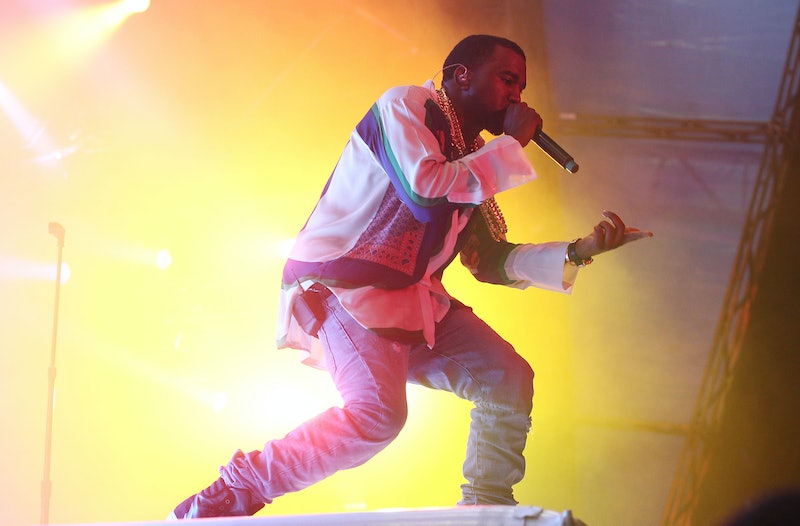 I've long been a Kanye West hater. While I respected and loved his music, I looked at his public persona as a complete joke. Like much of America, I never got past him jumping onstage at the VMAs and more recent "outbursts" like the one on Sway's radio show didn't exactly support a change of opinion. But now, I've finally witnessed West in concert for the first time ever and as a result, I've done a complete 180. And the sad part is it's all because of something I should have seen all along: extreme, unyielding passion.

Wednesday, when his sweet, subdued interview with Seth Meyers on Late Night went up on various celeb news sites, comments about wanting this "calmer Kanye" to stick around were rampant. Meyers spoke about working with West and connected his pleasant, loveable world to the rapper's, making him more accessible to the masses. And while the interview warmed my heart, the notion that West needs to be calm to be likable — a sentiment I would normally echo — left a sour taste in my mouth.

Yes, it's always pleasant to see a celebrity with a smile on his or her face. It's wonderful to know that they're not completely defined by their profession. It's wonderful to see them be happy and human, because we've elevated musicians and actors and other artistic celebs to this almost superhuman place. But I was offended on West's behalf that we, as a pop culture-consuming culture, were hoping he could come down to a level we deemed acceptable, a level where he wasn't challenging us with his lyrics or his dedication to being an artist, rather than a celebrity. How dare we, I suddenly thought.

And while I'd previously been in the boat of folks with zero respect for his behavior, I've always jumped at new Kanye music — the man is undeniably talented. If he's on SNL or the Grammys or some other televised performance, I'm staying home to watch it. When I missed the debut of "New Slaves" projected on a building mere blocks from my apartment, I shrugged it off as a dumb stunt, but I was secretly upset that I'd missed the opportunity to hear his new music first. But something elevated that notion Sunday, when I finally saw West in concert for the first time in my life during the final stop of his Yeezus tour: I saw West's passion in full effect and every rant and every seemingly self-absorbed comparison to the geniuses of the world finally made sense.

The show, which took place at Nassau Colesium just outside of Brooklyn and Queens in New York, was an explosion of art and design — a set you may have seen pop up on various music sites at this point, comprised of a cat-walk that lifts and lowers, "Mount Yeezus," and a circular projection screen hovering above it all like some sort of weather machine creating rain, wind, and snow. West's album was brought to life in spectacular relief, but I expected that. (Hello, I'd seen his "Blood on the Leaves" performance from the 2013 VMAs multiple times because it was just that good.) But it was what happened when the show eventually progressed to the string of older hits — the stuff that wasn't nearly as likely to blow fans minds the way the Yeezus tracks had — that truly changed my mind.

Perhaps it's because I was lucky enough to be right up alongside the stage, where I could see West's face — close enough to make eye contact with this seemingly untouchable artist. But more likely than not, it was West's actions. In this, the final stop of his North American tour (he's got five more in Australia in May), West let loose. He gave the audience a taste of his brand new "Drunk in Love (Remix)" verse and called out to his fellow Kardashian baby daddy Scott Disick in total adoring sincerity. He gave a genuinely inspiring speech (below) — not uncommon for his live performances — but one that felt far more grounded than his usual "rants."

"Sometimes I get a little frustrated" he started, before delving into a talk about his dreams, his use of the slave/freedom metaphor, and his struggle to get a start in the music industry because he "wasn't gangster enough." He spoke about how he's been advised to be more humble and how it feels robotic, eventually working his way to trotting out his favorite Michaelangelo metaphor about how people don't want him to try other artistic genres outside of music. But throughout this supposed "rant," there's no yelling. No anger. No forceful declaration that screams "please listen to me!" Because at his own show, West is able to speak to those who strive to understand his dream — however large, egotistical, and far-fetched it may be. He doesn't have to fight for the right to express those ideas, and so they come across as real, almost down-to-earth.

But it was more than his sincerity. Later that night, West stopped mid-performance to sign a fan's pair of Red Octobers — a physical manifestation of one of West's various dreams come true — and at the end of the performance he signed his mic and gave it to a man with a Yeezus tattoo. There was no sign of his understanding that he was being generous, like some shiny golden god giving a tiny taste of the good life to the little people. All that was on West's face was gratitude, pure and simple. And at the very end of his set, when he spotted two young women with a Team Kimye sign — on the night Kim Kardashian was in the audience watching her fiance perform — the pure, unadulterated joy on his face was palpable. When he looked out at his fans, these people who truly support his ventures both professional and personal, there was humility in the level of gratitude.

So while it's hard to stomach seeing West sitting on a talk show couch and comparing himself to Steve Jobs because it's uncomfortable — we've been taught that you should be sweet and humble and that his level of confidence is wrong — it's that confidence that has allowed him to turn his passion into an actual creation. And his humility exists, it just manifests itself in areas that matter greatly as an artist: in the love of his supporters.

While it's easier to accept West as a silly pop culture side show who's far too obsessed with fighting the natural progression of his celebrity status and far too vocal about believing in his own talents, accepting West for who and what he is will not only make the experience of seeing West on television and in magazines that much more enjoyable, it makes the experience of his first art — the music — infinitely more inspiring, as it should be.

More like this
Kim Kardashian Father’s Day Tribute To Kanye West Called Him “The Best Dad”
By Stephanie Topacio Long
Photos Of The 'Elvis' Cast vs. Their IRL Counterparts Will Have You All Shook Up
By Grace Wehniainen
Taylor Swift's “Carolina” Theme For 'Where The Crawdads Sing' Soundtrack Is Here
By Jake Viswanath
What Is Elvis Presley’s Net Worth? How The King Earned & Spent His Fortune
By Grace Wehniainen
Get Even More From Bustle — Sign Up For The Newsletter