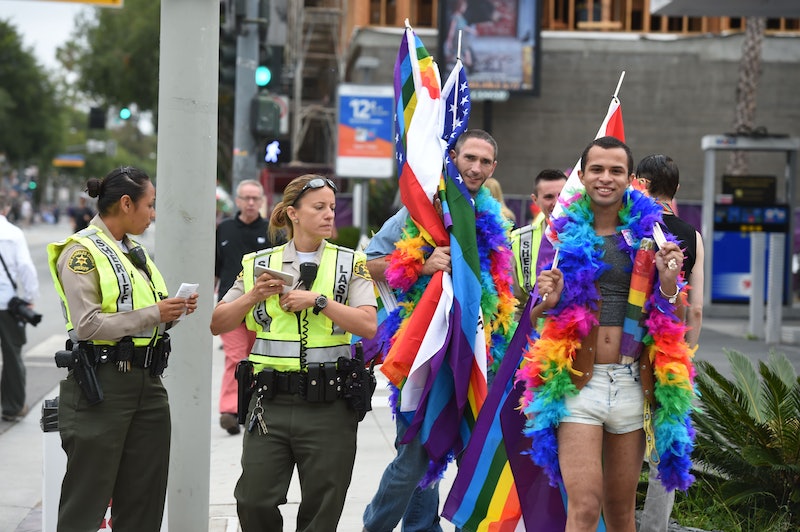 After Sunday morning's devastating shooting at the Orlando, Florida gay club Pulse that left at least 50 dead and 50 hospitalized, the Los Angeles Times reported that a man "with weapons and possible explosives" was arrested in Los Angeles. According to the Times, sources claim the man "said he was going to L.A. gay pride parade."

On Sunday morning, Santa Monica police were called to investigate "a suspected prowler." The Times reported that once they arrived on the scene, officers led a search on a car where they found "several weapons and a lot of ammunition as well as tannerite, an ingredient that could be used to create a pipe bomb." According to the outlet, the individual police encountered at the scene "made comments that he was in town for the Pride event in West Hollywood."

As the Times reported, there has so far been no link between this arrest and the shooting in Orlando. The Pulse shooter was confirmed dead at the scene in Florida, according to the Orlando Police. In the wake of the Orlando shooting, and the arrest in L.A., the Times reported that West Hollywood City Councilwoman Lindsey Horvath gave a statement that police are increasing security measures for the Sunday Pride parade and other similar events. The Times stated that "she said officials do not believe there is any threat around Sunday’s activities."

A tweet from a Buzzfeed News reporter at the parade showed a photo of people preparing for the event. The AP reported that L.A. Mayor Eric Garcetti said, at this time, the event will go on as scheduled, with the addition of a moment of silence for the Orlando Pulse victims.