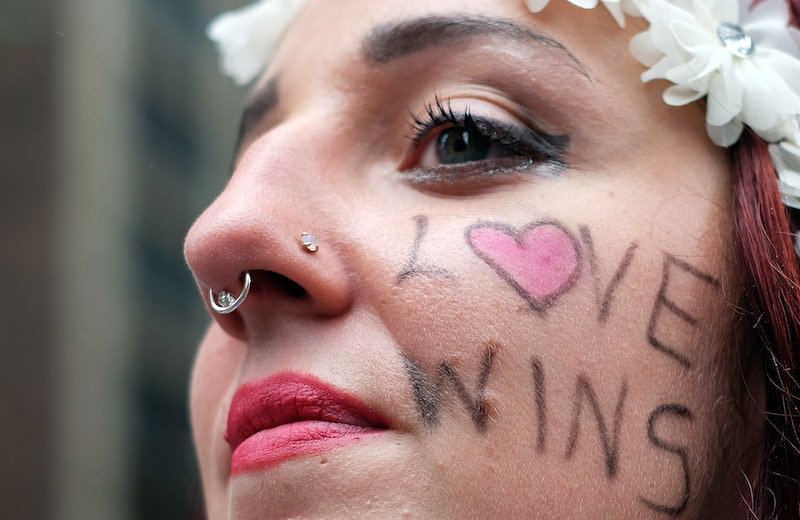 Early Sunday morning, a mass shooting at the Orlando, Florida gay nightclub Pulse left 49 people dead and over 53 injured. It is the most deadly mass shooting in American history. There has been speculation over whether the massacre was a hate crime against the people at the gay nightclub where the shooting took place, and ISIS has now claimed responsibility for the attack. What we do know for sure is that the gunman was identified by officials as 29-year-old Omar Mateen, and that he was shot and killed by police. The incident is currently being investigated as a terrorist attack.

Mateen's father came forward before ISIS's announcement to say his son was not driven by Muslim ideology, but he did tell NBC News something I find equally, if not more, disturbing: he mentioned his son had been upset after seeing two gay men kissing in Miami a few months ago.

"This has nothing to do with religion," Mir Seddique, Mateen's father, told NBC News. "We are saying we are apologizing for the whole incident. We weren't aware of any action he is taking. We are in shock like the whole country." Now that ISIS has claimed responsibility, we may be more likely to view this as a terrorist attack than a hate crime; in my opinion, that distinction may be entirely unnecessary. Hate crimes are a form of terrorism, and it's time we started talking about them as such.

LA Pride Parade is this Sunday, and it's Pride Month across the country. That the worst mass shooting in American history should take place at a gay nightclub adds yet another layer of poignancy and tragedy to what might otherwise be a celebration. As we stand in solidarity and prepare to march, it is worth remembering that in the face of such unspeakable violence, love can still trump hate. We have a long way to go, and our work may never be done. But we must always remember to believe in love.

I don't know about you, but all I can see is beauty.

More like this
Jujubee’s Humble Reminder
By Sam Ramsden
Megan Barton-Hanson On Bi-Visibility & The Need For LGBTQ+ Love Island
By Sam Ramsden
It Took Me 13 Years To Come Out – Here's What I Learnt Along The Way
By Rose Frimpong
The Families Of Grenfell Tower Are Still Waiting For Justice, Five Years On
By Bustle UK
Get Even More From Bustle — Sign Up For The Newsletter