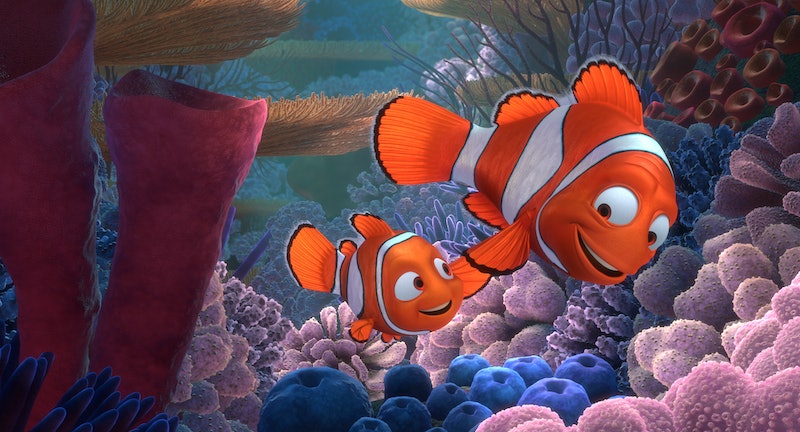 The under-the-sea world that Pixar created for its 2003 animated feature Finding Nemo is so urgently adorable that I briefly reconsidered my passion for fish tacos. (Briefly.) Though that movie didn’t put me off of seafood entirely, it did carve out a special space in my heart for a couple of expressive clownfish and their underwater allies. Finding Nemo features the voice talents of Albert Brooks, Ellen DeGeneres, Willem Dafoe, Geoffrey Rush, Allison Janney, and director Andrew Stanton, among many others. It took home the Oscar for Best Animated Film, but Disney and its affiliate studio didn’t rush to put a sequel into production. The Finding Nemo sequel Finding Dory arrives in theaters on June 17, over 13 years since audiences first met Marlin, Dory, Nemo, and friends. It’s been a while, so a Finding Nemo recap might be necessary.

As the title suggests, Finding Dory puts the focus on the breakout character of Finding Nemo: Ellen DeGeneres’s lovable and forgetful tang fish. While I doubt that — as family entertainment — Finding Dory will have a plot that’s difficult to follow, it would probably increase your enjoyment of the film to remember what fishy exploits went down in the first one. This recap of Finding Nemo will refresh your memory of the Pixar classic just in time to lose yourself in its sequel.

Like a lot of Pixar movies, this one also starts with a family tragedy. Clownfish Marlin loses his wife and all but one of their eggs to a barracuda attack.

Except His Son Nemo

Understandably, Marlin is overly protective of his only son, Nemo. But Nemo is an adventurous little guy and too young to understand the rational reasons for his dad's fears.

Marlin's worst fears are realized (again) when Nemo swims too close to the surface and is swept away by a scuba diver's boat.

Marlin Meets A New Friend & They Escape A Shark Attack

Marlin immediately takes off after Nemo. He finds an unlikely partner in Dory, a bright blue tang fish with some short term memory issues and a positive outlook. ("Just keep swimming.") They meet some sharks who claim to be on the wagon, but a little bit of blood starts a potential feeding frenzy. The ocean is dangerous, y'all.

The scuba divers leave behind a clue, and suddenly Marlin and Dory have a destination. They hitch a ride in the East Australian Current on a young-at-heart sea turtle named Crush to get to "P. Sherman, 42 Wallaby Way, Sydney."

Nemo Becomes A Resident Of An Office Fish Tank

"P. Sherman" is Phillip Sherman, D.D.S. The dentist adds Nemo to his colorful collection of sea life, all of whom are planning a jail break.

Demo Is Doomed To Be Given To Darla, Dr. Sherman's Aggressive Niece

Pigtailed, brace-faced Darla is feared by all the occupants of Dr. Sherman's aquarium. She accidentally murders fish by shaking their bags too hard. (Who says this movie isn't dark?) The escape attempt fails, and it seems that Nemo's fate is sealed.

Still on their mission, Marlin and Dory are swallowed by a blue whale. Dory saves their lives by communicating with the animal, who helps them reach their destination a little faster.

Marlin and Dory enlist a brown Pelican named Nigel to help rescue Nemo from Dr. Sherman and Darla. In a last-ditch effort to save himself, Nemo plays dead to keep the girl from taking him home. Marlin thinks he's lost his son for good, so he swims off for home. Dory, who has no one, pleads for him to stay.

Dory Finally Meets Nemo, But Doesn't Remember Who He Is

Nemo makes it back to his ocean home and runs into Dory. Unfortunately, Dory's memory problems are flaring up and she greets Nemo like a stranger. Then she sees "Sydney" on a drainpipe and remembers their adventure. Dory reunites Nemo and Marlin, but is caught in a fisherman's net in the process.

Nemo leaps (or really, swims) into action and frees Dory from the net. Marlin realizes that he can care for his son and also let him spread his fins a bit. They resume their life back at the Great Barrier Reef with Dory in tow. Back in Sydney, one of the escape attempts of Dr. Sherman's captives finally succeeds...to a point.

Finding Nemo has that comforting Disney happy ending, but the story isn't over. Where is Dory heading off to, and can Marlin and Nemo bring her home? I'll be at the movies this weekend to find out.