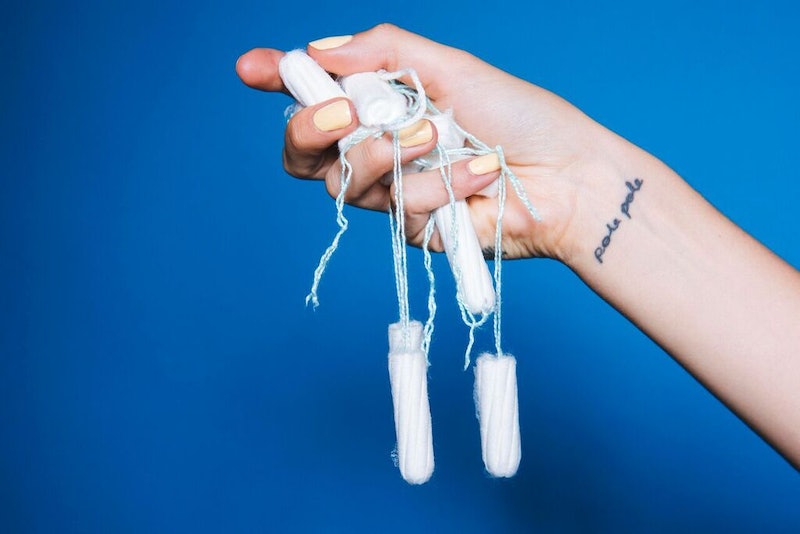 We all know periods aren't fun. These beacons of fertility can ruin your underwear (if you don't have the right protection) and serve as a reminder that one day you may be pushing a watermelon-sized creature out of a non-watermelon-sized hole. Starting with PMS, you're swinging on an emotional pendulum where you simultaneously want to punch someone and be smothered with puppies while eating a burrito. Considering the emotional and physical stress of it all, it's no wonder we've invented a series of period code names.

While there's a lot that's not awesome about having your period, there's a way to focus on the lighter side of the experience, even when your flow is anything but light. We've teamed up with Tampax® Pearl to come up with a list of code names for your period that go beyond your old standby, "That Time of the Month." So tell "Aunt Flo"— which no one calls it anymore — to zip up her fanny pack and take her cardboard tampons elsewhere because we need an upgrade.

Tampax® Pearl has already supplied that upgrade with tampons that stop leaks before they happen, and we're doing our part by supplying you with this list of objectively funnier code names for your period, because we all need a laugh while riding the crimson wave.

A period piece, causing one to sit on a couch for hours and observe that what happens downstairs is often more dramatic than what happens upstairs.

Some days period cramps aren’t so bad. Other days it feels like the nine circles of hell are blazing in your lady box.

While on this sacred, ebloational (emotional and bloated) roller coaster, you and your uterine lining are in this bloody hell together.

This idiom supposedly dates back to the early 17th century, when western military forces would fly red flags to signify that they were preparing for battle. Kind of like the battle your body wages on itself every 28 days.

If our favorite fictional bloodsuckers would calmly sip nature’s monthly brew instead of biting into exposed necks, they wouldn’t have such a bad rap.

6. The Redcoats Are Here

In this scenario, PMS is referred to as “Paul Revere-ing" — your period hasn't come yet, but you have intel that the British are about to invade.

A “period” is an overly tame punctuation mark to describe what you go through every month. An exclamation point (and its added emphasis) feels a bit more appropriate.