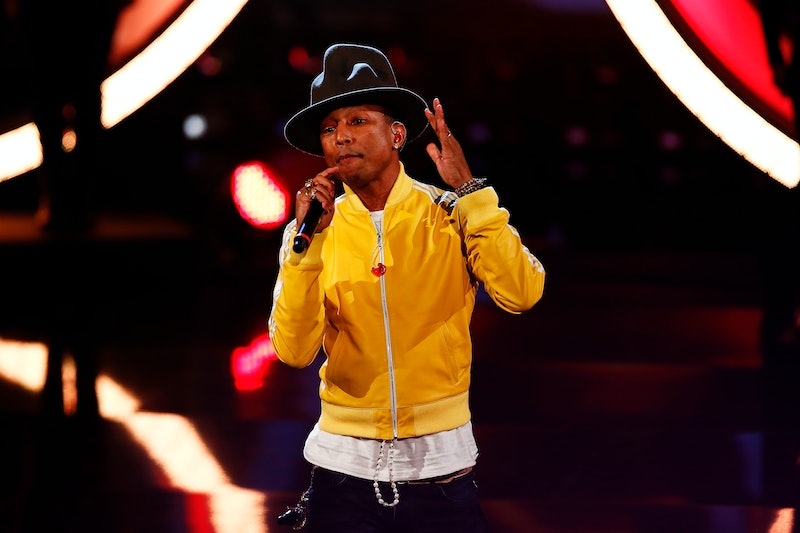 In the first song he declares "can't another good boy keep it this thorough?" He's talking about explaining himself and how he really feels, as a human being, about women. Not about their looks, or their bodies, or their ability to shake dat ass — but about the connection he feels with a person when it's actually right and how that is the most important thing to look for in a romance partner. And it is motherfucking astounding, because Pharrell Williams' latest, G I R L , is the unexpected, empowered feminist summer jammer you won't be able to stop dancing to — really!

Earlier in the album's first track — the funked out "Marilyn Monroe," Williams croons, "This one goes out to all the lovers / What can we do? We're helpless romantics / We can not help who we're attracted to / So let's all dance, and elevate each other." Not only is it a funkytown groove machine that caused so much dancing around my apartment I broke a sweat, it's thoughtful and about more than just the physical. *Record screech* From the guy who said those things about "Blurred Lines"? I know. But seriously: it works, and it's here, and it's exactly what it is.

There is, from my 2 listens (thanks to the free iTunes Radio stream), nary a reference to dropping it like it's hot or wanting video vixens. There's maybe one objectification of a woman's physical form ("light that ass on fire") or ladies as playthings. Instead, Pharrell has given us an album full of danceable, hook-laden tunes that treat us ladies as sexual and mental equals as well as independent humans who should do what (or whom!) they want when they want. Did anyone ever think an album about mutual pleasure and clear communication skills in the bedroom would be this much of a dance party-ready banger? Maybe that big hat of his was sized just-so because that's where he was hiding all of these modern thoughts and ideas.

Stand-out tracks include the Justin Timberlake tune "Brand New", the aforementioned "Marilyn Monroe," and "Come Get It Bae" featuring Miley Cyrus. And he gets bonus points for declaring that he's looking for a feeling rather than a face in "Monroe." And "what's wrong with that," he sings? ABSOLUTELY NOTHING, HONEY. Good luck trying to do anything but move around in a dance-like motion when any of those three tunes come on. To say nothing of how "Happy" is, of course, elation musicsonicified.

"Lost Queen" is also something to get excited about. Williams has no problem putting his more vulnerable thoughts into lyric, explaining "I don't have a problem with multi-taskin' / Takin' care of you is my number one passion / Put it before my eyes, you know I'ma smash it / Only if you want it, want it." In addition, he talks about ... making sure the girl gets some, too? Say what? "And right before we finish, I'll ask you did you get it / Ain't gotta ask me to."

That's not to say it's all perfect or without some eyebrow-raising business. Some songs — "Hunter" — leave a bit to be desired (and will cause a few upturned noses with some of its lyrics regarding "I never smelled this before") thanks to sentiments like "if I can't have you nobody can." Or "Gush" (which, yes, shudders all over and not in the good way. Also I'm five years old and also the word "gush" is the worst) which is certainly, um, brusque in its messaging. Though the song is not totally bereft of positive sentiments: "I could be the guy to treat you / To a nice movie, feed you / But I don't wanna mislead you / Tonight I think I wanna be dirty, girl / Do you wanna get dirty, girl?" And, hey, bonus points for singing the word "intimacy" a few times, too.

Overall, we'd go ahead and call this one a win for the ladies, and a solid offering from Williams. A fun and funky one, at that! Will some people have a problem with it? Sure — nothing's perfect. But you know open communication is key so maybe we all take this as a conversation starter (if you're feeling philosophical) and a seriously fresh batch of funky discoified goodness.