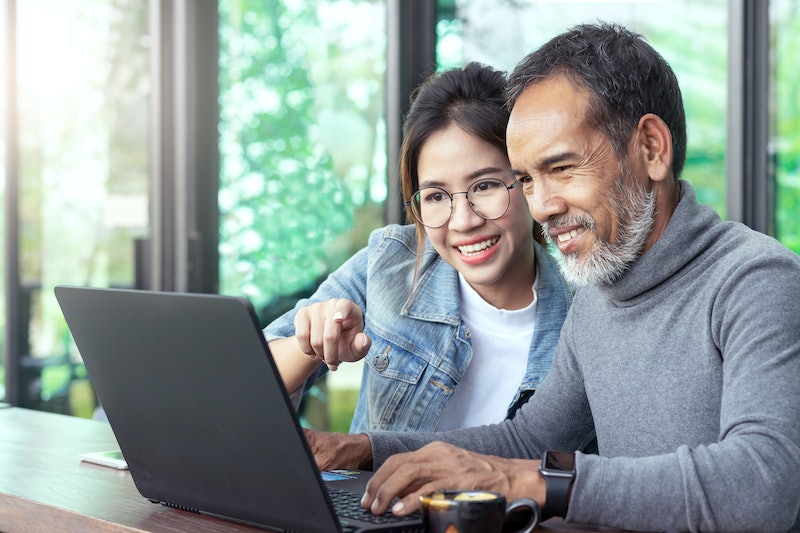 If you're a Facebook user, you know exactly what your feed is going to look like on June 21: dads, dads, and more dads. If you're going to be joining in the social media festivities, you should definitely consider posting one of these 11 Father's Day quotes to share on Facebook alongside that adorable and priceless picture of your pops and you.

Social media can be a real buzzkill sometimes (I can't be the only one who gets annoyed when friends stop enjoying the beautiful moment they're in to instead take a photo of it to post online, can I?), but I do think that it can be a wonderful place to share feelings about those you love, especially when it's a national holiday.

I also don't think you should live for "likes," but let's be real, a killer combo of your dad holding you as a baby and one of these stellar quotes is going to keep them rolling in steadily. We can all stand behind some father-daughter love, and thus, we will all push that little blue thumbs-up button that makes us feel more validated. But really, you guys, share a quote and show Dad how much you love him in the realm of hashtags and likes.

1. "I believe that what we become depends on what our fathers teach us at odd moments, when they aren't trying to teach us. We are formed by little scraps of wisdom." — Umberto Eco

2. "Sometimes I think my papa is an accordion. When he looks at me and smiles and breathes, I hear the notes." — Markus Zusak

3. "The heart of a father is the masterpiece of nature." — Abbé Prévost

4. "Listen, there is no way any true man is going to let children live around him in his home and not discipline and teach, fight and mold them until they know all he knows. His goal is to make them better than he is. Being their friend is a distant second to this." — Victor Devlin

6. "A father’s tears and fears are unseen, his love is unexpressed, but his care and protection remains as a pillar of strength throughout our lives." — Ama H. Vanniarachchy

8. "But maybe that's how the world changes, Isaiah. One father, one child, at a time." — Barbara Samuel

9. "It is a known fact that every man's heart is set on having a daughter." — Françoise Sagan

10. "I also want you to know that a father isn't someone who helps produce a child. It's the person who loves that child and raises them as his own." — R.D. Cole

11. "A father is only capable of giving what he has, and what he knows. A good father gives all of himself that is good." — Vincent Carrella

This article was originally published on June 18, 2016