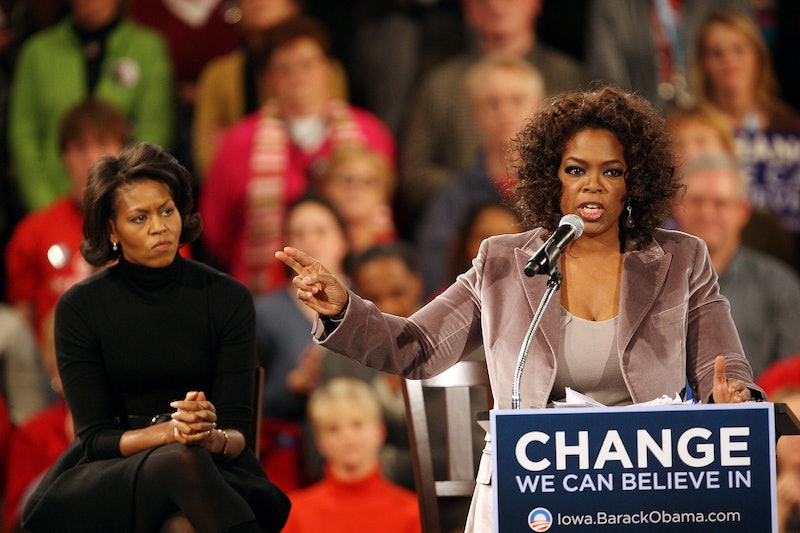 Tuesday is an important day for women everywhere, as the White House is hosting a special summit called the United State Of Women. Some of the most incredible, kick-ass women in Hollywood are attending the event, including Oprah Winfrey, Amy Poehler, Kerry Washington, and Shonda Rhimes, to talk about issues that continue to affect women and girls all over the world. The fact that so many women in Hollywood are attending the event highlights the very real need to address the way women are represented in pop culture and the media.

The United State Of Women website says that the aim of the summit is to "rally all of us together to celebrate what we’ve achieved, and how we’re going to take action moving forward." It's exciting to see the White House focussing on feminist issues, such as access to healthcare, education, and innovation, as well as giving women everywhere a voice. Addressing the summit on Tuesday, Vice President Joe Biden said, "We have a worldwide problem... Changing laws isn’t enough. We have to change the national culture. We have to take off the social blinders that make it easy for people to overlook sexual violence."

And it's absolutely true. The way women are perceived on TV and in movies directly influences the way women are treated in real life. In particular, if women aren't given the same opportunities as men in our media, or they're given less visible roles, a silent form of misogyny is reinforced and assumed to be the norm. As Biden stipulates, it's time to draw people's attention to problems that are faced by women on a daily basis, because returning to, and highlighting, crucial issues is the only way that change can happen. Proactivity is key.

From discussing equal pay and childcare to speaking about the prevention of violence against women on campus and at home, the United State Of Women Summit highlights issues women continue to struggle with. Everyday injustices, such as the struggle for equal pay, remain unchanged, proving that feminism still has a long way to go. It may seem like a small step comparatively, but it is important in its own way that Tuesday's summit includes prominent female actors and showrunners. It's important in its own way to highlight the huge need to ensure women are represented accurately in pop culture. Ensuring that the women we see on TV are strong, complicated, passionate, and ambitious is one of the ways we can empower people in real life.

No one understands or fights for this issue more than Shonda Rhimes, whose Shondaland empire is almost singlehandedly altering the television landscape when it comes to women playing lead characters. It might seem like a small thing to some that, for example, the majority of superhero movies are led by men, but what is that telling the young women and girls who watch those movies? Isn't it time that real equality was enforced, and that women truly had the same rights as their male counterparts? One of the many ways we can start to achieve this is by destroying the stereotypes about women that pervade the media and pop culture — such as that they can't lead an equal number of superhero franchises of their own.

In May 2016, Shonda Rhimes spoke to New York Magazine at Vulture Festival on the topic of writing strong female characters. Rhimes said, "I get asked this question so much, and it’s like, 'How do you create such smart, strong women?' I’m like, 'Is the alternative weak, stupid women?'" Her talk at Tuesday's Summit is sure to be just as awesome, and alongside the likes of Oprah Winfrey and Amy Poehler, Rhimes will reinforce the fact that change only happens if we make it happen.

The United State Of Women Summit can be live streamed on Tuesday, and is most definitely worth watching. As Joe Biden said at the start, "Every single solitary thing a man can do, a woman can do as well." Is there a better, or clearer, message than that?

More like this
What Is Barack Obama’s Net Worth? He Makes *Way* More Now As An Ex-President
By Hugh McIntyre
Sandra Bullock, Girlboss Extraordinaire
By Matt Harkins & Viviana Olen
The 'Hocus Pocus' Sequel Finally Has A Release Date & It Makes Total Sense
By Shannon Barbour and Radhika Menon
Harry Styles Called For "Backlash" In Powerful Statement On Abortion Rights
By El Hunt
Get Even More From Bustle — Sign Up For The Newsletter