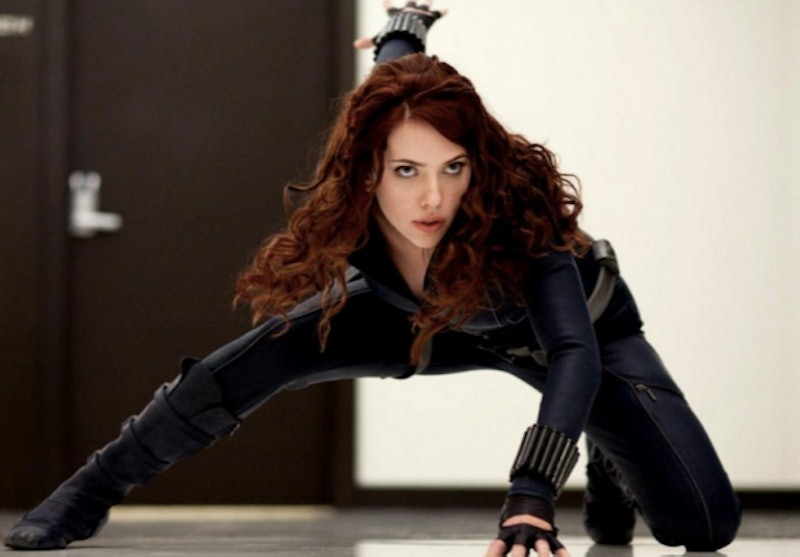 I used to love comics. As a kid, I was a bit of a collector, devouring series like Gen 13, Generation X, and Buffy The Vampire Slayer. While comics themselves have incorporated some kick-ass feminist moments, superhero movies consistently disappoint me with their lack of feminist vision. Despite having the perfect platform from which to really engage in a discussion about feminism, time and again superhero movies focus on male characters. There are some exceptions, with Scarlett Johansson's Black Widow appearing many of the recent Marvel movies (yet notably none of her own). Why, exactly, are there so many anti-feminist moments in Marvel movies?

Johansson's Black Widow is a great example of implementing feminism where there was little opportunity to do so. Objectified in the extreme, consistently sidelined in favor of her male counterparts, it's a wonder that Johansson has managed to do so much with her character. Slowly, she has proven herself to have staying power in the superhero movie arena, moving away from criticism regarding her sexualized outfit and bad wigs to be a real feminist bad-ass. But what are some of Marvel's most anti-feminist moments on screen to date?

While all of the Avengers dealt with flashbacks to their previous lives in Avengers: The Age Of Ultron, Black Widow's was by far the most brutal. The revelation that she'd been sterilized against her will was not enough. She also had to lament the fact that she couldn't have kids — something that her character had never shown any signs of holding as important in any movie before — and which she thought would mean Bruce Banner wouldn't love her.

Is Pepper jealous of the women Tony Stark sleeps with in Iron Man? Sure. But that doesn't excuse her anti-feminist slam downs. Why, for instance, is she not referring to Stark as the trash in this situation? He's the one that continues to treat women as throwaway objects he's entitled to.

Hope in Ant-Man is a natural fighter, and an incredibly smart and funny person. So why draw attention to her looks?

4. Hope Not Being Allowed To Wear The Ant-Man Suit

Despite being better equipped to fight crime in just about every way, Hope is not allowed to complete the mission as Ant-Man. Is her father being overbearing in order to protect her? Definitely. Does it look as though she might get to wear a suit of her own in the next movie? Thankfully yes. But that's not the point. It makes no sense that Hope is passed over for the role of Ant-Man in favor of some guy with no skills whatsoever.

In a Marvel superhero movie, it's common place for the female characters to have mundane familial drama to deal with. In Ant-Man, Hope's biggest story is tied to the fact that she's fallen out with her dad. Yawn.

OK, I get it. Iron Man is a misogynist by nature. Womanizing is integral to his character. He's rich and successful and women love him. But that doesn't mean that it's not beyond time his sexist BS had a shake-up, and by something other than the One Woman he holds above all others and respects enough to respect.

Black Widow's main story line in the second Avengers movie revolved around her hooking up with the Hulk. While I want her to have love in her life, I'd also like it if she was taken seriously as a powerful woman, rather than being palmed off with a poor rom-com plot.

9. Captain America Asking Black Widow To Find Him A Date

10. Rogue's Powers Preventing Her From Making Out

When you think about it too much, it's pretty sexist that Rogue in X-Men has to abstain from even kissing anyone, otherwise she'd drain them of their life force. It's also kind of inappropriate that Wolverine would ask Rogue and her boyfriend how they hook up. As a father figure, he probably shouldn't pass comment on Rogue's sexual history.

We need a Black Widow movie, and we need one now.

I'm hopeful that one day, superhero movies will embrace equality, and stop forcing men and women into outdated gender stereotypical roles, in favor of something more real. Until then, at least these movies are amazing in every other way.