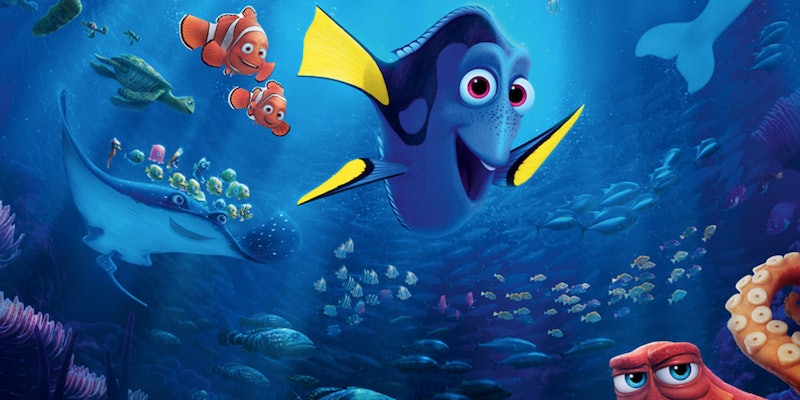 Children's movies will occasionally throw in an adult joke or two as a way of keeping parents engaged during an otherwise kid-focused story, and the new Pixar movie Finding Dory utilizes this trick by including a running joke in which the characters bring up Sigourney Weaver. Now, most child viewers obviously won't recognize the actor's name, but parents will make the connection to the fact that Weaver is known for her narration of nature and animal documentaries. It's a funny recurring mention, but what does Sigourney Weaver think of Finding Dory and its references to her work?

The actor has not yet issued an official statement or given any interviews about the film, but there is reason to believe that she approves of Finding Dory's use of her name. (Bustle has reached out for comment, but hasn't heard back at this time). You see, Weaver is not only mentioned in the movie; she actually lends her voice to it. The actor plays herself as the narrator of a recording that plays on loop at the marine life institute, which is home to several characters in the film. The use of Weaver's vocals is obviously a reference to the fact that she is a conservationist and has previously lent her vocal talents to documentaries such as Planet Earth .

In fact, it was Weaver's involvement with such documentaries that made the Finding Dory filmmakers think of her in the first place. Collider reports that, at a recent press conference, the Finding Dory team revealed that they initially used Weaver's name as a joke because she is "the David Attenborough of this country, doing narrations for nature." The joke kept growing along with the movie, until finally filmmakers decided to reach out to Weaver herself, and she agreed to participate.

In the recording at the Marine Life Institute, Weaver's voice explains that the center is not primarily a place for entertainment, but for the "Rescue, Rehabilitation and Release" of ailing marine animals. This is a real-life motto of some wildlife refuge centers, which shows the level of care that filmmakers took to achieve a realistic backdrop for an otherwise fantastical story. And the inclusion of Weaver's well-known voice gives an extra level of legitimacy to the fictional Institute.

Given her willingness to participate, it seems like Weaver was a good sport about being the subject of a gentle joke in the movie. Adult viewers of the film will appreciate the cameo, and might also get a kick out of the fact that there's even a track on the Finding Dory soundtrack called "Sigourney Weaver." As for the children watching the movie? The reference will likely go over their heads, but given how great Finding Dory looks, I have a feeling that the missed joke won't matter.