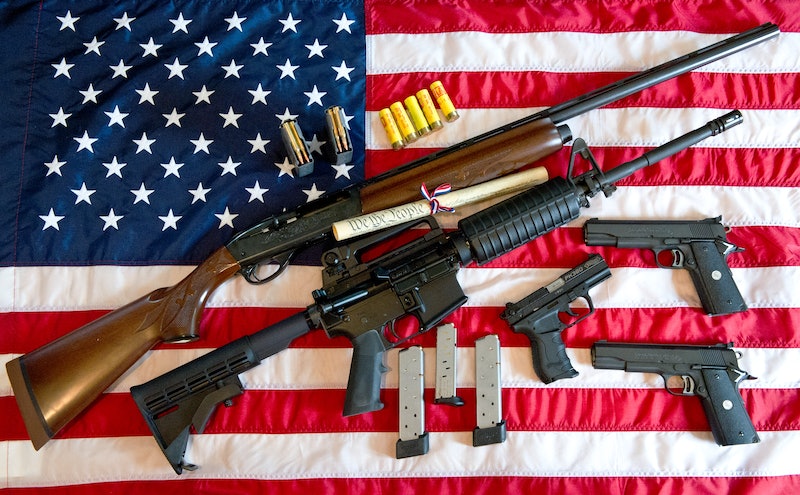 After Sunday saw the worst mass shooting in U.S. history hit an Orlando gay nightclub, many are grappling with how to respond. While there's a stream of grief, anger, and despair, there are also a number of activists who are trying to encourage gun control reforms in the wake of such a terrible attack. One recurring argument for a gun control overhaul takes a cue from Australia — and it's been getting more attention as Americans struggle to find a way to prevent another attack like the one in Orlando from happening again.

On April 28, 1996, Australia suffered the worst mass shooting in its national history — 35 were killed and 23 were wounded in Port Arthur, Tasmania, in what became known as the Port Arthur Massacre. The tragedy prompted a massive effort, led by Prime Minister John Howard, to pass the National Firearms Agreement. As noted in an NBC News report on the Port Arthur Massacre, that legislation "outlawed automatic and semi-automatic rifles, as well as pump-action shotguns." The government also instituted a buyback, which retrieved more than 640,000 firearms. Josh Butler, acting politics editor at Huffington Post Australia, decided to remind Americans that the United States might want to follow Australia's lead in a tweet that has gotten significant attention, retweeted more than 20,000 times at the time of writing.

Butler did the grunt work of coming up with an exhaustive list of mass shootings (that is, indiscriminate attacks involving four or more victims) that occurred in Australia since their government passed the extensive gun control measure. You can see the fruits of his labor below.

Note: There's nothing wrong with your computer screen. The list, as the image in Butler's tweet states, is "intentionally left blank" because there haven't been any mass shootings (based on that aforementioned definition) in the country since 1996.

As Will Oremus wrote for Slate in the aftermath of the 2012 shooting at Sandy Hook Elementary School, Australia's policies after Port Arthur and accomplished significant positive changes for the country's safety:

What happened next has been the subject of several academic studies. Violent crime and gun-related deaths did not come to an end in Australia, of course. But as The Washington Post's Wonkblog pointed out in August, homicides by firearm plunged 59 percent between 1995 and 2006, with no corresponding increase in non-firearm-related homicides. The drop in suicides by gun was even steeper: 65 percent. Studies found a close correlation between the sharp declines and the gun buybacks. Robberies involving a firearm also dropped significantly. Meanwhile, home invasions did not increase, contrary to fears that firearm ownership is needed to deter such crimes. But here's the most stunning statistic. In the decade before the Port Arthur massacre, there had been 11 mass shootings in the country. There hasn't been a single one in Australia since.

Granted, there's certainly no such thing as a perfect solution to the multi-pronged threat of intersectional hatred, violence, and fear. No one can claim there's a perfect piece of legislation to prevent all of the damage that can be inflicted by guns — but Butler's tweet reminds us that it's clear that some action, any action is truly better than nothing.