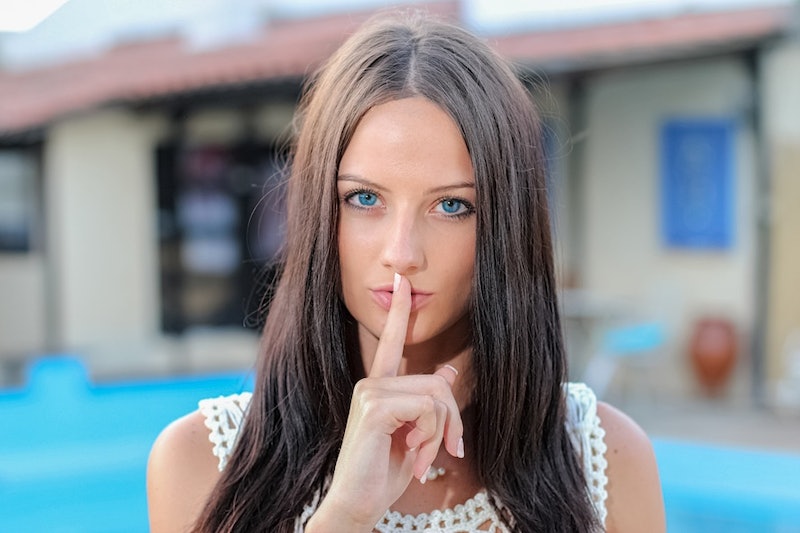 You wouldn't poke an angry bear (I hope). So why would you poke an angry partner?Not giving someone time to cool off is like asking them to hurt your feelings. It's not the right thing to do when you're mad at each other. Being mature in an argument isn't always easy. Using good communication skills and mature problem solving skills isn't as satisfying as getting the last word in or telling your partner what's up.

All that drama doesn't really do anything, though, except get people riled up. Effective conflict resolution makes your partnership stronger and your future easier to navigate. I learned this times a million when I worked with couples as a Domestic Violence Victim Advocate and Planned Parenthood Certified Responsible Sexuality Educator. I also learned that it makes you feel like problems are resolved for good instead of just getting frustratingly rehashed every few moths. It also gives you and your partner the trust and confidence to talk about the things that bother you in a safe environment. It's what those partners who say, "I feel like I can tell you anything" have. That's crucial to building trust. And we all know that a relationship without trust is one that's just waiting to fail.

Check out this list of things you're doing wrong when you get mad at your partner and see if you can't tweak your arguments to make them into tools for positive change instead of reasons to start inappropriately day drinking.

Everyone has their own fighting style. Some people need to stand and fight, but others need time to cool down and figure out how they think and feel. If you're a "stand and fight" and your partner is a "take a time out," then you can't force them to stand and fight. Let them talk to you when they're ready. Otherwise instead of hearing their truth, you're going to push them to make snap judgement and say things they might not even really believe. That's not going to solve anything. It's only going to make things worse.

This is basically "stand and fight" in reverse, but with a twist. If your partner likes to stand and fight and you need space, you should definitely take space. But you can't take the whole galaxy. At some point, sooner rather than later, you need to face what's happening and have that conversation with your partner about the problem at hand. Don't stew and wallow. Don't avoid the conflict. And while you're thinking things over, remember your aim is to resolve, not win.

Sometimes, for the love of all things sparkly, you need to just shut your mouth. Close your face. Put your lips together and squeeze. Stop talking at your partner and start listening. If you're a lecture queen (or king, or whatever lecture royalty you prefer) then you need to realize that about half of your lecture (if not more) is just for you. Your partner probably stopped paying attention an hour ago. In a healthy relationship, both partners get to talk. It's a give and take. It's not a sermon. It's not the "I'm Mad, Hear Me Roar" show. It's the "How Can We Solve This Problem Together" show. Not as satisfying, I know, but welcome to adulting.

Your little temper tantrums over not getting your way may have been effective in your preschool days, but as a grown-ass person in a relationship, they're no good. You're not single. Your decisions don't just affect you anymore. That means you need to learn to compromise, to change your mind, to change your plans, to go with the flow, and mostly to accept that sometimes it's not about you. Your partner has just as much of a right to the things they want (and just as much responsibility for learning to compromise). So suck it up, buttercup. Sometimes you don't get to have everything you want, exactly how you want it. Real talk.

Yes, you do have to compromise. And even occasionally do things you don't want to do. But you also don't have to lay down and not say anything. When you're mad, be mad. You can be mad at someone and love (and respect) them at the same time. I like to tell people to make sure they get their half. Compromise means you give a little, but also that you get a little. Sometimes that means you get to be angry, and express why, and say what you need, and your partner needs to really hear you.

Your anger should never scare your partner. If it does, it's not anger, it's rage. Rage is not something that should be popping up frequently in the everyday disagreements that come with being in a relationship. If it does, you need to talk to someone about why you go from zero to raging bull, and how you can deal with that. Rage can lead to something potentially dangerous. Not cool.

Don't do it! Internet drama never makes any situation better. Plus, it tends to linger. You'll be over your anger, and then a week later, some friend who was late to your drama party will post something like, "I never liked them anyway." And then more drama will ensue. Plus, if you're mad, you're probably going to say some stuff you don't mean, you can't take back, and that can be wildly misinterpreted. It's called being passive aggressive, and it's not a healthy way to deal with your problems.

This is passive aggressive behavior. It's what people do when they're not ready, able, or willing to express what they're feeling in a direct way. It's showing anger by slamming things around. It's showing sadness by crying, but say "nothing" when your partner asks you what's wrong. It's acting like you hate your partner when they have no clue what they did wrong. Sometimes we don't realize we're dong it, but sometimes we do. With practice, we can learn to be direct about how we feel, even if being direct means saying "I'm mad, but I'm not ready to talk about it yet."

9. Bring Up Everything Bad That's Ever Happened In Human History

When you're mad at your partner for not doing the dishes, does the argument devolve into that one time, three years ago, when they flirted with another girl right in front of you? Pause. Reorganize. It's hard to do in the moment, but if the thread that connects those two things is that they made you feel disrespected, then say you feel disrespected. Don't dig up the past just to dig it up. Aside from bringing up old feelings that add fuel to the fire, your partner will feel like you're blaming them for way too much, and that you can't let things go that were supposed to be resolved.

I love being the victim. Gosh, I love it. If I don't check myself, I will be sad and hurt and milk my partner for all the kindness and apologies I can get. This is not healthy. If your partner was sincere in their apology, and you've resolved your issue, you need to move on. You can still feel how you feel (as long as you're not wallowing) and not continue to make your partner feel guilty. Your life is not over. Your partner is not your enemy. You got enough flowers and compliments. Move on.

I feel like this goes without saying, but it something easier said than done. When you're calm, you might be like, "I would never disrespect my partner," but then when you're angry, you might turn into that person who calls their partner names or says really hurtful things. Your partner deserves respect, no matter what you're arguing about. If you can't give that respect, you need to take some time and come back when you can. Anger isn't an excuse for emotional or verbal abuse.

There's so much to learn about being a grown up in a relationship. But it's the kind of useful stuff that can only make your life better. Unlike math.