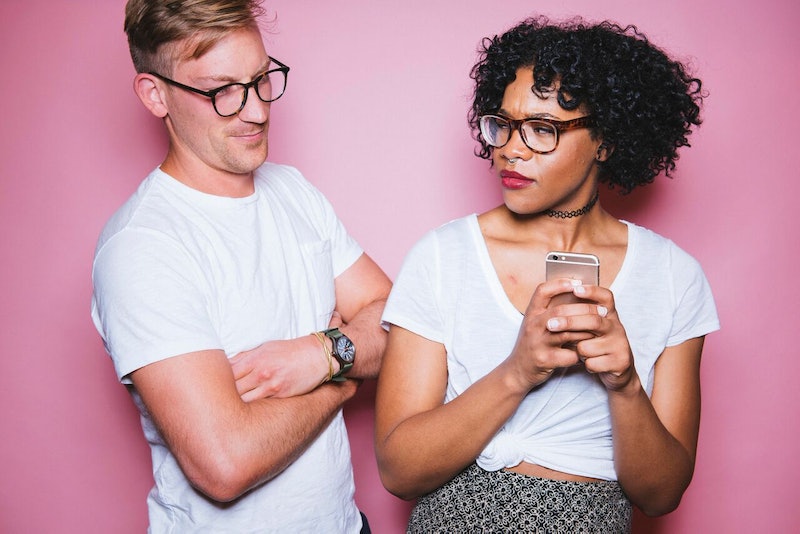 If you and your SO are in a constant state of turmoil, then it may be time to cool it on the argument front. That's because not everything is worth fighting about in your relationship. Sometimes it's best to let things slide, or come to some healthy agreements.

Of course, I'm not saying you should never disagree. Some tiffs are totally necessary, and hashing things out can even be healthy. After all, you don't want to sit around passively while your SO does things you wholeheartedly disagree with. But arguments can get out of hand, and they often do. In fact, one study from the UK showed that the average couple argues a shocking 312 times a year, according to the Daily Mail. Do the math on that, and you'll find it adds up to about six fights a week. Not cool.

The most common source of these arguments? Minor irritations, such as leaving wet towels on the ground, or flicking through TV channels. I agree that such things are super annoying to deal with, but these stats also made me take pause. Are we really focusing on such minor things to the point of fights and hurt feelings? It just doesn't seem worth it.

Whether the issue is big or small, it's much easier to reach an agreement and move on, instead of arguing endlessly for the rest of your lives. Once both parties are happy, you can live an argument-free life, and doesn't that just so sound much better?

If you'd like a little less drama, then here are some things you guys should stop arguing about. Plus, some tips on how to reach some resolution.

1. Who Should Do The Dishes

There's no point in arguing over chores, because like it or not, they need to get done. So if they're a constant point of contention in your relationship, then it may be time to make a chore chart. (Yes, like the kind you had as a kid.) A chore chart can create some pretty clear expectations, and leave everyone feeling like life is fair — as long as you've fully agreed upon who will do what. As Marie Hartwell-Walker, Ed.D. said on Psychology Today, "Couples who do the least arguing about housework are those who have talked about it and made choices together." So agree upon who will wash those dishes, and then move on with your lives.

2. Which Restaurant To Go To

Choosing a restaurant can turn into a lifelong issue if you aren't careful. That's because two brains are involved, and those two brains are vying for the right nutrition. As Patrick Allan said on Lifehacker.com, "... your brain is comparing tastes, determining what nutrients it needs, and finding new ways to make things like this more complicated. Now, add in the fact that you're with at least one other person going through the same process and things get pretty complicated." See? It can be an unending thing. That's why you need a system, in order to put a stop to the madness. Consider trading off on decision-making duties, so each of your food-y needs can eventually be met.

3. How To Split The Bill

If you just had a nice dinner, then why ruin it with an argument over the bill? Not only does it spoil the evening, but it's also something so easily avoided. Simply decide ahead of time how you and your partner plan to divvy up the check. Maybe whoever invited should doing the paying? Or you should always split it 50/50? Figure out which rule feels right, and save yourselves the strife.

4. What To Watch On Netflix

I don't know about you, but I could spend the rest of my life shuffling through all the choices on Netflix. Add someone else into that mix, and, well, things can get complicated. That's why I recommend the same sort of approach you use when choosing a restaurant. Let your partner choose the movie one night, and then you choose the next. That way it's always fair.

5. Who Takes Care Of The Pets

The pets needs to be taken care of, so clearly the answer should be "both of you." But what if you've entered into a relationship with someone who has pets when you don't want pets? When that's the case, try to reach some middle ground. Discuss walks and feeding schedules with your partner, and try to reach a happy agreement that can help avoid resentment.

6. What To Do On Vacation

Vacations are supposed to be fun, so spending them arguing is totally not worth it. That's why planning ahead is key. As Sebastian Canaves said on the travel site Off-the-path.com, "It is really important to plan the ... journey thoroughly to avoid misunderstandings." Consider things like budget, city versus country, and how much you plan to do. Once it's settled, you can hopefully enjoy your vacay, argument-free.

7. Whether Or Not To Have Kids

OK, so this is obviously a big topic. But just like the rest, it isn't worth arguing about. Why not? Well, because it is such a big topic, you guys should reach an agreement early on. If you disagree, but decide to stay together, then great — you should both live with the decision (sans resentment). If you can't happily agree, then be ready to move on. After all, choosing not to have children should come from your heartfelt desire not to have them, according to Amy Rodman, LICSW, on HuffingtonPost.com, not because you begrudgingly agreed.

8. That Thing You Misremembered

There is no right or wrong answer in situations like these, so it's best to avoid such arguments at all costs. As Tim Lott said on The Guardian, "Everybody mythologizes the past in order to put themselves in the best light. So when it comes down to trying to work out what went wrong when you had a disagreement, it becomes very hard, as each party uses imagination to supplement memory — indeed, create memory. As therefore you can never quite agree on common facts, this is rich territory for conflict."

If you sign up for a relationship, then you sign up for all your SO's gross little habits. Does he clip his toenails, and leave the detritus behind for you to find? Does she leave bowls of cereal lying around in an oh-so-unappealing way? If so, keep in mind that everyone has annoying quirks and eccentricities. Go ahead and offer a few gentle reminders to clean up, but don't let it turn into a lifelong debate. You're both gross, and always will be, so learn to accept each other's dirty little shortcomings.

10. What Goes On In The Bedroom

This can be some pretty tricky territory, as feelings can get easily hurt. But still, differences abound in the bedroom, and it needs to be addressed. As Lott said, "... the differences can be summed up pretty simply. Either one partner wants more, or one partner wants less, or — in a worst-case scenario — both." Be sure to listen to each other (instead of arguing), and try to meet each other's needs. It may not be easy, but it can work.

Of course it's fine to acknowledge each other's old relationships. If it makes either one of you uncomfortable, however, it should be a topic best left to the past. If you find this is becoming a point of contention, talk with each other about what's appropriate to discuss, and what isn't. Then stick to that agreement.

Save the big arguments for the important stuff, and hash out your little tiffs. But don't let unending, circular arguments become your MO. Sit down with your partner and discuss ways to avoid 24/7 conflict, and leave the pointless arguments behind.