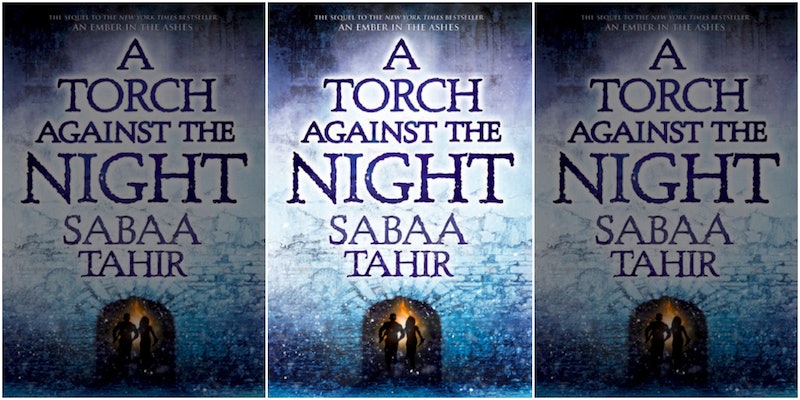 Last year, we named An Ember In The Ashes the best young adult novel of 2015. Sabaa Tahir's brilliant debut novel kept us up reading far past our bedtime (seriously, we were a mess), and we screamed with joy when we learned that a sequel would be released in August 2016. A Torch Against The Night, one of 2016's most highly anticipated novels, will bring us back to the brutal world of the Martial Empire where Laia and Elias, who narrated the first novel in alternating perspectives, fight for their freedom and their families.

Here's a refresher on the plot of the first book: in a desperate attempt to find her kidnapped brother, Laia, a member of the Scholar caste, joins the Resistance and agrees to spy upon Blackcliff Military Academy's Commandant, a heartless woman with a reputation for ruthlessness. Elias, the son of the Commandant, is a masked soldier-in-training (a Mask) and a member of the Martial caste. Their fates intertwine, and they form a tentative friendship and alliance. But life under the rule of the Martial Empire isn't easy, and Laia must fight to escape the torture of the Commandant while Elias battles against his fellow Masks in a series of grim, grueling trials that will determine who becomes the next Emperor. At the end of the novel, Laia and Elias narrowly escape Blackcliff, the Commandant, and the clutches of the Emperor's army.

Phew, that book was an emotional adventure...

Laia and Elias' addictive tale of survival, love, and courage kept us turning the pages of An Ember In The Ashes long, long into the night, but we also fell pretty hard for the secondary characters. In A Torch Against The Night, we'll finally learn about the inner-workings of another important character: the confounding Helene Aquilla — Elias' best friend, a fellow Mask, and the soldier chosen to become the Blood Shrike and second-in-command of the new Emperor, Marcus.

That's right: the new book will be told from three points of views, narrated by Laia, Elias, and Helene.

We'll give you a moment to compose yourself.

Helene is bound by duty to the Emperor but bound by love to Elias. At the end of the first novel, she was commanded to kill Elias. She refused. In the exclusive excerpt below, Helene is asked (once again) to do the unthinkable — track, torture, and kill Elias. Finally, we'll get to see what lies beneath Helene's cold, stoic facade. Will she kill the boy she loves? Or will she betray the Emperor again and find her own destiny?

Emperor Marcus has taken up residence in Villa Veturia.

“At the Commandant’s urging, no doubt,” my father says, as guards wearing Veturia colors open the villa’s gate to us. “She’ll want to keep him close.”

I wish he’d picked anywhere else. Memory assails me as we pass through the courtyard. Elias is everywhere, his presence so strong that I know if I just turn my head, he’ll be inches away, shoulders thrown back in careless grace, a quip on his lips.

Memory assails me as we pass through the courtyard. Elias is everywhere, his presence so strong that I know if I just turn my head, he’ll be inches away, shoulders thrown back in careless grace, a quip on his lips.

But of course he’s not here, and neither is his grandfather, Quin. In their places are dozens of Gens Veturia soldiers watching the walls and roofs. The pride and disdain that were the Veturia hallmark under Quin are gone. Instead, an undercurrent of sullen fear ripples through the courtyard. A whipping post is haphazardly erected in one corner. Fresh blood spatters the cobblestones around it.

I wonder where Quin is now. Somewhere safe, I hope. Before I helped him escape into the desert north of Serra, he gave me a warning. You watch your back, girl. You’re strong, and she’ll kill you for it. Not outright. Your family is too important for that. But she’ll find a way. I didn’t have to ask him whom he was talking about.

My father and I enter the villa. Here’s the foyer where Elias greeted me after our graduation. The marble staircase we raced down as children, the drawing room where Quin entertained, the butler’s pantry at its back, where Elias and I spied on him.

By the time Father and I are escorted to Quin’s library, I am scrambling for control over my thoughts. It’s bad enough that Marcus, as Emperor, can order me to do his bidding. I cannot also allow him to see me mourning Elias. He’ll use such weakness to his advantage—I know it.

“Blood Shrike.” Marcus looks up at my entry, my title somehow insulting on his lips. “Pater Aquillus. Welcome.”

I’m not sure what to expect when we enter. Marcus lounging among a harem of bruised and beaten women, perhaps.

Instead, he’s in full battle armor, his cape and weapons bloodied, as if he’s been in the midst of the fighting. Of course. He’s always loved the gore and adrenaline of battle.

Two Veturia soldiers stand at the window. The Commandant is at Marcus’s side, pointing to a map on the desk before them. As she leans forward, I catch a glimmer of silver beneath her uniform.

The bitch is wearing the shirt she stole from me.

“As I was saying, my lord,” the Commandant nods in greeting, before picking up the thread of the conversation. “Warden Sisellius of Kauf must be dealt with. He was cousin to the old Shrike and shared intelligence from Kauf’s prisoner interrogations with him. It was the reason the Shrike was able to keep such a tight rein on internal dissent.”

“I can’t look for your traitorous son, fight the rats’ revolution, bend the Illustrian Gens to my will, deal with border attacks, and take on one of the most powerful men in the Empire, Commandant.” Marcus has taken to his authority naturally. As if he’s been waiting for it. “Do you know how many secrets the Warden knows? He could raise an army with a few words. Until we have the rest of the Empire sorted, we leave the Warden be. You’re dismissed. Pater Aquillus.” Marcus glances at my father. “Go with the Commandant. She will handle the details of our . . . arrangement.”

Arrangement. The terms of my release. Father still has not told me what they were.

But I can’t ask now. Father follows the Commandant and the two Veturia soldiers out. The study door slams behind them. Marcus and I are alone.

He turns to regard me. I can’t meet his glance. Every time I stare into his yellow eyes, I see my nightmares.

He turns to regard me. I can’t meet his glance. Every time I stare into his yellow eyes, I see my nightmares. I expect him to revel in my weakness. To whisper in my ear about the dark things we both see, the way he’s been doing for weeks. I wait for his approach, for his attack. I know what he is. I know what he’s been threatening me with for months.

But he clenches his jaw and half lifts his hand, like he’s about to wave away a mosquito. Then he exerts control over himself, a vein popping at his temple.

“It appears, Aquilla, that you and I are stuck with each other, as Emperor and Shrike.” He spits the words at me. “Until one of us is dead, anyway.”

I am surprised at the bitterness in his voice. His cat eyes are fixed in the distance. Without Zak beside him, he doesn’t seem fully present—half a person instead of a whole. He was . . . younger around Zak. Still cruel, still horrible, but relaxed. Now he seems older and harder and, perhaps most terrifyingly, wiser.

“Then why didn’t you just kill me in the prison?” I say.

“Because I enjoyed watching your father beg.” Marcus grins, a flash of his old self. The smile fades. “And because the Augurs seem to have a soft spot for you. Cain paid me a visit. Insisted that killing you would lead to my own doom.” The Snake shrugs. “To be honest, I’m tempted to slit your throat just to see what happens. Perhaps I still will. But for now, I have a mission for you.”

Control, Aquilla. “I’m yours to command, my lord.”

“You know him. You know how he thinks. You will hunt him down and bring him back in chains. Then you will torture him and execute him. Publicly.”

“The revolution is quelled,” Marcus says. “Your assistance is unnecessary.”

I knew this would happen. I knew he’d send me after Elias. I knew it because I dreamt it. But I didn’t think it would be so soon.

I knew this would happen. I knew he’d send me after Elias. I knew it because I dreamt it. But I didn’t think it would be so soon.

“I’ve just become leader of the Black Guard,” I say. “I need to get to know my men. My duties.”

“But first you must be an example to them. What better example than catching the Empire’s greatest traitor? Don’t worry about the rest of the Black Guard. They’ll take orders from me while you’re on this mission.”

“Why not send the Commandant?” I try to suppress the desperation in my voice. The more it shows, the more he’ll revel in it.

“Because I need someone ruthless to crush the revolution,” Marcus says.

“You mean you need an ally at your side.”

The Snake stops his pacing.

“You swore to be my Shrike, the sword that executes my will. Now is your chance to prove your loyalty. The vultures circle, Aquilla. Don’t make the mistake of thinking I’m too stupid to see it. Veturius’s escape is my first failure as Emperor, and the Illustrians already use it against me. I need him dead.” He meets my eyes and leans forward, knuckles bloodless as he clenches the desk. “And I want you to be the one who kills him. I want you to watch the light die in his eyes. I want him to know it’s the person he cares for most in the world who shoved a blade through his heart. I want it to haunt you for all of your days.”

There is more than just hatred in Marcus’s eyes. For a fleeting, indiscernible moment, there is guilt.

There is more than just hatred in Marcus’s eyes. For a fleeting, indiscernible moment, there is guilt.

The name of Marcus’s twin hovers between us, a ghost that will come to life if we only say the word. We both know what happened on the battlefield of the Third Trial. Everyone does. Zacharias Farrar was killed—stabbed in the heart by the man standing before me.

“Very well, Your Majesty.” My voice comes out strong, smooth. My training kicks in. The surprise on Marcus’s face makes it gratifying.

“You’ll begin immediately. I’ll be receiving daily reports—the Commandant has chosen a Black Guard to keep us appraised of your progress.”

Naturally. I turn to go, my stomach churning as I reach for the door handle.

“One more thing,” Marcus says, forcing me to turn, my teeth gritted, “don’t even think about telling me that you’re unable to catch Veturius. He’s sly enough to escape the bounty hunters quite easily. But you and I both know that he would never be able to escape you.” Marcus cocks his head, calm, collected, and full of hatred.