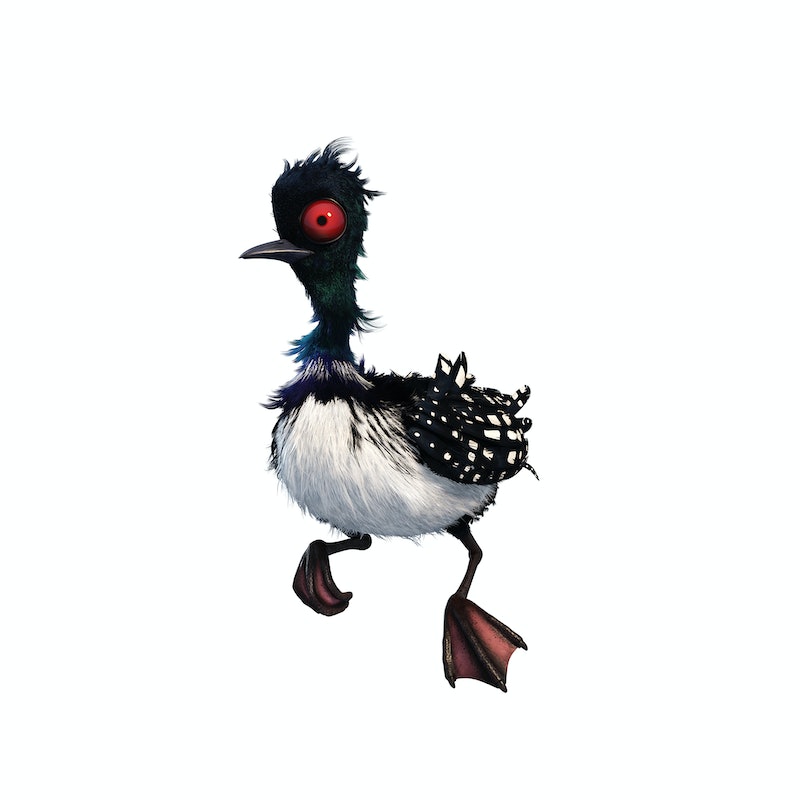 Pixar has a knack for capturing the innate goofiness of birds. In Up, an awkward, rainbow female bird named Kevin nearly stole the entire movie. In Finding Nemo, Nigel the pelican assists Marlin and Dory in their Nemo rescue operation, while a group of possessive seagulls monitor the pier for anything resembling food. ("Mine?") And now, 13 years after Finding Nemo was released, most of its main characters are back in the sequel Finding Dory — but the movie also adds a menagerie of new memorable characters to the story. Among them is the latest feathered Pixar character to win hearts with its gawkiness, Becky — but what kind of bird is Becky, exactly?

Becky is a loon, and she's just one of the many animated animals making their debut in Finding Dory, the majority of whom are voiced by members of the movie's A-list cast. Modern Family star Ed O'Neill plays Hank the octopus; his sitcom co-star Ty Burrell is Bailey the beluga whale. A whale shark named Destiny is played by Kaitlin Olson from It's Always In Philadelphia, while internet boyfriend and Beasts Of No Nation actor Idris Elba voices a sea lion named Fluke. His The Wire castmate Dominic West is Rudder the Sea Lion, and that list really only scratches the service of the voice talent packed into the movie. But Becky wasn't born in the sound booth with a TV or movie star. Becky is an entirely non-verbal bird. Pixar has done wonders with that kind of character before, and the studio knows its way around visual comedy and storytelling. There's barely any dialogue in the entire run time of Wall-E, if you recall.

In this TV promo spot for Finding Dory, Becky doesn't look like the most helpful ally to the movie's fishy heroes. But this brief gag alone is about enough to endear the little loon to me for life. I know I've had days like this before.

"Loons are the seagulls of this movie," Finding Dory director Andrew Stanton told USA Today. That's no small claim. The seagulls in Finding Nemo left some giant, webbed shoes to fill. With their bobbing heads and inquisitive, squeaky voices, the seagulls became instant fan favorites. Anyone who's ever been close to water knows that the Pixar animators nailed their personalities and quality of movement.

So why loons? I looked up the birds on the Audubon Guide To North American Birds to learn more. According to Audubon, Pacific Loons (since Finding Dory takes place off the coast of California, that's likely what kind of loon Becky is) spend summers up north and migrate south for the winter. They're foragers who dive into the sea to catch their prey and can swim completely underwater. The self-sufficient birds leave their nests early and have been known to mate for life. (Aw.) Aubudon describes the loons vocalizations as "a harsh kok-kok-kok-kok" and "wailing notes" when they're in their breeding area. Pixar animators are known for their attention to detail, so I'd expect to hear some similar sounds from Becky.

Finding Dory takes Pixar fans back underwater, but non-aquatic creatures like Becky are still part of the fun.