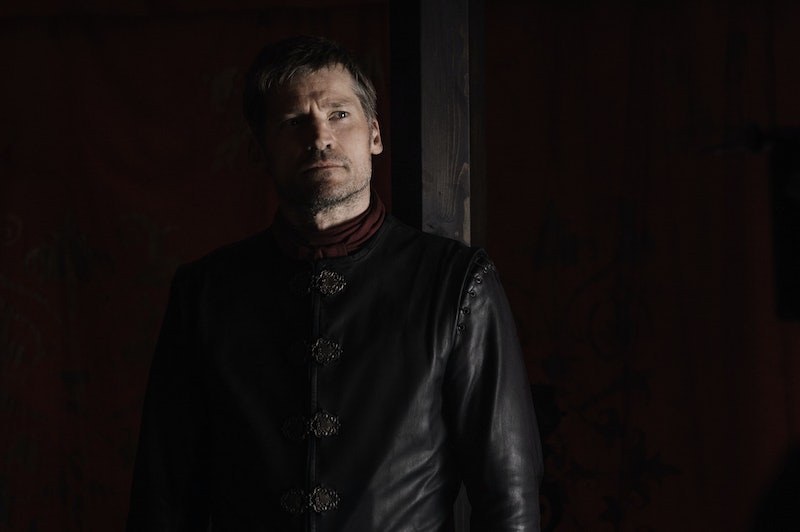 When Lancel Lannister asked Cersei to choose between going with them quietly or risk an outbreak of violence during last Sunday's Game of Thrones episode, she delivered the now-iconic line: "I choose violence." That sentiment may end up symbolizing a lot more than we think throughout the final two episodes, especially if the theory that Cersei's rumor is about wildfire turns out to be true. Many viewers think that, like Bran's vision foretold, Cersei will end up unleashing the Mad King's wildfire throughout various parts of King's Landing in an attempt to bring the High Sparrow down. But if that really is the case, I'll be curious to see what Jaime makes of this plan. Will he support his sister like he usually does or will this dangerous plan force Jaime to kill Cersei on Game of Thrones , in order to save thousands of innocent lives?

I know the idea sounds crazy. Jaime has proven time and time again how much he loves Cersei, so the thought of him killing her doesn't make any sense. I mean, we're talking about the same guy who pushed Bran off a tower in the name of his love for Cersei, so why would he betray her in such a monumental way? Because she's never posed as great of a threat and never been more desperate to reclaim her power, that's why.

With two of her children already dead, Cersei is more determined than ever to make sure Maggy the Frog's prophecy (that claims all three of her children will wear golden shrouds) doesn't come true. That means she'll do pretty much anything to get Tommen out from under the High Sparrow's grasp... even if it means bringing the entire city down with him. Cersei has claimed many times that she'd be willing to burn cities to the ground for her children. Perhaps those words were more literal than we ever realized, and if she's now somehow found out about the secret locations of wildfire throughout the city, she finally has the means to make it happen.

So how does Jaime fit into all of this? If you recall, the prophecy also stated that "When your tears have drowned you, the valonqar shall wrap his hands about your pale white throat and choke the life from you." The word "valonqar" is actually the High Valyrian term for "little brother." Sure, that could mean Tyrion, especially if "little" is supposed to indicate his actual size. But what if it actually meant Jaime? For all we know, Cersei was born moments before her twin brother, which would technically make him younger — aka her little brother.

Jaime loves Cersei, yes, but he's also changed from the man he was back in Season 1, at least in some respects. He could do what's best for the good of the people, even if it meant betraying his one true love. When he slayed the Mad King, it was for self-serving reasons. This could be his opportunity to repeat history, except this time around he'd have a more heroic motivation. And considering Jaime is one of the few people who is able to get super close to Cersei without The Mountain's watchful eye upon them, so he really could be given an ideal opportunity to take her down. She'd never see it coming.