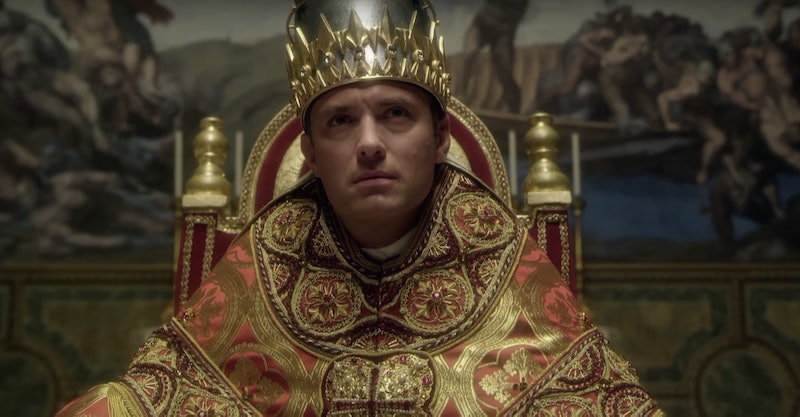 You can divide Jude Law's considerable body of work into two clear halves: easy-on-the-eye leads or co-leads (as per Alfie, The Talented Mr. Ripley, The Holiday) or character actor-parts (as per Road To Perdition, I Heart Huckabees, Sherlock Holmes). In The Young Pope , though, Jude Law carves out a third and distinctly new role for himself: he's on the small screen, for a start. But there's more to it than that.

Law's role isn't far out enough to be charactor-actor fare — he's a Pope, and a young one at that, and one who even indulges in a cigarette or two, at least according to the teaser trailer. But there's no tortured soul stuff here. He's playing the role fairly straight. This said, it's by no means in sexy-male-lead territory, which I'd imagine Jude Law is probably relieved by. He's always seemed at his strongest when not playing off his looks and at the age of 43, you probably hope you've got all that teen-idol stuff behind you. Check out the trailer and you'll see what I mean — it's a subtle, nuanced performance that avoids caricature and where Law comes across as charismatic, but not necessarily proto-sexy TV male. He's no Don Draper...

...but he's definitely working the Jon Hamm-on-Mad-Men-baritone. So despite Jude Law's brave new acting territory, maybe he's not quite ready to hang up his heartthrob status yet. Those soft filters and swimming pool shots are definitely pushing this thing into Thorn Birds status for some, with Vulture describing Law's role as that of "a hot pope called Lenny." Hmm!

With or without a crush on Law's character, the HBO series sounds like one to tune in for with award-winning director Paolo Sorrentino (The Great Beauty, Youth) helming the production and with Hollywood royalty Diane Keaton starring as a nun. Get ready to give thanks for some high-quality new TV coming to a small screen near you soon.