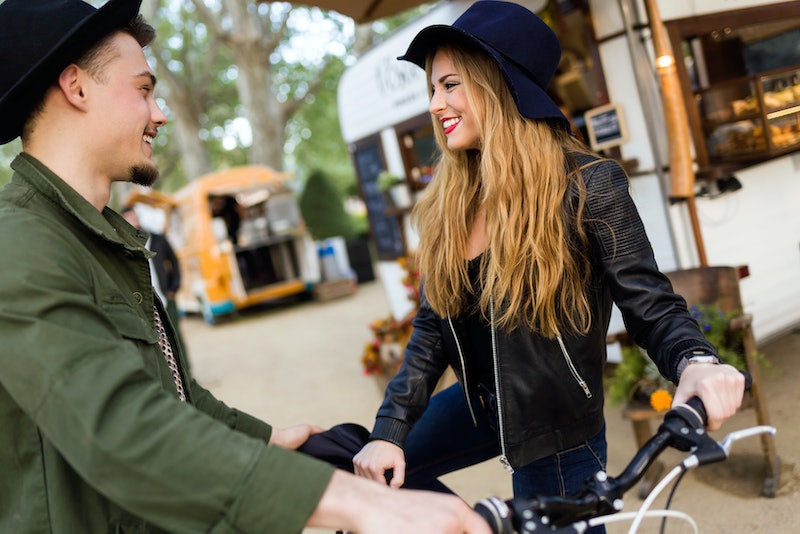 Usually I’m a diehard romantic but I have to admit, I don’t believe in love at first sight. I believe in lust at first sight, for sure (who hasn’t lusted over a random hottie on the bus at some point in their life?) but love? Nah. Love, to me, is something that takes trust and sex and a whole lot of hours to develop. Granted, I tend to fall in love quicker than most — I dropped the “L word” first in all three of my major relationships — but I just don’t think you can fall in love with someone immediately upon seeing them.

But apparently I’m in the minority, at least according to a recent survey of 2,700 people by the dating site EliteSingles. While their sample is probably skewed — they did talk to people who, because they are actively online dating, may have a bit more invested in romantic hope — the fact that they found that 66 percent of their survey participants believe in love at first sight suggests that a lot of other Americans do too. Is everyone watching more romantic comedies than I am or am I just secretly a total curmudgeon?

Anyway, the rest of the numbers from the EliteSingles survey are also really interesting. Here are five things they discovered about how Americans feel about love at first sight.

1. More Men Than Women Believe In It

EliteSingles found that 72 percent of men and 61 percent of women believe in love at first site. (No word on non-binary folks.) I actually don’t find these results to be surprising at all. It has always seemed to me like men are more prone to fall in love at first sight than women are. I have no proof of this; it’s just what I’ve observed in my own life.

Apparently women between the ages of 18 and 29 were the most likely to believe in love at first sight, with 90 percent of that age group saying they were into it. In comparison, 81 percent of men in that same age group also believed.

3. As Women Get Older, Our Faith Drops

However, romance definitely dies harder for women because by the time we reach the 30 to 30 age group, that number drops significantly, to 56 percent. Le sigh. I feel you, ladies.

4. New York Dudes Are Way More Into It Than The Ladies

New York is often decried as a terrible city for single women, but here’s a little hope: 73 percent of New York men believe in love at first sight, compared with 59 percent of women. Maybe the women are just exhausted from dating in New York?

5. It’s More Common When You’ve Got Other Stuff Going On

According to EliteSingles psychologist Salama Marine, love at first sight is more common when you have a bunch of other things going on, like a move to a new city or an exciting new job. It’s that classic, “You’ll find it when you’re not looking,” situation that I swear was invented to annoy single people. Kind of like the whole idea of love at first sight…