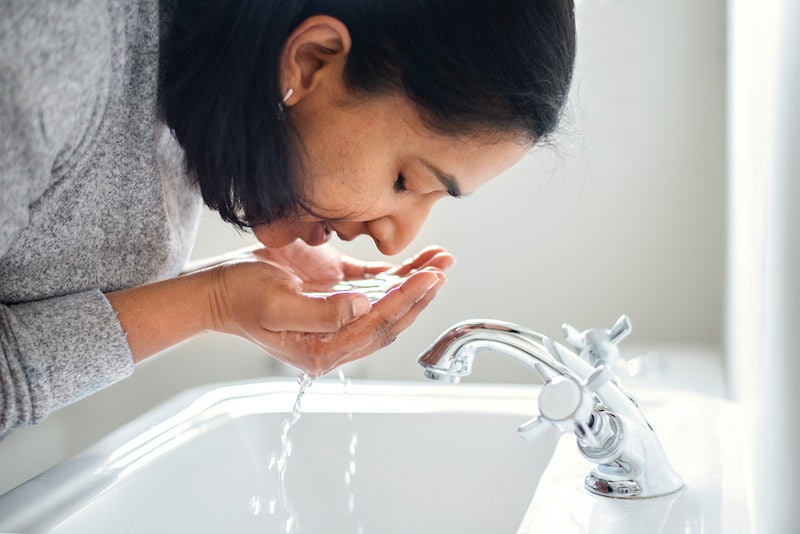 Never underestimate the power of the pimple. Talents include: suddenly appearing before important dates and events, developing on every nook and cranny (jaw line, ears, T-zone, you name it, it's there), and most notably, tempting mankind to pick, prod, and provoke in any way possible. Granted, breakouts are hard to avoid — it just comes with the territory after all.

Sorry to say, but if The Big One sprouts on your forehead overnight, it may already be a lost cause. Your next best bet is to take precautions when dealing with said enemy — knowledge is the ultimate weapon of pimple destruction here. Heed the internet advice and your skin will thank you — at least mine did. Before, I had no idea that changing moisturizers and wearing daily SPF could combat against breakouts. Thank-you, digital age.

If you're constantly being plagued by those nasty flare-ups, perhaps it is time you re-evaluate how you treat them. Yes, pimples are a pain to maintain, but remember what lies at the end of the road — the chance of, once again, crystal clear skin. Part of the problem may be in how you deal with breakouts once they have struck. Bad habits breed even more blemishes.

Ensure that you never commit any of these eightpimple mistakes and you'll be well on your way to recovery. May radiant, zit-free skin be in the cards for your future.

Don't worry, this one caught me off-guard too — who knew there was such a thing as too much cleansing? As it turns out, major rinsing can leave skin dry and prone to oil production, Bustle's Miki Hayes previously reported. When that oil builds up, it leaves a bevy of issues in its wake — clogged pores, shiny foreheads, and of course, the inevitable breakout. Stick to washing your face twice a day to give your face a breather without sacrificing cleanliness.

Trust me, there's nothing more I love than a good scrub to banish all that dead skin. However, you must tread lightly — over-exfoliate and you might leave your skin irritated, according to Huffington Post. No one likes blotchy red patches, and this will only prolong pimple life.

Ah, the magical phrase of "acne fighting." Go ahead and splurge on a pimple preventative cream or two, but don't go overboard, according to WebMD. Your skin is sensitive and though you may think the more, the better, it may prove to be the opposite. As Hayes points out, zit-fighting products are already packed full of chemicals that are harsh on the face, so remember: a little goes a long way.

4. Don't Use The Wrong Products For Your Skin Type

I cannot repeat this enough: know your skin type, know your products. You know what works best on your complexion, and whether you're team combination skin or dry, it is vital that you use makeup and beauty products that are suitable for not just you, but your lifestyle. Now, how do blemishes play into here? Well, for one, if you don't do your research, you may be doing your skin more harm than effect. The wrong foundation type or moisturizer may leave you with the ill-fated breakout.

5. Don't Fall For All The Myths

Whether it actually is your beloved iPhone causing breakouts to the toothpaste on pimple trick, there are a handful of myths claiming to debunk pimples once and for all. But myths are myths for a reason — not all are completely true, despite what those Google searches tell you. Before you believe another story of pimple lore, do your research and spend some time figuring out what is actually causing your breakouts.

Confession: I'm still that college student who avoids going to the doctor when Mom isn't around, so do you really think I'll make it to the dermatologist on my own? With that being said, I should preach what I write — if your breakouts start causing serious issues, book an appointment ASAP and don't try DIY a remedy on your own. Inflamed pimples that go untreated may turn into cystic acne, so chin up and head to the derm.

7. Don't Sleep In Your Makeup

We've all been there — long days, no energy, and a burning desire to just crawl into pajamas and call it a night. And while cloud nine may be especially tempting, always ensure that you properly remove makeup before catching a few zzz's. Sleeping in your falsies and smokey eye after a night out seems like the right idea at first, but at that rate, you're just inviting flare-ups to happen. Overnight, makeup can accumulate and clog your pores, thus rendering it prime pimple territory, according to StyleCaster.

There is torture, and then there is that zit begging to be popped. Excercise control — while deflating that pimple is incredibly tempting, you are putting your skin at risk by not going to a professional. According to WebMD, "Popping and picking pimples prolongs healing time and raises the risk of scarring. Infected material can get pushed further into the skin, leading to more swelling and redness." If you are really itching to pop, go to a dermatologist or stick to a spot treatment until the pimple naturally snaps on its own.