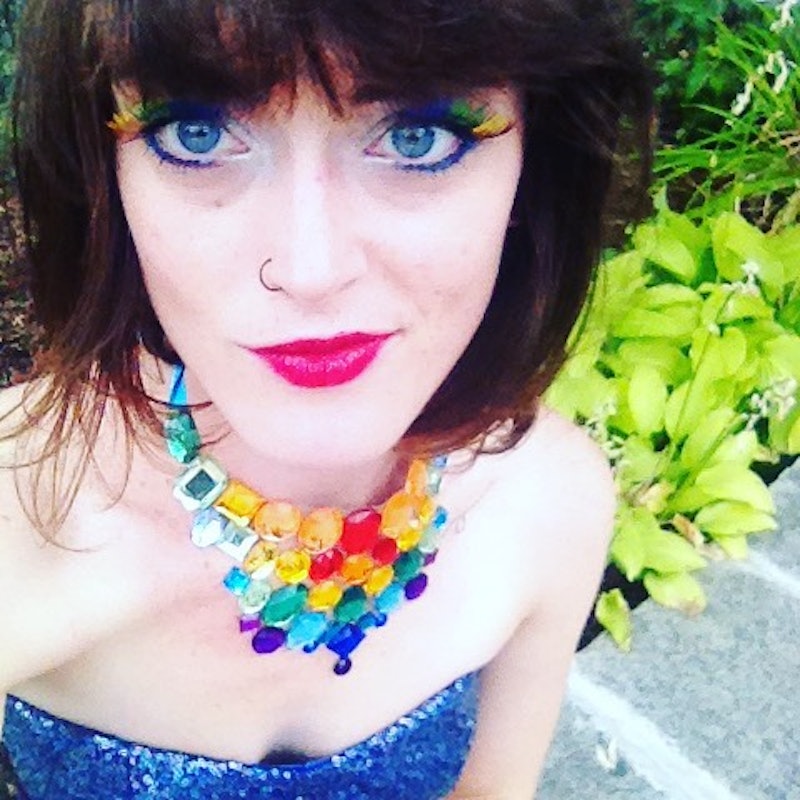 I remember my first gay bar, and I remember all of the ones that came after. Sky. Unity. Le Drugstore. The Mix. Neighbors. Meow Mix. That dark basement club in Berlin; those pop-up pride events in Budapest. But that first one, that first night, surrounded by other queer people, stepping into a whole new world where I actually belonged...it was a gift to 17-year-old me. The moment I stepped into that bar in Montreal, it was a revelation.

The me that was outed without my consent in my freshman year of high school. The me that had never had a girlfriend, because I didn’t really know a lot of other queer people. The me that had family members that loved using “dyke” and “faggot” as insults. The me that had a classmate mock and throw slurs at me for participating in the Day of Silence. The me that came from a town where we were so accepting, we obviously didn’t need a gay bar anymore, right?

I'm living back in my hometown, over 10 years later, and we still don't have one. Straight folk I talk to can't understand why we would want one, but my queer family here resents the lack of gay bar. We go to Montreal, or NYC, or Boston to get our fix.

Queer spaces are all different, but they all have something important in common: they’re sanctuaries for people like me.

After the Orlando Pulse shootings, I struggled to explain the importance of queer spaces to my straight friends. Instead of trying to tell, I'm going to do my best to show, through snapshots of my experiences in gay bars over the years.

It was my first year of university at McGill, and the frosh program for queers and leftists took us to the Village, where I found myself. I remember the acrid smell of old sweat and smoke as fellow queers pressed their bodies against one another in the darkness; the feeling of amazement and belonging; the feeling of being home; the feeling of finding my people. For once, I didn't feel out of place. I went to my first Homo-Hop later that year, put on by the student queer organization, and for the first time I danced with women and queer folk like I had with boys at grade-school dances.

I spent my time in gay bars and at lesbian nights. I went to one with some friends one night, and a straight man zeroed in on me, in all of my straight-passing, femme glory. He offered to buy me a drink; I asked him if he knew where he was. He didn't, and I informed him he may not have the best of luck at a lesbian dance night....and he scoffed, becoming more insistent. I left shortly after; the sanctity of the space was violated for the night. Later that month I went to a lesbian haircuts & bike shop, and got the queerest haircut I could.

18 Years Old, Montreal: A Place To Fall In Love

My sophomore year of university, I was the board of the student queer organization, fighting against allowing discriminatory blood donation policies in our student union building. I helped run the Homo Hop, despite my preference for politics over partying.

She saw me from across the room, and decided to bump into me. We danced, and she asked to kiss me. It was heaven. Pressed against her in the darkness, I was me. I was truly me.

20 Years Old, Berlin: A Place To Be Ourselves

I went to Berlin to visit my beautiful, brilliant girlfriend from McGill, my first lady love. I spent a week with her in one of the most neo-Nazi-heavy parts of Berlin. Obviously drunk on each other (and German beer), we were unable to stop touching each other when we walked home from the lesbian club we went to that night, forgetting that the safety of the dark basement bar didn't extend to her neighborhood.

It was the end of my fourth year of university, before my victory lap. I've spent the last few years with everyone assuming I was straight, because I was married to a man; queer spaces were my only refuge from this erasure of my identity, the only place I didn't feel like I'm somehow being dishonest. My husband and I split up. I went to the gay bar down the street, where I usually went, and got drunk with my friends, trying to heal. It was karaoke night; I managed to avoid singing, but I got so drunk that I started vomiting in the bar. I blacked out and went outside, where a drag queen stood over me, stroking my hair as I continued to vomit, and I apologized and thanked her. She said, "oh honey, it’s OK, this is what we do for each other." She made sure no one bothered me while my friends settled up at the bar. I woke up the next morning, thankful for her kindness and my safety.

I marched at Pride with Amnesty International — my program wouldn't let me go, otherwise, as they (rightfully) feared for my safety. The march was peaceful, mostly, but there were neither any protesters or onlookers because the police put barriers up a block or two out. At the end though, counter-protesters gathered at Heroes Square, and shouted hatefully. For once I'm glad I don't speak Hungarian. That night was the Rainbow Party. I met up with the woman I'd been seeing. We enjoyed the safety of the party, dancing til late, able to be totally unselfconscious; a beautiful night of respite from our normal paranoia whenever we dared to kiss in public.

22 years old, Seattle: A Place To Be Visible

My girlfriend, who I lived with half the week, and I went to a gay club on Capitol Hill. We danced, and for once, I didn't feel like I had to take a backseat to her other partner, her husband, the father of her child. Here, we could just be us. No one assumed I'm their plaything, or that my relationship with her is anything other than genuine. I breathed easy.

27 Years Old. Burlington, VT: A Place To Forget And Just Be

My girlfriend of six years and I go to an all-ages, substance-free femme dance party. We're both at the age where we spend more time thinking about paying bills and when is our next break from the constant mundanity of work than what parties to hit up that weekend, so it's a much-needed respite. We laugh joyously at versions of our younger selves, awkwardly hiding in corners, unsure of what to do with themselves, too aware of how they might look. We want to tell them it'll get easier, just dance, just dance and be here with your people. We take our own advice: we dance, we kiss, we laugh. We marvel at how much we wish we had spaces like these when we were 15, 16, 17. And for one glorious night, everything else falls away, and we're just us.

There was a point, shortly after university, when I thought I didn't need the queer community. I thought that organizing or making friends on the basis of who we like to f*ck was trite. I realize now that I was wrong. I may not want the queer community to be my entire universe, but I need it to be a part of my universe. And when I go to Reykjavik next month with my girlfriend, we'll be going to a queer bar, and this time, it will be a place to mourn, and to remember. Queer spaces are all different, but they all have something important in common: they’re sanctuaries for people like me. Those dark basement bars and four-floor dance clubs, thick air and sweaty bodies and all, they are my church.