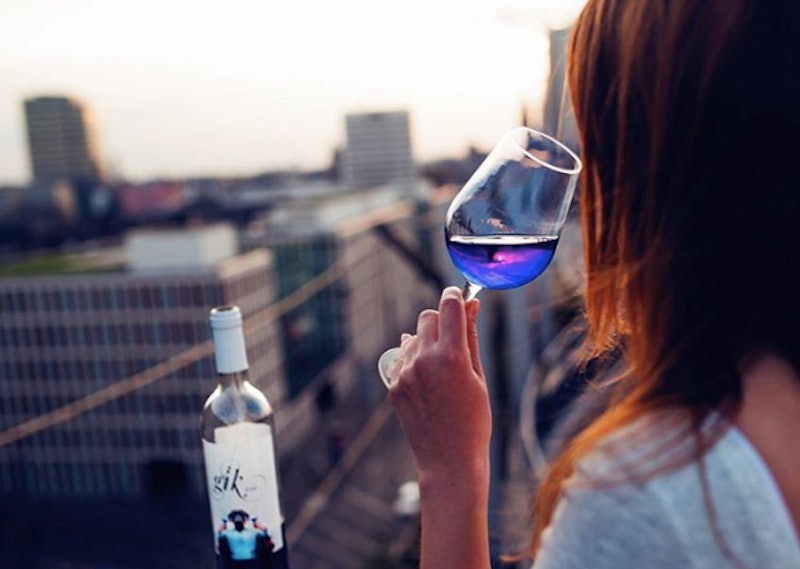 Are you blue (da ba dee da ba daaaa)? Well, thanks to Eater's projected upcoming blue wine trend, you certainly will be soon. Joining its white and red brethren (wow, wine tastings just got patriotic AF), blue wine is of the sweet, chilled variety, and hails from a company in Spain called Gik. The company, headed by six young Spanish entrepreneurs, specifically is targeting Millennials for this venture — and while as a Millennial I bristle at the mere idea of anybody targeting something at me, TARGET THIS AT ME, PLEASE. You guys, the recommended pairings are sushi and nachos with guac. Should there be a holier combo than that, I do not want to know, for I am not prepared for the burden of its glory.

So you're undoubtedly wondering by now — why the heck is this wine blue? Turns out it's made from a blend of red and white grapes sourced from wineries around Madrid, and its blue-ness comes specifically from anthocyanin, a pigment in grape skin, and from indigo, a plant dye. I imagine it also comes from magic, because Look At This. Look how aggressively Instagrammable this is. The urge to get a bottle of this and Valencia filter the bejeezus out of it is almost primal.

Co-founder Aritz López told Eater that the inspiration for it came from the book Blue Ocean Strategy, a book by business strategist. "He tells about red oceans in his book, representing business markets saturated by specialists (sharks) who fight for the same variables and for a reduced number of clients (fish), and end up in water turned red," Lopez told Eater. "And how it’s necessary to revert this, by innovating and creating new variables, back to blue. This seemed poetic for us to turn a traditionally red beverage into a blue one."

The wine, which had a soft launch last year in Spain, now has expanded out to France, the United Kingdom, the Netherlands, and Germany — but never fear, fellow blue wine enthusiasts who are stateside. Gik has plans to expand out to the U.S. soon, although they are not exactly sure when. But I will know. Because my blue sonar will go off, cuz everything is blue for me, and myself, and everybody around, 'cuz I ain't got nobody to listen to (listen to, listen to).

Da ba dee da ba daaa, everyone. You deserve it.