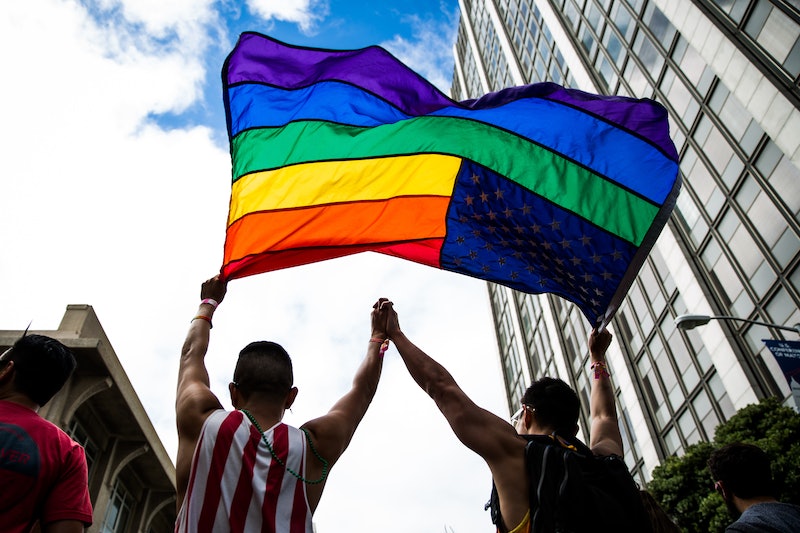 National Pride Month is in full swing, which means it's time to fly high the rainbow flag and show your love and support for the LGBTQIA+ community. While it may be hard for you to put into words exactly how you feel, there are plenty of activists, writers, politicians, artists, and more whose LGBTQ quotes for Pride are perfect.

LGBTQ people have been sharing their pride and spreading their love since the Stonewall riots of the 1960s, and even long before then. In 1978, Harvey Milk's "The Hope Speech" implored people to embrace diversity, be open minded about sexuality, and be proud of who they were. In 2013, Lana Wachowski shared her own inspiring words with her Visibility Award acceptance speech. "I am here because when I was young, I wanted very badly to be a writer," she explained. "I wanted to be a filmmaker, but I couldn’t find anyone like me in the world and it felt like my dreams were foreclosed simply because my gender was less typical than others. If I can be that person for someone else, then the sacrifice of my private civic life may have value." And every year, as more and more people share their love and LGBTQ pride, the world slowly starts to become a more accepting, loving, and tolerant place.

Finish off Pride month strong by celebrating these emotional, comforting, wise, and, most importantly, proud LGBTQ quotes from people who know exactly how to express themselves.

1. "I have a duty to speak the truth as I see it and share not just my triumphs, not just the things that felt good, but the pain, the intense, often unmitigated pain. It is important to share how I know survival is survival and not just a walk through the rain."

2. "Let yourself go. Pull out from the depths those thoughts that you do not understand, and spread them out in the sunlight and know the meaning of them."

3. "The important thing is not the object of love, but the emotion itself."

4. "All of us who are openly gay are living and writing the history of our movement. We are no more — and no less — heroic than the suffragists and abolitionists of the 19th century; and the labor organizers, Freedom Riders, Stonewall demonstrators, and environmentalists of the 20th century. We are ordinary people, living our lives, and trying as civil-rights activist Dorothy Cotton said, to 'fix what ain't right' in our society."

6. "Being gay is a natural normal beautiful variation on being human. Period. End of subject. Therefore, any argument which says differently is an immoral supremacist one. Call it out as such...Be outraged, offended, angry and intolerant of any discussion or any one who describes you as unequal, undeserving, or unnatural for being just as you are."

7. "The only queer people are those who don't love anybody."

8. "I've been embraced by a new community. That's what happens when you're finally honest about who you are; you find others like you."

9. "The beauty of standing up for your rights is others see you standing and stand up as well."

10. "I want to do the right thing and not hide anymore. I want to march for tolerance, acceptance and understanding. I want to take a stand and say, 'Me, too.'"

11. "I am happy to dispel any rumors or misconceptions and am quite proud to say that I am a very content gay man living my life to the fullest and feel most fortunate to be working with wonderful people in the business I love."

12. "I learned compassion from being discriminated against. Everything bad that's ever happened to me has taught me compassion."

14. "The richness of our communities, our cities, and our nation lies in recognizing and celebrating our diversity. That diversity is not only in our various ethnicity and cultures, but also in the diversity of our sexual orientations. We all contribute, each in our own way, to the strength, vitality, and the well-being of our society."

15. "My sexuality is my own sexuality. It doesn't belong to anybody. Not to my government, not to my brother, my sister, my family. No."

16. "Remember, bisexuality doesn’t mean halfway between gay or straight. It is its own identity."

17. "I'm kissing my wife on the cover because the mother of a gay kid might see it and finally come around to letting her son or daughter back in the house...because it's time for every American to have their civil rights."

18. "But I always have and still do consider myself queer. To me, being queer isn't who you're sleeping with; it's just an idea that sexuality isn't gender-based, that it's love-based."

19. "The fact is, I’m gay, always have been, always will be, and I couldn’t be any more happy, comfortable with myself, and proud."