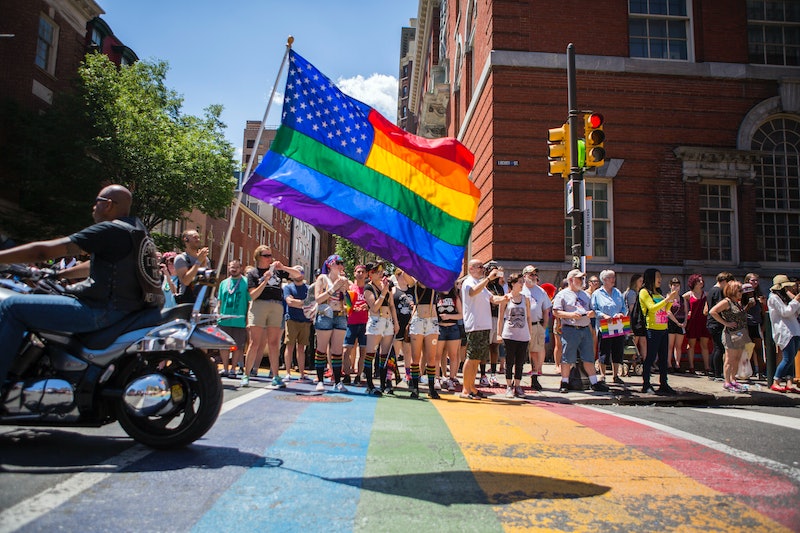 It's dark moments in history like the Orlando shooting, moments following tragedies caused by hate, that the country needs to stand strong, united, and inspired to make a change. But if you find yourself, like millions of other people around the world, feeling hopeless and disheartened, let these inspiring LGBTQ Pride quotes bring a little love and hope into your life.

It's easy to be overwhelmed with sadness, confusion, and anger after the attack on Pulse's gay nightclub in Orlando. A tragic event that killed 49 people and injured another 53, the mass shooting is the deadliest attack in recent history in the United States, and it has left the entire nation heartbroken and outraged. But madness breeds madness, and hate breeds hate, so instead of focusing on the negative, we should take a moment to show our solidarity and our pride for the community most impacted by the events.

June is Pride month, which means that we should be spending the month honoring, celebrating, and supporting the LGBTQ community. An annual event that was born out of another attack on the gay community, the Stonewall riots of 1968, this year's Pride month seems especially important in the face of recent events. If there was ever a time to proudly fly your rainbow flag, this is it.

From the mouths of authors, politicians, activists, and artists, here are 16 inspiring LGBTQ Pride quotes that will lift your spirit and fill your heart with hope and love.

1. "Openness may not completely disarm prejudice, but it’s a good place to start."

2. "If a bullet should enter my brain, let that bullet destroy every closet door."

3. "What is straight? A line can be straight, or a street, but the human heart, oh, no, it's curved like a road through mountains.”

4. "The pressures on gay teens can be overwhelming — to keep secrets, tell lies, deny who you are, and try to be who you're not. Remember: you are special and worth being cared about, loved, and accepted just as you are. Never, ever let anyone convince you otherwise."

6. "Every gay and lesbian person who has been lucky enough to survive the turmoil of growing up is a survivor. Survivors always have an obligation to those who will face the same challenges."

7. "Never be bullied into silence. Never allow yourself to be made a victim. Accept no one's definition of your life; define yourself."

8. "I am a strong, black, lesbian woman. Every single time I say it, I feel so much better."

9. "Love goes very far beyond the physical person of the beloved. It finds its deepest meaning in his spiritual being, his inner self."

10. "In itself, homosexuality is as limiting as heterosexuality: the ideal should be to be capable of loving a woman or a man; either, a human being, without feeling fear, restraint, or obligation."

11. "I’ve been scared and battered.My hopes the wind done scattered.Snow has friz me, Sun has baked me,Looks like between ’em they doneTried to make meStop laughin’, stop lovin’, stop livin’–But I don’t care! I’m still here!"

12. "When all Americans are treated as equal, no matter who they are or whom they love, we are all more free."

13. "The only way I’m trying to influence people is to be more kind and compassionate with one another. That is the message that I’m sending out. I don't have an agenda. I'm not here to brainwash anyone. I want you to live your lives being exactly who you are. Be true to yourself. The most important thing is to be true to yourself."

14. "There will not be a magic day when we wake up and it’s now OK to express ourselves publicly. We make that day by doing things publicly until it’s simply the way things are.”

16. "I say that homosexuality is not just a form of sex, it’s a form of love, and it deserves our respect for that reason."