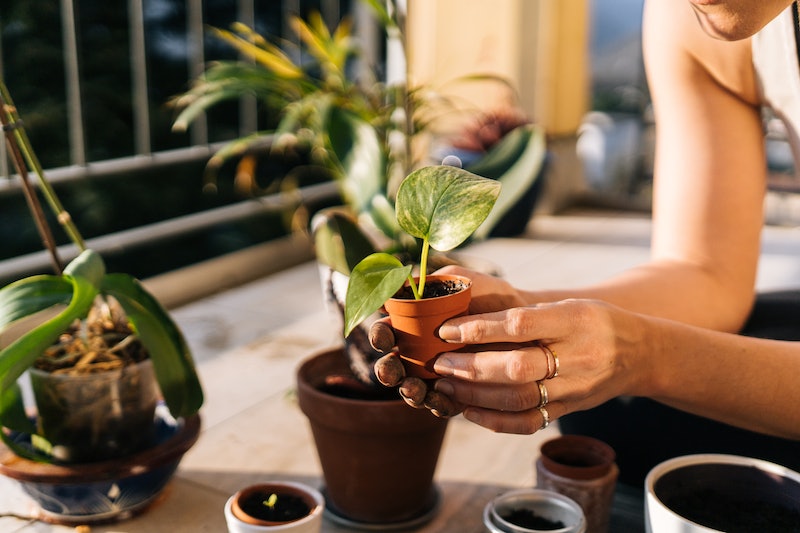 If your period is late this month, it may either be a cause for celebration or cause for concern — but before jumping to conclusions, it's important to take a breath. Many typical symptoms associated with pregnancy may actually be related to something completely different. Diet, exercise, and stress levels can affect your body more than you realize. There is no guaranteed pregnancy symptom other than a positive blood test at your doctor — even morning sickness has many other causes — so making assumptions too quickly may lead to some serious disappointment. Having pregnancy symptoms when you're not pregnant is a lot more common than you'd think.

The only foolproof way to know whether or not you are expecting is to take a pregnancy test and see your doctor. The reproductive cycle influences our bodies in many all-too-clear ways (cramps — ugh; emotions — double ugh), and the symptoms of pregnancy and PMS can be eerily similar if you're not pregnant. Trying to decipher exactly what symptoms mean can be super confusing, so it is helpful to be aware of all the possibilities before stressing one way or the other. In other words, check yo' self before you diagnose yourself.

Here are some signs of pregnancy that can have totally different causes behind them.

While this is one of the most common and well-known signs of pregnancy, a person can skip their period for a number of reasons.

"Lack of periods can mean pregnancy, but can also mean issues with the thyroid gland or other hormone imbalance in the body," Dr. Jamie Lipeles D.O., an OB-GYN, tells Bustle. He says that hormones can be influenced by stress, medications, and various kinds of birth control, as well as medical conditions.

Stress is more powerful than you think, and can be extremely disruptive to your body. It can affect the hypothalamus, which works with other systems to control hormone levels. If you are studying for some intense finals, you may expect Aunt Flow to be a little late with her monthly visit.

Medical disorders can also cause periods to disappear. "One of the most common causes of lack of period is a condition called polycystic ovarian syndrome (PCOS)," Dr. Lipeles says. "This hyper-androgenetic condition can mimic pregnancy in that patients usually gain weight, don’t have periods, and feel 'different'."

Other reasons why your period may disappear include weight changes, or taking certain types of birth control.

The changes in hormone levels that occur during pregnancy can produce tender breasts. But just because your chest is achey doesn't mean you need to run to the pharmacy. Sore breasts are also a common side effect of PMS (nature's cruel joke). The day before your period comes, rising estrogen levels can cause discomfort in the chest area. Thankfully, it should return to normal when your period comes.

If you are sore after the gym, straining your pectoral muscles from strenuous exercise or heavy lifting can also cause chest pain. Fibrocystic breast tissue, a condition where breast tissue feels lumpy, may also cause tenderness and pain, especially during PMS.

Morning sickness is experienced in around 70% of pregnancies, but it's no guarantee that you're pregnant. Stress may be one cause of sickness in the mornings. "It's not uncommon for a very stressed person to feel tired and nauseous," Dr. Lipeles says.

"If you're having intestinal issues, it could be a primary gastrointestinal problem," Dr. Felice Gersh M.D., an OB-GYN, tells Bustle. Vomiting or an upset stomach can be a side effect of medications, intense stress, viral infections, ulcers, food poisoning, and many other reasons.

During the first trimester of pregnancy, fatigue is a common side effect due to the body's elevated levels of progesterone. This hormone can make you feel drowsy and tired, especially paired with the drops in blood pressure and blood sugar that pregnant people experience. However, exhaustion has many other possible causes. Different lifestyle factors such as too much physical activity, lack of sleep, or eating habits can leave you feeling wiped out. Dr. Lipeles says that starting new medications can also cause you to feel exhausted.

Fatigue may also be caused by a common medical condition like anemia, depression, kidney or liver problems, diabetes, or hyperthyroidism. Like nausea, fatigue is a hard symptom to pin down, so not all signs point to pregnancy.

Feeling a little emotionally out of control or weepy? That could be a sign of pregnancy, or also... not. In the beginning of a pregnancy hormones flood the body, creating the emotional rollercoaster effect. But if you are experiencing mood swings, there are many other things that may be playing with your hormones as well. PMS, menopause, stress, anxiety, depression, and even diet and exercise may be altering our hormone levels.

Feeling bloated is another symptom of pregnancy that is too similar for comfort to its cousin PMS. While hormonal fluctuations can make you feel like a balloon that should be popped, bloating can also be caused by gas, eating foods that are difficult to digest, eating too quickly, a side effect of certain medications or birth controls, as well as some diseases and serious medical conditions.

During pregnancy your bathroom schedule may be thrown out of whack due to the influx of the hormone progesterone, but constipation has many other causes. Taking calcium or iron supplements, irritable bowel syndrome, dietary changes or a low fiber diet, digestive problems, thyroid conditions, medications (such as certain anti-depressants), and stress can all lead to constipation. Dr. Gersh also says that if you experience blood in your stool, you shouldn't immediately assume it's pregnancy-induced hemorrhoids; it could be another kind of colon issue.

It may come as a surprise that two symptoms that resemble the beginning of the menstrual cycle are also indicative of pregnancy. During pregnancy, the spotting is called implantation bleeding. It is caused by the fertilized egg attaching itself to the wall of the uterus approximately two weeks after conception. But spotting can also be a result of starting a new birth control, stress, certain medications, infection, uterine fibroids, or a hormone imbalance.

The only real way to know whether or not you are pregnant is to take a test (and then have it confirmed with a blood test at the doctor's). Dr. Lipeles says that if you're not pregnant, but pregnancy symptoms persist for over three months, you should get yourself checked out for other potential causes.

More like this
The UK Abortion Laws In 2022, Explained
By Sophie McEvoy
6 Abortion Advocates To Follow On TikTok
By Sara Youngblood Gregory
How To Protect Your Digital Privacy If You Need An Abortion Post-Roe
By Kaitlyn Wylde
I Was All For Medicating Mental Health Issues – Just Not For Me
By Anonymous, as told to Dana Smith
Get Even More From Bustle — Sign Up For The Newsletter

This article was originally published on July 22, 2016