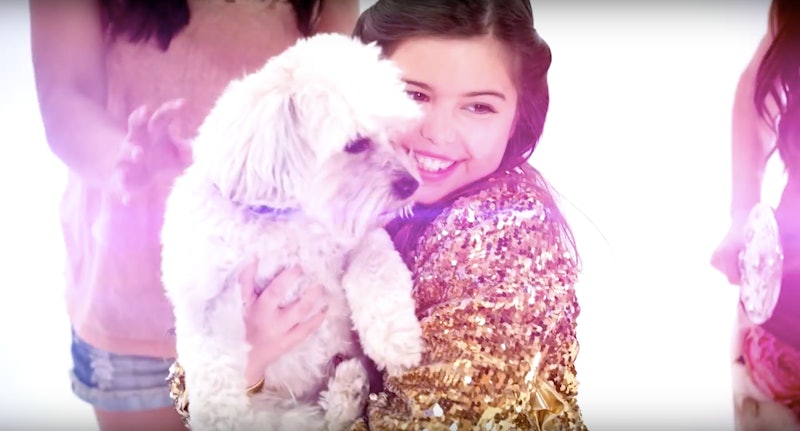 Sophia Grace was introduced to stardom at only 8 years old. Growing up in the spotlight can’t be easy, especially when the public eye will always have a certain complex that you’re twirling around in crowns and tutus. But five years since we saw her dominate The Ellen Show with her irresistibly cute raps and red carpet skills, the 13-year-old is reemerging with a pop tune that’ll give any girl out there the boost of self-esteem they need. She explains that her new single “Girl in the Mirror” featuring Silento is all about being “confident in yourself,” and it’s clear she practices what she preaches. Grace is not only is mature in her music, but in her real life, and she has lessons to live by that will hopefully help her remain grounded throughout all of her success.

Grace and I talk about how the “love yourself” message she’s conveying is mature for her age. Some lyrics from the new tune say, “I'm learning how to love me from my head down to my toes” and “I know who I am and I can't ever be replaced.” However, she says being in the business hasn’t necessarily caused her to grow up fast, despite what I had assumed. “No, not really. Because I don’t look grown up at all,” she jokes. Thanks to the help and support of her family, precautions are taken into consideration so Grace’s life isn’t rocked by negative effects of the media at such a young age. (As we’ve unfortunately seen happen before.)

“My dad runs all my social media so I don’t really see anything,” she explains, in regards to user comments and any potential hate. Although she keeps up with social media and YouTube (she has millions of views and over 1.4 million followers), mega stardom isn’t even something she desires:

I have a pretty normal life, I don’t really get recognized that much especially at home, so I just do normal things everyday with friends. So it’s not really any different. I don’t wanna be like really famous so I can’t even go to the shops or anything.

That said, navigating through people, especially friends, has become an unfortunate challenge for the singer, who’s home-schooled. Still, she’s doing a great job at keeping bad influences far away while maintaining a healthy work-life balance. “I have friends that I went to my elementary school with and I know they’re my real friends because they were friends with me before I was famous. But now when I meet people, I’m nervous,” she admits. “Just because I’m famous, do they want to be my friend? Or if it’s because they actually like me?” As a result, she says keeping true friends close to her is a conscience priority: “I’ve got a couple of friends. I think it’s better to have three really good friends than a big group of fake friends,” she says.

Although taking on the responsibility of the spotlight has its hurdles, she has learned a lot along the way since we saw her on Ellen five years ago. “I’ve learned a lot of things,” she says. “Probably to just have fun all the time, while you’re performing or if you’re doing something, don’t think about it too much just have fun with it.”

Amen, sister. And speaking of Ellen, I obviously had to ask about cousin Rosie, her partner in crime. While Miss Rosie has bowed out of the spotlight for the time being, she and Grace are still super tight. “Rosie is at home at the moment, she’s at school,” she says. “She can’t come out at the moment because her school is really strict. When I’m doing my music, it’s on my own. I see her every single day.”

It’s wonderful to see Grace, who’s only a teenager, know how important it is to keep family and true friends close. This isn’t easy for any teenager on earth, famous or not, ever. In addition to having priorities right when it comes to people she surrounds herself with, she has advice for young girls (or anyone, really) struggling to make it in the business:

And of course, there will always be the haters. No matter what people out there say or do, Grace seems to just brush the negativity off like leftover glitter from her video shoot. To anyone out there dealing with hate, she has advice: “Just ignore them and try and get on and carry on.”

More like this
Hilary Duff's Husband Matthew Koma Has Her Name Tattooed On His Butt
By Jake Viswanath and Stephanie Downs
Twitter Is In Awe Of Taylor Swift’s “Lavender Haze” Music Video
By Jake Viswanath
Twitter Wants To Dance With Anne Hathaway At Paris Fashion Week
By Alyssa Lapid
Hailee Kaleem Wright's Topsy-Turvy Path From MTV To Broadway
By Samantha Leach
Get Even More From Bustle — Sign Up For The Newsletter
From hair trends to relationship advice, our daily newsletter has everything you need to sound like a person who’s on TikTok, even if you aren’t.