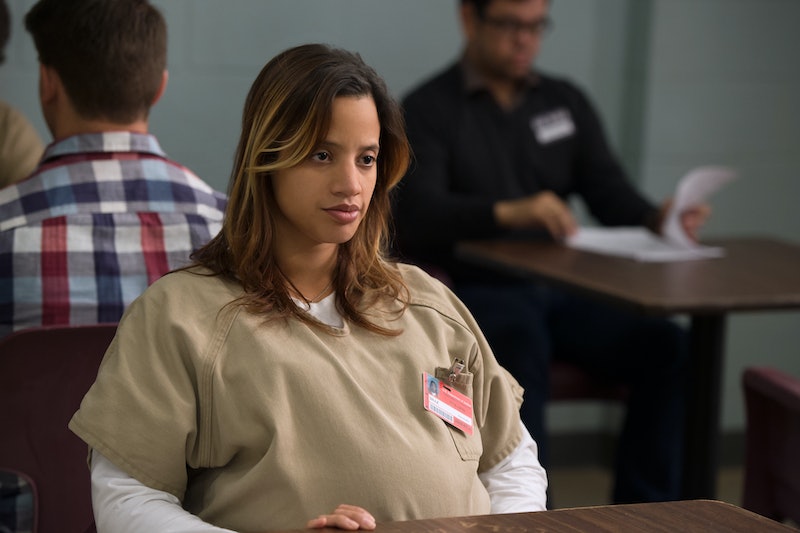 Season 3 of Orange is the New Black had a lot of positive moments, but left a whole lot of threads open for next year. What's going to happen to Daya's baby on Orange is the New Black when the Netflix series returns for Season 4? Dascha Polanco's character may have finally given birth to Daya and Bennett's daughter, but the newborn ended up in a precarious situation.

At the end of the season, it got complicated. Bennett was long gone. He drove off, effectively quitting his job and abandoning his daughter in the process. Daya was set to let the fake grandmother (a.k.a Mamma Pornstache) adopt her and give her a wealthy life. Then, when she was in labor, Daya's mother Aleida told Mendez's mother that Daya lost her baby. The baby went to Aleida's "domestic partner" Cesar, who in the Season 3 finale was busted and arrested. The kids were taken into custody by the state, and the newborn baby's future in unknown. Since Daya's relationship with Bennett and her pregnancy is probably the biggest story arc in this series next to Piper and Alex, I guarantee that we'll be following the progress of this child in Season 4. What will happen to her? It can go a few different ways.

The Baby Goes Into Foster Care

That's what happens realistically. With all known parents and guardians in prison, the baby goes to the state of New York. While this is sad for Daya's daughter, it could be interesting from a storytelling perspective. Orange is the New Black has done an excellent job satirizing the American prison system for three seasons, as well as local politics. This could be their opportunity to take on the foster care system as well. Of course, I don't want anything bad to happen to or at the expense of this innocent baby, but I would love to see how Jenji Kohan and her team of writers would portray this institution.

Wouldn't that be something? Bennett may have left in the early episodes of Season 3, but Matt McGorry has got to return to Orange is the New Black. I'm hoping that he pulls a Remus Lupin (my apologies if you've blocked out that Harry Potter and the Deathly Hallows reference) and comes back to rescue his daughter from the foster system and raise her. In fact, if Cesar was part of the reason he got spooked and fled, maybe news of his incarceration will draw John back. Since he's quit his job, he might as well publicly claim her as his daughter. This is all mostly my wishful thinking, of course.

How could this happen, you ask, now that she thinks the baby is dead? Prison is a pretty small world. Cesar could be placed in the same facility as Mendez. What if they get to talking? This isn't that complicated of a conspiracy, and Mary Steenburgen's character could still arrange to adopt the baby — especially now that she's in the system herself. We don't know who was listed on the birth certificate as the child's father. If it was Pornstache and not John Bennett, then Mrs. Powell may have already been contacted.