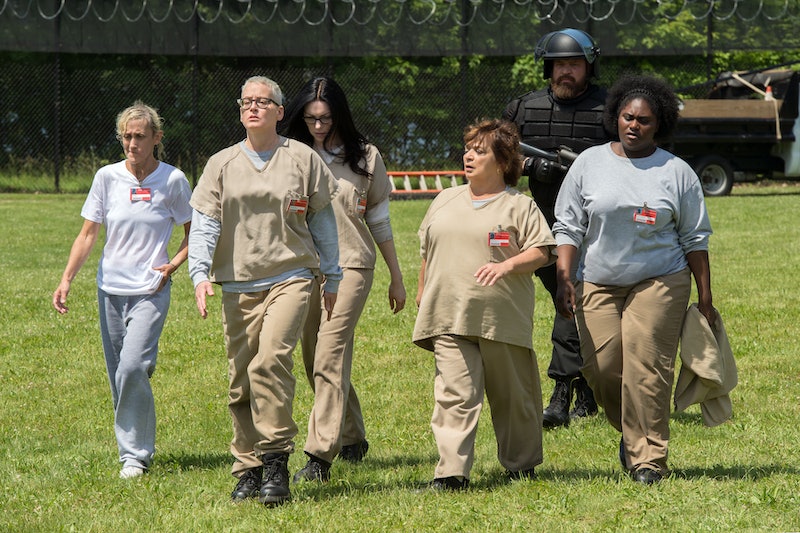 Music sets the tone for a lot of things, and it's always nice when a television show takes advantage of that to tie songs in with the events of an episode. No show does this better than Orange is the New Black Season 4, whose end credits songs are spot on for each episode. From the upbeat ukulele song in the first episode, "Motherfucker Got Fucked Up" to the use of a Cabaret song in an episode about white supremacy gangs, OITNB really brought their musical A-game this time around.

It's to be expected, though, considering their theme song was also a smash hit. "You've Got Time" by Regina Spektor sets the tone from the instant the intro starts to play. The song was written specifically for the show, according to Rolling Stone. Spektor had also previously recorded a "Little Boxes" cover for Weeds, which is OITNB creator Jenji Kohan's other show.

So, considering the show has always placed importance on music setting the tone, it's no surprise that every episode in Season 4 closes with a tune that perfectly captures the events of the episode in question. Take a look at the list for yourself: [Mild spoilers for Season 4 ahead.]

Episode 1 — "Motherfucker Got Fucked Up"

The Rita Indiana & Los Mysterios song signaled the power shift from Piper to Maria and her crew.

The Eminem track features Dr. Dre and Snoop Dogg and is all about how you can only trust yourself, which made it a good complement to the episode where they consider killing Lolly to keep her quiet.

This song is by The Fling and its title coincides well with the episode where we learned about Healy's mother's mental illness.

Episode 5 — "Tomorrow Belongs To Me"

This was sung by a young Nazi in the film Cabaret to stir up support for the party. It also happens to conclude the episode where Piper accidentally starts a White Supremacy gang.

This Sharon Van Etten song closes out the episode where we see Nicky fall off the wagon again.

The title of this Izabo song is pretty dark considering the disturbing events of the episode that left Piper branded with a swastika on her arm.

This Hoagy Lands number is the perfect accompaniment to Piper getting her swastika brand changed to a window.

It made sense that Blanca's determination to not let the C.O.s get her down was accompanied by this song by The Bug Feat. Warrior Queen.

The title of this Jonathan Rado song is fitting considering Aydin's hand was found in the final moments of this episode.

Again, another fitting title since this DeQn Sue song was featured at the end of the episode where the C.O.s made Suzanne and Maureen fight.

This touching song by Corrina Repp has lyrics that will make you cry when you consider the horrific end to Episode 12 with Poussey.

This LP song concluded the series, which was on the whole very dark. But, it also touched on so many important issues, and this song was a brilliant sendoff.

More like this
Taylor Swift Visited The 'Glee' Set For This Bizarre Season 5 Episode
By Grace Wehniainen
Ashton Kutcher Wants Danny Masterson “To Be Found Innocent” In Rape Retrial
By Jake Viswanath
This 'Gossip Girl' Wardrobe Error Has Gone Viral On TikTok
By Alyssa Lapid
All The ’70s Easter Eggs You Missed In 'That ’90s Show'
By Grace Wehniainen
Get Even More From Bustle — Sign Up For The Newsletter
From hair trends to relationship advice, our daily newsletter has everything you need to sound like a person who’s on TikTok, even if you aren’t.