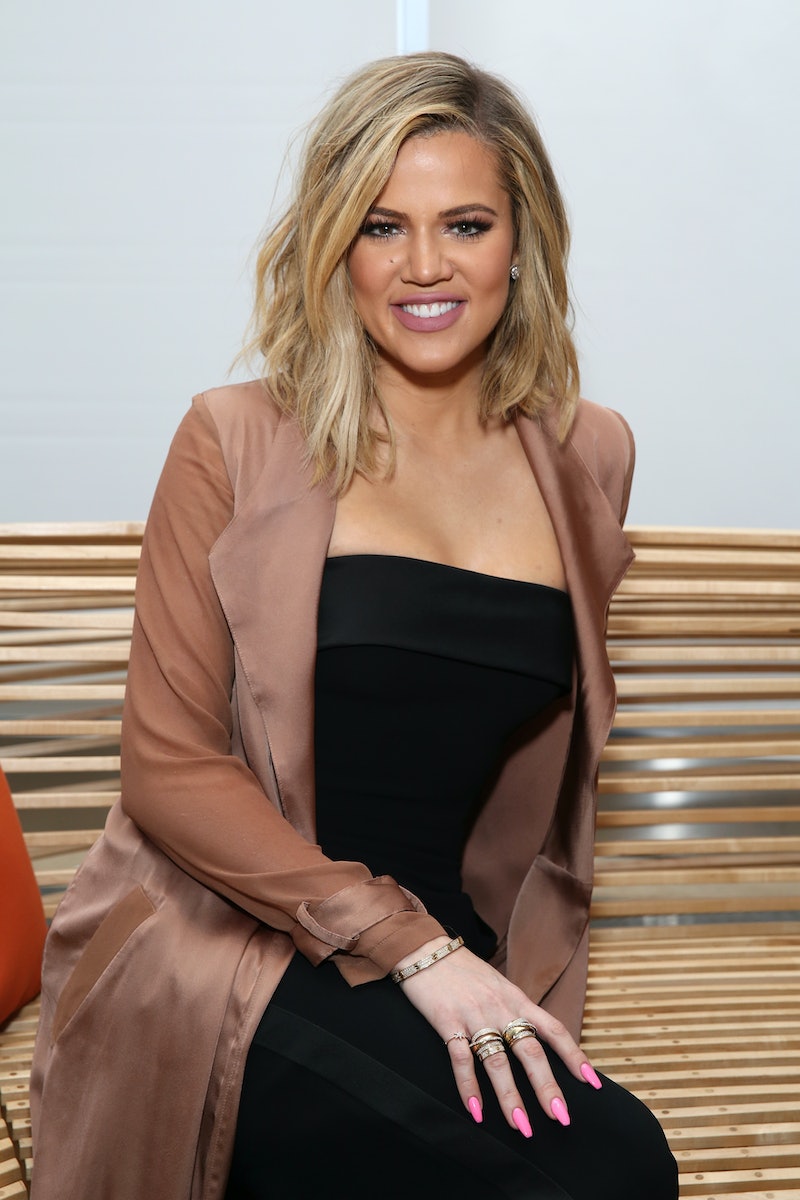 The Kardashian/Jenner clan likes to mix it up in the hair department, and the latest sister to rock a dramatically different ‘do is none other than Khloé. On June 18, Kardashian took a tip from her little sis Kylie and sported lavender-colored locks. Khloé Kardashian’s purple hair, while a major departure from her normally blonde tresses, was definitely #hairgoals.

Kardashian has never been one to shy away from a mane transformation — remember her lob back in Jan. 2016? However, I have a sneaking suspicion that this look, blunt bangs and all, is only temporary. In an Instagram post shared on June 18, in which she debuted her purple locks, Kardashian wrote, “When your nieces request you wear lavender hair to their mermaid party. You wear lavender hair. Anything for my babies! 💜” While it looks like the reality star borrowed a page from Kylie’s book and sported a wig just for the day, I have to say that wig or no wig, Kardashian is killing it in this lavender hue.

Although I am not 100 percent certain as to whether Kardashian's hair is real or fake, I'm willing to bet the latter is true. She posted a photo to her Instagram just hours later sans purple hair and bangs. Even though Kardashian's purple hair days were short-lived, she and her sisters' hair transformations are a-plenty. To get a closer look at the beauty maven's lavender-hued mane, and the Kardashian family's greatest hair transformations of all time, just scroll down.

Khloé Kardashian has been known to switch her hair color from brown to blonde and back, but, unlike her sister Kylie, she has never really ventured into hair colors of the rainbow. That is until now. While this lavender hue was unexpected for this Kardashian, I have to say that I kind of dig the color for summer.

Kendall Jenner seems to be the most conservative with her hair, so when she cut off a few inches, it was kind of a big deal.

Kylie's sleek bob — sported to the 2016 Met Gala — was a major change from her long and often colored locks.

Who could forget the technicolor braids that Kylie sported at Coachella 2016?

Oh, and that highlighter hair. That was pretty unforgettable, too.

Kim has tried platinum blonde a time or two, but the long blonde locks that she sported at her beau's Yeezy Fall 2016 presentation were #hairgoals.

Khloé took her bronde hair to a whole other level when she chopped her locks into an edgy lob.

Kendall rarely switches up her hair. However, she rocked a blonde wig for none other than Balmain.

Because Fashion Week requires a standout head of hair.

Before bronde was cool, Khloé was rocking the multi-dimensional hue.

This was quite possibly Kylie's most famous shade.

The color that started it all, Kylie's first major hair moment was when she sported this teal hue in 2014.

Needless to say, the Kardashian/Jenner hair game is always on point.