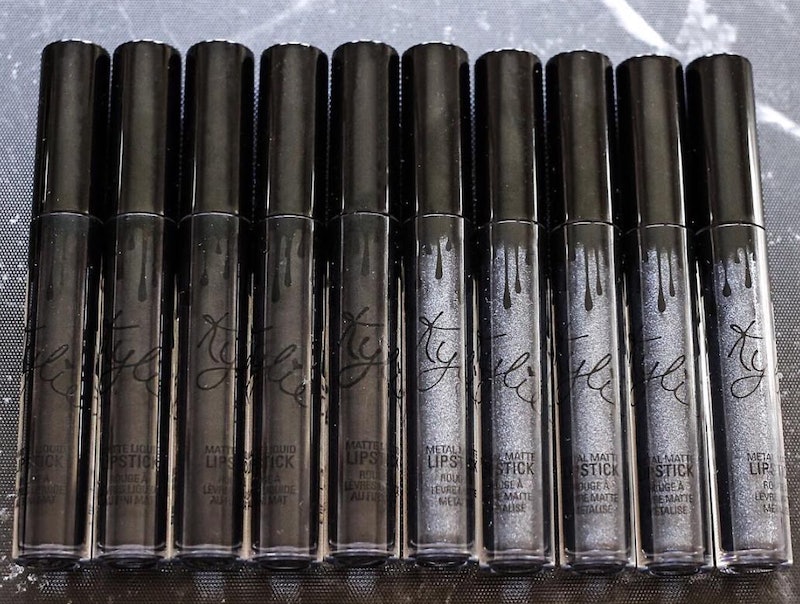 Once again, Kylie Jenner keeps us on our toes with her Lip Kits and Metal Mattes. Kylie Cosmetics dropped both the matte black Dead of Knight Lip Kit and the blue x silver x black KyMajesty Metal Matte this month. Dead of Knight and KyMajsety sold out because of course they did.

However, the brand confirmed that Dead of Knight and KyMajesty will be unavailable for "a while." Kylie Cosmetics stated that Tuesday, June 21 at 11 a.m. PT is the last time both black shades will be sold... for now. OMG, why?

Breathe. Just breathe, Lip Kit lovers and Metal Matte maniacs. Remember that Jenner herself confirmed via Snapchat that she has two new exclusive Lip Kit shades that she is making available on Friday, June 24 so that fans and customers can have the new hues for the Fourth of July holiday.

She has yet to tease those shades but we know she will! So, how about accentuating the positive? There are two restocks this week, including Dead of Knight and KyMajesty before they go on sabbatical. There are two new colors coming. So let's get a "Yay" for both pieces of good news.

But there are other reasons not to fret about the pause in production of DoK and KyMaj.

This is the Insta post regarding the status of the two black shades.

Boo! Once again, the brand confirmed via its official Instagram that KyMajesty is going bye bye for a bit.

Here is why you shouldn't lose your mind, besides the fact that new lippies will arrive on the scene soon.

Notice, they did not say that the rich, velvety Dead of Knight or the multi-dimensional KyMajesty were being "discontinued" or going away permanently. They just said for "a while." That means their MIA status is temporary. "A while" is fluid and it's a subjective term. We don't know the length of time, but "a while" is not "forever." So there's that.

Also, it's summer! Lighter, softer, and less-defined lips are a thing. Super gothic, black lips are better served in cooler, autumnal months. So perhaps Jenner and her team are pulling these shades until the season changes and demand is higher.

There are other plausible scenarios. Perhaps her production facility needs to focus on pumping out tubes of the brand new, to-be-released shades. Maybe the Knight Kit or the KyMajesty formulas are harder to manufacture. The team could even be further perfecting the formula for those shades. Or they could be making them harder to get to increase the hype, the customer desire for them, and to enhance their kult status.

There are a myriad of possible reasons and it's not likely that Jenner will share what they are. That's her right.

Just remember that the black Kylie Cosmetics lip products are going on a temporary hiatus and we have new shades landing!