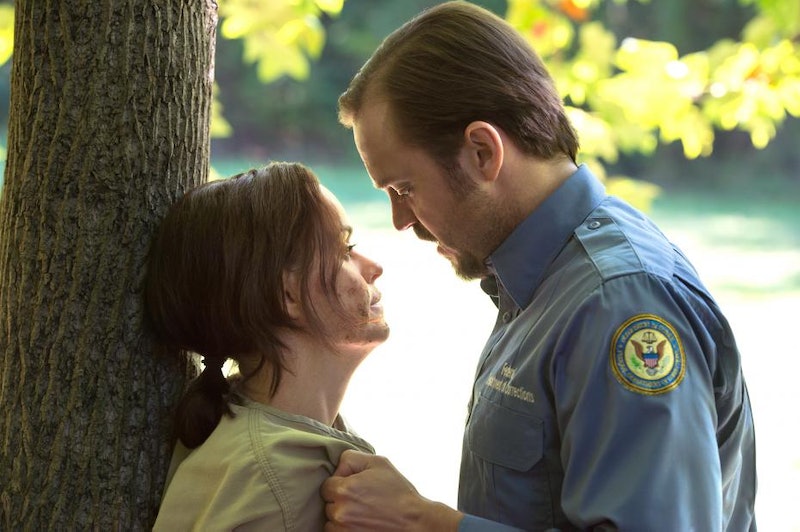 If, like me, you've emotionally exhausted yourself this past weekend by marathoning Season 4 of Orange Is the New Black (despite promises that you wouldn't "rush through it" this time), then you'll already be plenty aware of the harsh, emotional storylines that built up with every episode. There were endless plots which made me grimace with horror, sob at the tragedy, and feel some genuine hurt for the inmates of Litchfield Penitentiary. But as a sexual assault survivor, it was Tiffany "Pennsatucky" Dogget's continued rape subplot which really picked away at me on a personal level. When the heartbreaking storyline was first introduced in Season 3, it made for intensely difficult viewing, though it was thoughtfully executed. The rape scenes feel like an unnecessary plot device, there simply for exploitation and shock value. Instead, they were well-written and incredibly acted, whilst holding what felt like the utmost respect for any survivors watching the show.

Flashbacks gave us uncomfortable insight into the repeated sexual assaults Pennsatucky had suffered throughout her life at the hands of people she knew, or even trusted. The harrowing abuse appeared to follow the character into prison, as she was once again raped, this time by C.O. Charlie Coates. The two initially shared some chemistry, but Coates’ inappropriate behavior toward her instantly raised alarm bells in viewers such as myself.

Conspicuously “nice," he bought Pennsatucky donuts, allowed her out of the van to visit some ducks in a park, and basically treated her like they were off on a date rather than doing official prison business. His behavior was charming and flattering, but it was also toxic. The power dynamics of their relationship gave him ultimate control over where the parameters of their apparent “romance” lay, and what that meant he could do to her as a result. As such, what appeared to be kind gestures where actually a grotesque form of sexual currency, which in his mind granted him a certain sense of entitlement over the inmate he was responsible for. What he considered to be some kind of romantic foreplay was actually a way for him to tighten a leash around Pennsatucky’s freedom of choice — made disturbingly apparent when he delighted in demanding she get down on all fours and act like a dog.

Though my own experience was nowhere near as brutal, it felt just as calculated. Part of the violence of Pennsatucky's assault, as well as my own, comes from the abuse of trust that was used in order to achieve it. Though I wasn't resigned to the act as it happened to me (I was unconscious for much of it), I definitely felt resigned to the fact that it had happened, and just wanted to move on from it as quickly as possible. There's one harrowing scene in particular in Season 3 which seemed to so perfectly illustrate this feeling.

At one point, Coates traps Pennsatucky in the back seat of the van and proceeds to assault her. She initially struggles, but eventually becomes complacent once she realizes there's no escape. She goes sad but blank, taking the attack with an unsettling sense of acceptance, as if it is somehow her miserable destiny to receive it. It’s clear that she believes that she’s complicit in what is happening to her, and also that she’s utterly powerless to prevent it. It’s only when Big Boo learns of the attack that Pennsatucky is convinced that what happened to her was rape, and that she most definitely didn’t deserve it.

Spoilers for Season 4 ahead. But the aftermath of rape is far more complicated than straightforward acceptance, and that's as vital a point as it was for the show to portray the act in the first place. Season 4 shows Pennsatucky eager to protect other inmates from suffering the same fate at the hands of her rapist, as well as confronting him with the truth of what he did to her. In a scene which felt eerily similar to one of my own experiences when I was forced to confront my rapist, Pennsatucky questions whether Coates is having sex with the new driver of the van. He simply laughs her off and accuses her of being jealous. She shoots back: “I just want to make sure you’re not raping her, is all."

Here, Coates’ facial expression says it all. He’s horrified, shocked, confused, and hurt. Rape clearly isn’t something that has even crossed his mind about what had happened between the two of them. Worse still, he tries to excuse his actions with sentiments of love. “But I love you,” he tells her, sincerely. “I told you that. And I said it when … When I said it. So that makes it different."

This conversation felt all too real to me. Following my attack, I endured a horrifying phone call from my attacker in which, shaken and traumatized, I tried to explain what he did to me and convince him that his version of the events was skewed. I had to face him directly and attempt to replace the language of his story with the language of mine. Assault. Attack. Non-consenting. Rape. I recognized Coates’ facial expression as that of my own assailant — disgusted disbelief and outraged confusion.

Clearly, the man who attacked me thought of rapists as monsters rather than regular, everyday people. He obviously thought that rape had a specific location (dark alleyway), a specific victim (a stranger), and a specific attacker (someone violent and unstable) — none of which fit the bill when he attacked me, a close friend, in my own bed. The reality is that rape doesn’t embody one specific situation, just as it doesn't affect one specific type of person in a specific place. Rape can be random, sure, but it can also be familiar. It can happen with someone whom we might trust, respect, or in some cases even love. But familiarity doesn’t legitimize entitlement, and as such, it definitely doesn’t excuse rape.

OITNB has dealt with this brilliantly in Season 4, not only in showing the self-doubt that Pennsatucky is experiencing and the troubling forgiveness she's willing to grant her assailant, but also in showing Coates coming to terms with the fact that he did rape her. He lashes out at his fellow guards when they disrespect the inmates, he’s introspective and forlorn, and he seems genuinely troubled by what he’s done to her, leading up to an apology which appears to confuse Pennsatucky even further. She opens up to a mortified Boo, revealing that Coates was “sweet about it all” and implies that she’s ready to forgive and forget his “mistake." She tells her horrified friend, “I’m so tired of walking around feeling sh*tty every day," implying that though the assault will never "go away," she'd be happier pretending that the whole thing never happened, rather than deal with the very real implications and trauma of it. She continues: "What if he’s just, like, a regular person who made a mistake, right? I mean, come on, we both know that I’m not innocent."

This sentence painfully sums up how confusing the aftermath of my own sexual assault was, with the personality and behaviour of my assailant feeling completely at odds with what he did to me. His and our mutual friends' insistence that he was a good, nice person who was completely incapable of doing something so violent and ugly filled my head with doubt. In turn, I found myself accepting responsibility for the assault, just as Pennsatucky did, and wrongly blaming it on my own sexuality rather than face up to the more complex, dark, and difficult motives that my assailant may have had.

In the years that followed my assault, I found myself defending the man who attacked me — telling everyone that it wasn’t his fault, that he had no idea he was doing what he was doing, that he was drunk and out of control, and that for as long as I’d known him, he’d been a really good person. It made me feel better to deny that the thing had ever happened quite as brutally as it had felt at the time. But as many of my friends reminded me, none of that was true. No matter how nice he ever was to me, he deserved to be held accountable for what he did, and to feel just as terrible about it as I have. Orange Is the New Black is certainly stirring up controversy, having Pennsatucky not only forgive her attacker, but also plant a kiss on his lips in the fourth season finale. But the show appears eager to show the complexities of trauma while also making a statement about our current rape culture, which sees many attackers represented sympathetically in the media while survivors can find themselves blamed.

The aftermath of a rape is a harrowing and confusing time, and forgiveness can feel easier than processing the reality of the act and engaging the trauma that comes with it. Too many TV shows want to show the act but not the consequences, and OITNB should be applauded for daring to portray both in such a way that is anything but simple. With such trauma can come a false sense of sympathy, because we all want to believe the best about humanity. Rapists are “regular” people, make no mistake. But offering them the same standards of humanity which they refused to give to the person they assaulted isn’t just irregular; it’s monstrous.

More like this
UK Viewers Will Have To Wait To Watch The Handmaid’s Tale S5
By Maxine Harrison
15 Offensive AF Jokes In 'Friends' That Really Aren't OK
By Tolly Wright, Bustle Editors and Meguire Hennes
Women Around The World Are Cutting Their Hair In Solidarity With Mahsa Amini
By Darshita Goyal
Black Women's Equal Pay Day Highlights An Upsetting Problem
By Brandi Neal
Get Even More From Bustle — Sign Up For The Newsletter