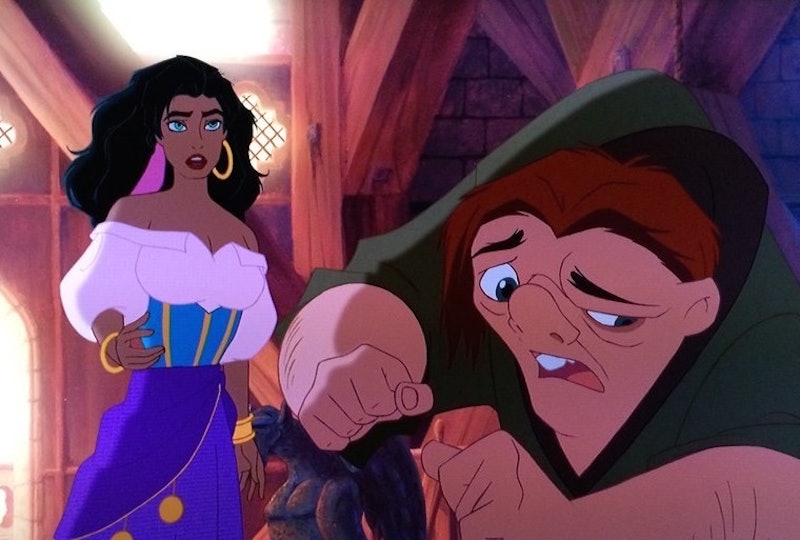 I was only 10 years old at the time that Disney released The Hunchback of Notre Dame in movies theaters on June 21, 1996, but I remember going with my older sister and my little cousin to see the latest Disney movie. My cousin cowered at Frollo's "Hellfire," and though I was older, I couldn't even pretend that I also wasn't a bit freaked out by the scary fire imagery and religious and sexual themes. I couldn't articulate it 20 years ago, but Hunchback was too damn much for my developing brain to handle.

Yet, The Hunchback of Notre Dame was one of my favorite Disney films even though it wasn't as universally adored like say, The Lion King, before it. (Perhaps I should note that I have at least 10 "favorite Disney films.") I continued to be obsessed with Hunchback well into my teenage years with "God Help the Outcasts" being one of my favorite songs to sing. So, could the movie still hold up now that it is 20 years old and I'm a legitimate adult?

Of course, Victor Hugo's The Hunchback of Notre Dame isn't really appropriate source material for a children's animated film, but the Disney movie did teach a valuable lesson about how wrong it is to be cruel toward people who are different through Quasimodo and Esmeralda and the other gypsies. And 20 years later, that message is there although a little more blurred, but that doesn't mean it wasn't thoroughly enjoyable to rewatch the movie. To celebrate 20 years of this underrated Disney gem, here are 19 things I noticed when I rewatched The Hunchback of Notre Dame as an adult — the good and the bad.

1. The Music Is Still Epic

Almost every song in the movie is solid, even if the themes are too adult for kids. The opening of "The Bells of Notre Dame" manages to be frightening, joyous, and informative all at the same time. "Out There" gave me goosebumps and left me teary-eyed. And I still know every word to "God Help the Outcasts." The only dud in the movie is "The Court of Miracles." Ah, remember the good old days when Disney animated films were packed with quality songs?

Clopin gives the terrifying backstory of how Quasimodo came to be and one of the onlooking children is not like the others with his monk-styled outfit. Also, why does Clopin think it's appropriate to tell these kids how Frollo wanted to dump a baby in a well?

3. The Feast Of Fools Is A "Shallow, Drunken Stupor"

Frollo's assessment of the "peasant festival" being a "drunken stupor" totally went over my head as a kid, but there is evidence of this when you look at how much ale is consumed toward the end of "Topsy Turvy." Ample amounts of booze consumed definitely helps explain how the people attending the FOF (Jason Alexander's gargoyle's abbreviation — not mine) turned so nasty so quickly on Quasimodo and began to torture him.

While you could think that Phoebus' horse being named Achilles was a nod to Greek mythologoy since Apollo, the Greek name of the Roman god Phoebus, helped Paris to defeat Achilles in The Iliad (hey! Hunchback even takes place in Paris!), that's not why the horse has that name. Astute viewers will notice that Phoebus says, "Achilles, heel" as a play on words about the body part named after the Greek story. The book From Screen To Theme confirms that the writers named the horse solely for the joke and the puns don't end there. Phoebus says to Esmeralda, "I didn't know you had a kid" about her goat Djali and Clopin has fun with hanging Quasi and Phoebus when he says "good noose" (instead of "good news") and calls the event a "double header." Har har, Disney.

5. The Goat Smokes A Pipe

The captain of the guard prior to Phoebus gets lashed offscreen and Frollo even makes a "whip my men into shape" joke. You don't see the character being tortured, but damn Disney — you're dark.

7. Esmeralda Is Immediately A Sexual Object

Coincidentally, the same month and year that The Hunchback of Notre Dame was released, Demi Moore's film Striptease was in theaters. Is that why Esmeralda uses a spear to pole dance? Regardless, I blame Disney for making the gypsy dancer voiced by Moore look like a stripper in a children's film — think Jasmine as Jafar's slave in the red outfit levels of sexualization.

This woman really was ahead of her time.

9. Quasimodo Suffers From An Extreme Case Of Stockholm Syndrome

Maybe Quasimodo's devotion to the obviously evil Frollo was the reason that Esmeralda felt the need to leave the safety of Notre Dame instantly after Phoebus had her use the "sanctuary" card. I know she's a gypsy and all and needs to roam, but a little down time in the church wouldn't have killed her. And actually, it would have saved a lot of other people from Frollo's wrath.

I swore I heard one of the Paris soldiers use a French accent while searching for Esmeralda. Uhhh, either everyone has to have a French accent or no one should since the movie takes place in France. Damn you, Lumière, for making this acceptable in Disney films!

11. Frollo Is Still The Creepiest

OK, so I get that the song "Hellfire" exists to explain Frollo's motivation, but I was super uncomfortable with the dancing flame Esmeralda and watching Frollo rub Esmeralda's scarf all over his face. I'm pretty sure I felt uncomfortable when I watched it as a kid too, but now I truly understand the inappropriateness. Maybe I can forgive this scene since they have Frollo appear hungover the morning after "Hellfire" and he explains it away by saying, "I had a little trouble with the fireplace."

If you can ignore all the sadism and sexual harassment, you gotta admit that Frollo's got a pretty solid ring game.

The gypsy community is very supportive considering that even with Frollo being so menacing, no one gave up Esmeralda's whereabouts.

I'm all about the gargoyles being supportive, but for professional observers, they should have known not to get Quasi's hopes up that Esmeralda liked him. They even sang a damn song about it — c'mon Victor, Hugo, and Laverne! Plus, there was a really forced rhyme about a croissant in "A Guy Like You." Props for the Victor Hugo reference though!

As with every Disney movie, Phoebus and Esmeralda become romantically attached super fast, but I'm actually more concerned that they didn't seem to care that Quasi was standing right there during their make out session.

Speaking of things moving quickly, any time Frollo tried to light something on fire, it went up in flames instantly. Perhaps this is why I always think starting a campfire will be easier than it is.

So, remember when Phoebus got escorted to Notre Dame cause he was pierced by an arrow? None of that mattered once he heard Esmeralda was in danger. That's true Disney love for you!

18. The Wizard Of Oz Reference

I feel like I would have picked up on this as a child, but I definitely didn't remember Laverne saying, "Fly my pretties!" to her birds like the Wicked Witch of the West.

He's the voice of Phoebus, but the talented performer gets shafted without a song to sing.

While I fully grasp 20 years later that The Hunchback of Notre Dame is one of most inappropriate Disney films "out there" (song pun intended), I can't imagine not having this beloved movie in my life when I was 10 or even now that I'm 30.