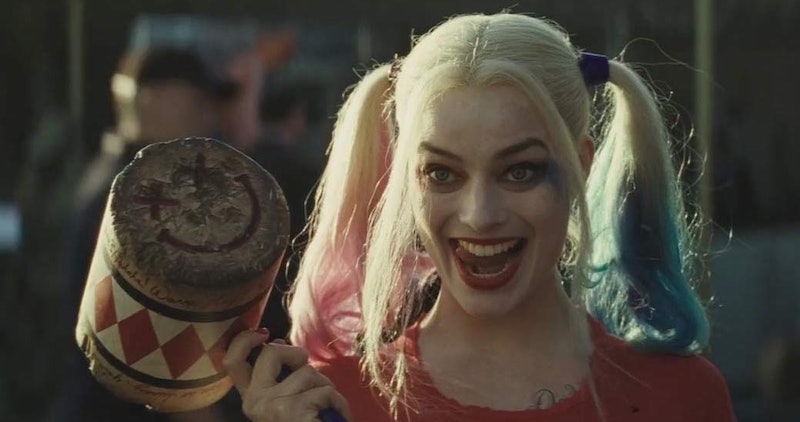 We still have about a month and a half until Suicide Squad hits theaters, and I already can't go out in blonde pigtails without fielding Harley Quinn comments. The film's marketing and the organic hype have already insured it's going to be big, and the newest Suicide Squad poster is just the latest proof that solidifies the film will be, first and foremost, fun. It features a bowl of Lucky Charms-esque cereal featuring bite-size marshmallow version of the Squad's faces... perfectly on brand, if only because a marshmallow-exclusive cereal is a sociopathic cereal. But make no mistake, the primary goal of the Suicide Puffs (Suicide-Os?) is to frame the movie as the DC's most playful entree yet... and hopefully draw in a bigger audience.

Consider, for a second, that films based on DC comics tend of veer on the side of dark and gritty. This was done perhaps most successfully with 2008's The Dark Knight, and only slightly less successfully with it's 2012 follow-up The Dark Knight Rises. Both films tackled the classic Batman story with a frightening realism, portraying the respective villains as twisted terrorists versus cartoonish caricatures.

On the other side of the fence you have Marvel, a company that continuously take risks with it's properties. No superhero novice could've guessed that Guardians of the Galaxy would've ended up a smash hit; I referred to it as the "movie with the talking raccoon" until my brother tuned me into the intergalactic hilarity of Star-Lord and friends. Or what about Ant-Man, a side-eye worthy character at best, until you see Paul Rudd throwing shade at his own name in the trailer. From the get-go, it shows that the movie is sort of "in" on the joke. And then there's Deadpool... I mean, what can be said about the fourth-wall-breaking anti-hero that hasn't been said already? In short, Marvel has raked in a lot of money by taking a tongue-in-cheek approach.

And that leaves a lot riding on the success of Suicide Squad, which has since been packaged through the trailers as a "Ballroom Blitz" bamboozle of lolz. Coincidence? The injection of Harley and the Bleached-Travis-Barker version of the Joker promised it would be joke-filled from the get-go. However, it's fair to say that DC is using this opportunity to say they can be fun, too. The only snag is that full-on mimicry would be evident, so they're going to do it the DC way, which I think they will.

Fingers crossed that it's really as delightfully bonkers as it looks... otherwise, joke's on us. Suicide Squad hits theaters August 5.