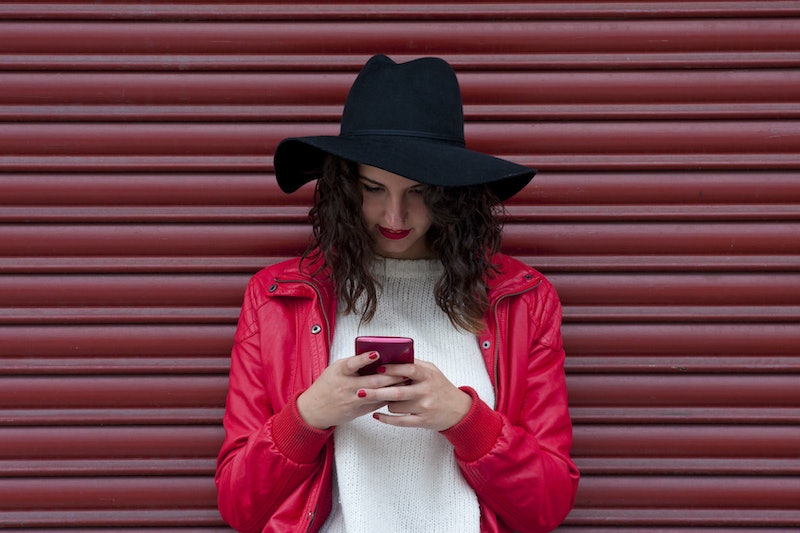 In an age when it's more common to be swiping on Tinder at the bar than actually trying to find a partner in the wild, it's pretty likely that, at some point, you've interacted with someone who you were later tempted to ghost. Whether you just realized there's no spark and want to quietly move on, or you're on the receiving end of aggressive texts from a romance-gone-wrong, ghosting on someone seems to be the go-to move among Millennials. But the art of the slow fade can be difficult to execute, particularly if you're the kind of person to feel guilty about hurting someone's feelings. So what can you do if you want someone to leave you alone (other than saying it outright)?

Enter: Ghostbot, the smart new bot that will help you get rid of unwanted romantic partners with no hassle on your part. Brought to you by Burner, an app for throwaway phone numbers, and the bot makers at Voxable, Ghostbot uses Natural Language Processing (NLP) to shut down anyone you're not interested in. Yes, we are living in the future where robots can handle our misguided love affairs, and I have to admit that it's awesome.

I spoke to Greg Cohn, co-founder and CEO of Burner, and Lauren Golembiewski, a designer that Burner partnered with to help create the Ghostbot, to find out how they came up with the idea, and how it all works.

"We looked at the broken culture of dating, the aggressive and inflammatory situations that people — for the most part women — get into through online communities... Bye Felipe was a point of inspiration for us," Golembiewski tells Bustle. With the over-the-top messages from scorned lovers in mind, Ghostbot was born, and helps us in all kinds of ghosting situations, from the 'sorry, just not interested' to the 'whoa, cool it with the unsolicited dick pics'.

They studied accounts like Bye Felipe in order to teach the bot to anticipate all kinds of responses from the people being ghosted. There are 20 to 30 categories of responses and — whether it's a pickup line, lewd comment, or casual hangout request — Ghostbot will read the message and reply accordingly. If someone is insulting you, Ghostbot will turn up the snark, if things are casual, Ghostbot will let the other person down gently, and if someone is threatening you, Ghostbot auto-blocks them. In short, Ghostbot has a personality, and isn't afraid to show it. It's also genderless, so there are no awkward messaging mishaps, regardless of your gender or sexual orientation.

So what's the first step to using Ghostbot? Download the Burner app, and use a throwaway number with anyone you meet online. Cohn said he's a huge proponent of using caution when it comes to online privacy (especially re: dating), and as someone who's had to block a lot of numbers, I must concede that a Burner number isn't a half-bad idea.

"I think there's an emerging awareness that there are problematic behaviors in the world of texting," Cohn said. "The idea that people are talking about being thoughtful and safe, and taking lightweight precautions against risky behavior is a good thing."

Once you're texting someone via Burner and things start to go sour, simply switch on Ghostbot for that person's number, and sit back as the magic unfolds (you can still access the convo, if you want to keep an eye on your bot). I tested it out, and here's what it looks like:

And all Ghostbot had to say to my (more polite than usual) 'screw you' was "yep." So is it perfect? No, of course not. Ghostbot learns as it goes, and may not always have the best or most fitting response; it's the price you pay to be laissez-faire about your ghosting. And Cohn is quick to note that Ghostbot isn't necessarily always appropriate: "It's not for breaking up with your boyfriend for you. The idea is, in a real relationship, you're past the Burner [and Ghostbot] point," he says. It's simply another option for getting rid of a Tinder match gone wrong.

It may seem harsh to have a robot end things with someone on your behalf, but in a world where cyber-aggression is unfortunately common (especially when it comes to dating apps), it's definitely a nice alternative to have. If you need me, I'll be texting Ghostbot, trying to trick it into loving me.