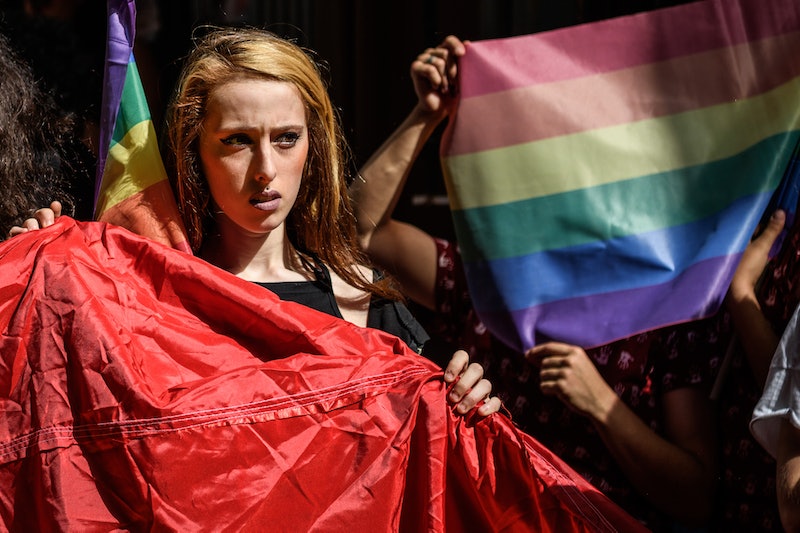 For the LGBTQ+ community, June generally means one thing: Pride. While many localities have already celebrated their Pride festivities, Monday kicked off the official Pride Week, and cities all over the country are marking the occasion with the parades, marches, festivals, and parties that have come to be emblematic of the celebration. For most of the last 40 years, Pride festivities have been largely the exclusive realm of the LGBTQ+ community. However, as acceptance of the community has grown over the last 15 years, more and more straight, cisgender people have been attending Pride celebrations, either as allies to community or as spectators.

Unfortunately, while there are many cis straight folks who are perfectly respectful and comport themselves as real allies, there's been a growing trend in many places of folks showing up to "people watch" at Pride, as if it were some kind of sporting event or elaborate performance for their enjoyment. As Pride is supposed to among the pinnacle of safe places for LGBTQ+ folks to simply be themselves, hearing people snicker or make rude comments or stare at you ruins that atmosphere for the attendees, many of whom have to deal with that kind of treatment in their everyday lives.

To that end, if you are a person who is not a member of the LGBTQ+ community who is attending Pride, here are 10 important rules you ought to keep in mind, all gleaned from actual experiences I've had at Pride over the years.

1. Learn what Pride is all about.

Pride is so much more than just a weekend of people drinking heavily while wearing rainbows and glitter. Pride has a rich history dating back to the 1969 Stonewall Riots here in the U.S., and to the 1981 Bathhouse Raids in Canada. It is an event rooted in political activism for LGBTQ+ rights, for protesting our mistreatment and marginalization at the hands of police and political powers, and for memorializing those who have died fighting for our cause. We should also, never, ever forget that the Stonewall Riots that launched this movement were kicked off by two trans women of color, Marsha P. John and Sylvia Rivera.

2. Be mindful of the language you use.

You should never be using slurs to refer to members of the LGBTQ+ community, but you should especially not be using them during Pride. This can be confusing for people, since many people have made efforts to reclaim slurs, with the word "queer" being among the most prominent. However, if you're not a member of the group that slur applies to, you still should absolutely not be using that term.

3. Do everything in your power to decenter yourself.

I'm going to lay it on the line cold for you: If you are a cisgender straight person, Pride isn't about you.

This is the one time of year that everything is about us. Let us have our week. Don't interject your opinions about the current political goings on of our community. Don't ask people to give you a 101 on any LGBTQ+ identity. Don't take your bachelorette party into gay bars throwing after-parties. And please do not run around looking for praise for what a good ally you've been this year. There is no gay Santa Claus who will give you cookies.

4. Stay out of spaces that aren't for you.

There are many Pride events that are organized around a specific identity or marginalized groups. These include things like a Dyke March or Trans March, picnics for queer people of color, or a rally for disabled queer and trans folks. Those spaces are created for a reason, and you should absolutely respect their boundaries.

Even within the LGBTQ+ community, there are complex power dynamics, and these kinds of events are extremely important opportunities for more marginalized groups with the wider community to find safety and community. If you are not part of the targeted demographic, it's just not a place you should be.

Pride is a space where you might see a lot of things that you are not regularly exposed to. There might be members of the leather community in their gear, over-the-top drag queens, people in very little clothing, and a lot of public displays of affection between queer couples. There's a significant chance that you'll see more trans people than you've ever seen in one place before. The LGBTQ+ community tends go all-out during Pride, both because it's a rare place where it's safe to do so, and as a general act of rebelliousness against heteronormative society. Pride can be a wild place.

That said, it's absolutely not OK to show up to Pride just to "stare at the freaks," as I've actually often heard people say. Our community is not here for your entertainment. Don't stare. Don't point. Don't snicker between you and your friends. It's just plain rude.

6. Be very mindful of who you photograph (or just leave your camera at home).

There are two reasons for this. One is that one of the best parts of Pride is that it's a supposed safe space for LGBTQ+ people. For some people who have either unaccepting families or unfriendly workplaces, it might be a rare occasion where they don't have to hide who they are, and that can be a particularly important experience for trans people. People with professional jobs are probably not going to be super excited about pictures of them at a Pride party wearing nothing but a g-string and rainbow body paint making their rounds on a stranger's social media page.

The second reason is a basic matter of respect. Yes, you could argue that much of Pride takes place in public spaces, and you legally have free-reign to photograph the event —but it is generally common courtesy to ask a stranger before you take a photograph of them. It's an acknowledgement of their humanity and of their personal agency, issues at the very core of Pride. Many people will be happy to take pictures with you, or to let you photograph them, but getting consent shows that you respect the space and those attending the event.

7. Don't speculate on the genders of other people attending Pride.

Pretty much all heteronormative expectations about gender presentation go out the window at Pride. You'll likely see cisgender gay folks of a wide variety of identities, drag performers of dizzying varieties, and trans folks, both binary and non-binary identified. That's something that's often new to people from outside the community, and it can be tempting to "figure out" what the gender identity — or birth-assigned gender — of the various revelers.

However, this turns people's presentation and gender identity into a spectacle and a game, which is incredibly disrespectful. Again, Pride is a rare opportunity for many of us to relax our worries about how we're being perceived. For trans people in particular, this kind of thing can be incredibly hurtful.

8. Don't panic or get upset if someone hits on you.

While Pride is more about celebration and visibility than it is about hooking up, it's still a pretty common place for queer and trans folks to meet one another, so a fair amount of flirting tends to happen. Yes, we're all aware that not everyone at Pride is going to share our orientation, but it's one of the rare times when there's a substantial likelihood that a person who catches your eye is also queer. Cis straight folks are the minority at Pride, and getting hit on or checked out by someone of your own gender is just something you should be prepared for. Same goes for getting flirted with or checked out by a trans person.

Oh, and while we're on the subject, don't have a major panic attack if you have attraction to a trans person. If you're a straight lady and you're attracted to a trans guy because he's hot: Congratulations, you're probably still straight. Same goes for straight dudes attracted to trans women.

9. Don't treat Pride like a meat market to get your personal fantasies fulfilled.

Even worse, don't be the person who asks random couples at Pride if you can watch them have sex because it's something you've always fantasized about. Believe it or not, most queer women do not find this at all flattering. Our sexuality does not exist for your enjoyment. This same point applies for people who harbor any number of specific fantasies about trans people (particularly trans women). Trans people are not walking sex toys, and Pride is not your one stop shop for living out your fantasies.

10. Make donations to the organizations that host the event.

In the vast majority of cases, the bulk of Pride festivities are free. Pride events are also often a fairly massive undertaking, with planning beginning six months to a year in advance. Much of that planning and organization is largely done by a group of volunteers, and the expenses paid through partnerships with community LGBTQ+ organizations. These orgs depend on donations to continue to provide vital services to LGBTQ+ people, as well as to continue to put on Pride every year. A few dollars in donations from people who attend go a long way in ensuring they can continue to happen every year.

More like this
The 19 Best Tweets & Memes About Bisexual Awareness Week
By Lexi Inks
An Honest Review of MeUndies Boxers, According To A Non-Binary Person
By Megan Lasher
Pro Footballer Zander Murray Is "Blown Away" By Support After Coming Out
By Sam Ramsden
The Spiritual Meaning Of Angel Number 000, Explained
By Kristine Fellizar
Get Even More From Bustle — Sign Up For The Newsletter