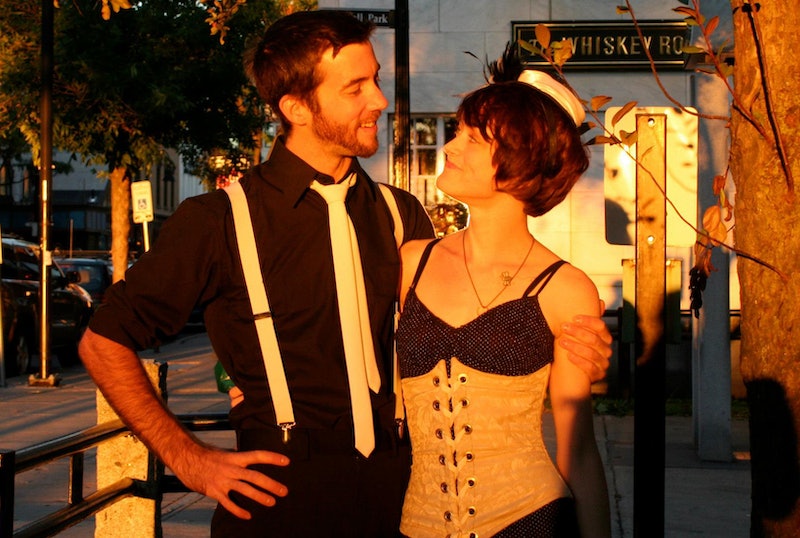 I came out as poly in 2010, after over six years of practicing various forms of ethical non-monogamy in between ill-advised stints of monogamy I would agree to when I was swooning with new relationship energy. Since then, I've been better about staying true to myself (at least when it comes to poly), and it's paid off — I currently have three wonderful, solid relationships. I'm open about being poly the same way that I've always been open about being queer: if it comes up naturally, I share, if not, I don't.

Because we live in a culture where mentioning your partner in small talk is the norm, it comes up more often than not. Usually once I've mentioned a "boyfriend" and a "girlfriend" to the same person, they’ll look confused or just outright ask, and I always offer a simple and brief explanation that I’m poly and have multiple long-term partners. Along with the “huh?!” look I get from a lot of folk, the questions they ask and the responses they have indicate some pretty bizarre ideas about poly couples.

A lot of the myths about poly couples are rooted in myths about polyamory itself — such as that it’s all about the sex and that polyamory is unnatural — but there are a few extra myths surrounding couplehood that don’t come up for solo poly folk. Some of these myths are genuinely harmful, and others are just annoying, but understanding the truth behind them is important regardless of whether you're mono or poly. But first, check out the latest episode of Bustle's sex and relationships podcast "I Want It That Way":

Myth #1: If It’s An M/F Couple, It Was The Man That Pushed For An Open Relationship

Because we’re trained to think that men always want sex and that women aren’t down for sweaty fun — and because folk equate “poly” with “sex” — people automatically assume that men are always the ones to push for an open relationship if it’s man-woman couple. Turns out though, women are twice as likely as men to suggest an open relationship, which squares with my experience: I've always been the person to insist on it.

Myth #2: If There Are Multiple Couples, There Is A "Real" One

Despite the fact that I am part of three different "couple" arrangements, the only one that people treat as the "real" one is my relationship with my male partner. A lot of this goes back to heteronormativity, and the idea that lesbians can't have "real" sex, and is partially because we happen to live together. For poly couples, all of their relationships are real — regardless of who they live with or what they're packin' downstairs.

Myth #3: We Must Be Unicorn Hunters

Since I began living with one of my partners, the constant assumption is that he and I are unicorn hunting — that is, trying to find a "hot bi babe" to "complete" our "family." Blech, no thanks. While this particularly plagues straight couples, plenty of queer poly couples face this myth, too. It makes sense why — lot of couples go through a unicorn hunting stage when they first open up — but most veteran poly folk know better.

Myth #4: Having A Nesting Partner Means You Practice Hierarchical Poly

Because I live with one of my partners, people automatically assume that he's my primary partner — that is, that I hold him and our relationship above others, which means, necessarily, that any of my other relationships will be "secondary." Secondary partners are often put in the position of having their feelings and needs ignored or deemed irrelevant, and have very little control over the situation. While some poly couples do practice hierarchical poly, plenty of us don't, and consider our relationships equal in importance. It'd be great to see OkCupid acknowledge that, too.

First of all: people are not objects to be shared. Period. But also, no. Not everyone who is poly is bi, and my partners and I have pretty different taste in people, for the most part. Sometimes there's some overlap, because poly communities are fairly small, and sometimes, when the stars magically align, a triad situation even occurs — but sharing all of our partners? Not a thing for most poly folk, except the unicorn-hunting types.

Myth #6: We Aren’t Serious/Committed to Each Other

Some parents are particularly fond of the idea that poly couples will grow out of it and settle down one day, or that their child will change their mind when they meet the "right person." Personally, I have met the right person — there's just more than one of them — and I've never had any intentions of "settling down," anyway. But plenty of poly people settle down, cohabitate, have families, and stay poly for the long haul.

Myth #8: We're Trying To Replace Each Other

Clearly the only reason anyone would agree to be poly is if they aren't happy together anymore, and they are trying to painlessly and seamlessly move on to a new relationship, right? While that does happen, I can say with certainty that I can never imagine trying to replace any of my partners — part of being poly is recognizing that people aren't interchangeable.