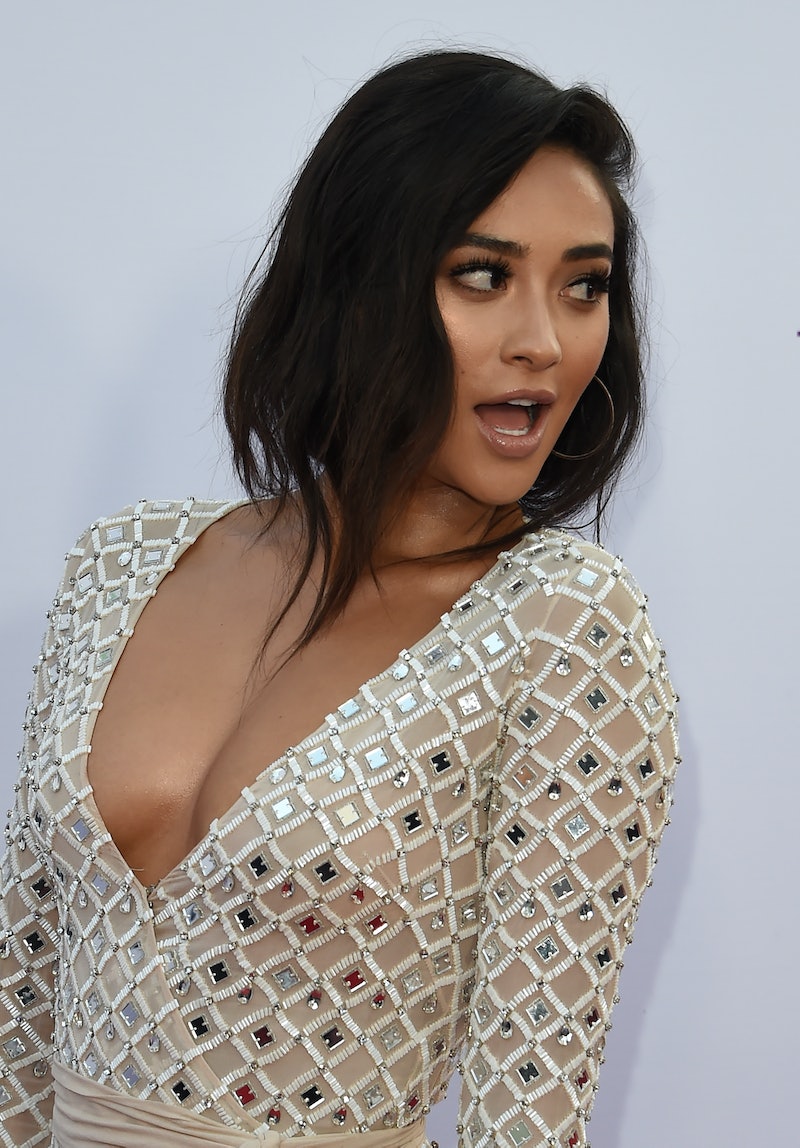 If you try to tell me that you haven't been anxious AF about the Pretty Little Liars Season 7 premiere well, you're a liar. Season 6 left us with Hanna's life hanging in the balance and each Season 7 promo was crazier than the next. But, on top of the very big possibility that the Liars will kill someone this season, we also know that a slew of old faces — including Noel Kahn and Jason DiLaurentis — are returning to Rosewood in Season 7. PLL star Shay Mitchell caught up with Bustle at the launch of Delightways, a new travel app by Sanpellegrino, and teased what she calls "the season of reunion," what will happen when Paige and Emily reunite on PLL Season 7, and whether or not Sara Harvey is actually as evil as we think.

"Time has passed and I think that both of the girls have had more life experiences since being in high school and so it’s going to be really interesting," Mitchell says about Paige returning to Rosewood in Season 7, "They were together in California and we don’t really know what happened or what took place to have them not be together when Emily came back." Fans learned that Emily dropped out of college and was donating her eggs for money after her father's death in Season 6, but PLL never revealed exactly what happened between Emily and Paige after they rekindled their romance in California.

"I think it’s going to be interesting to have people find out more of the back story with that and just kind of how Emily and Paige handle [things] in the new Rosewood," Mitchell says. But what does that mean for Emison?

It feels like Mitchell, I. Marlene King, and Sasha Pieterse have been teasing Emison since Ali returned to Rosewood, much to fans' frustration. "Whatever happens with Ali is going to weigh heavy on her shoulders," Mitchell says of Emily in Season 7, "Emily is the one to kind of drop her off and be like 'See you later.' You know?" But, all guilt aside, it doesn't seem like Paige's return is going to change Emily's feeling for Alison. "Emily will always have a soft spot for Ali," Mitchell says, "She’s always looking out for her."

Emison feels aside, however, Season 7 seems like it'll have Emily and the rest of the Liars looking out for more than just Ali. First, there's the matter of what they're burying — or digging up — in that promo that has Emily near tears. Mitchell teases that Emily may be more connected to whatever the girls are up to in Season 7 than the rest of her friends.

"I think that Emily is always the logical one that’s always going to ask questions and be like is this really the right thing to do? I am kind of similar to Emily in that way," the actress says, "She is really just asking herself if they are doing the right thing, whatever it is that they are digging or burying." But our theories that it might be Sara Harvey that the girls are burying may not be correct.

"It’s going to be really interesting seeing who Sara ends up getting close to in Rosewood," Mitchell says — especially with so many familiar, connected faces returning to Rosewood this season. "It’s interesting to see how Noel being back, Jenna being back, how all of them are gonna kind of mesh with one and other and why they’re coming back to Rosewood," Mitchell says. Let’s hope that when those characters return to Rosewood in Season 7, they bring some answers with them.

More like this
The 'PLL: Original Sin' Creators Say A’s Identity Will Be “Very Clear” By The Season Finale
By Alyssa Lapid
Every Horror Movie Reference In The 'PLL: Original Sin' Premiere
By Alyssa Lapid
Louise & Mercedes’ Relationship Is “A Little On And Off” After 'FBoy Island'
By Kadin Burnett
'Yellowjackets' Just Announced Who’s Playing Adult Van & It’s Perfect
By Gretchen Smail
Get Even More From Bustle — Sign Up For The Newsletter