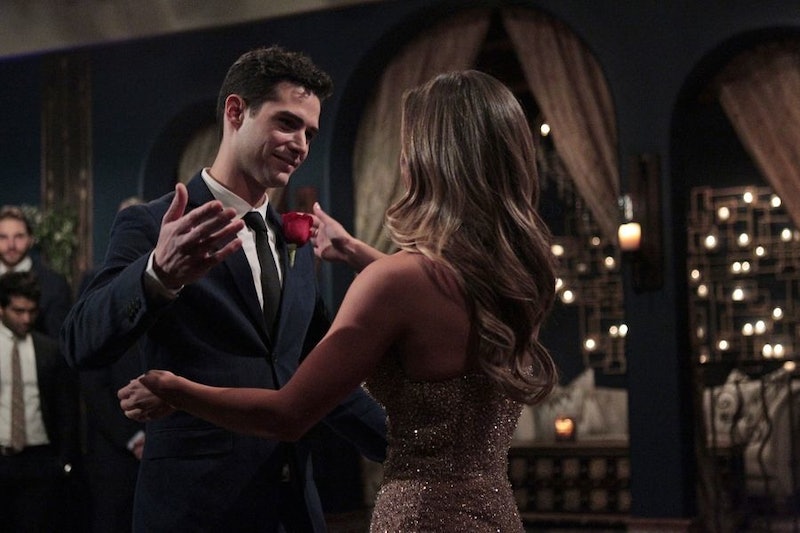 Listen, you guys, I don't really mind what kind of drama goes down on The Bachelorette this season as long as nobody harms even one hair on the chinny chin chin of my fave Wells. In fact, so concerned am I for his welfare that when he looked hella tired on last night's episode, I decided to write a fan fiction about Wells from The Bachelorette to make myself feel better about it. (No, YOU'RE overstepping the bounds of professionalism and making this weird for everyone!)

To be clear, as concerned as social media was about our sweet internet prince Wells and his sleepy eyes, it doesn't take much to figure out why he was tired. A quick Google search will tell you that it takes over an hour to get from LAX from the Bachelorette mansion, and the subsequent flights to Uruguay can take anywhere between 15 and 21 hours, depending on layovers.

That being said, I prefer my version of the events, which I have chronicled in a gripping fan fiction that I fully expect to earn a Pulitzer award, among many other accolades. Without further ado, I present ...

The Chad Demon, A Riveting If Not Slightly Disturbing Fan Fiction By Someone With Too Much Time On Her Hands

And with that, Wells punted the protein powder carton into the woods. The remaining men exchanged grins. The reign of Chad was finally over.

Little did Wells know, in punting the protein powder, he awakened the demon lurking inside of it — the very same demon that had controlled Chad since day one. As its spirit silently seeped into Wells’ consciousness, selecting him as its new human host, Wells turned and left the celebration, inexplicably compelled to eat deli meat with his fingers while making direct and unflinching eye contact with someone.

Tensions soon ran amok without Chad as a common enemy, so nobody noticed Wells sitting silently in the corner, a new darkness festering in him.

“Where am I supposed to get that much human flesh, master?” Wells muttered, walking down the hall.

Wells looked at him with cold, dead eyes. “I said, how can I get on a one-on-one date faster,” he answered, continuing to wordlessly drag a weighted suitcase to the most public place he could find.

The night of the rose ceremony, the demon finally summoned him in his quarters. “Wells,” its hellion voice rumbled from within his mind. “Imagine: a world where you have one-on-one dates with JoJo. A world when you have more than four seconds of screen time looking vaguely bored while other people fight about not starting fights. A world where you can properly tie a tie around your neck before being filmed on national television. I can give you all of that, Wells … all I need you to do is threaten someone to take this outside.”

Wells stared into the void of sweet temptation. It would be so easy. Easier than accidentally finding an InTouch Weekly magazine in a highly secure set where the doors are locked from the outside. But —

“No,” said Wells, mentally wrenching himself from the demon’s grasp. “Not today, Satan. Not today.”

Later that night, when giving out the final rose, JoJo’s gaze swept over the remaining contenders. “Which one of these remaining dudes are the least likely to have been possessed by a hell demon bent on earth’s catastrophic destruction?” she mused thoughtfully. Her gaze settled finally settled on a head of curls. “Wells,” she said with a smile, “will you accept this rose?”

And with that, the demon was finally banished back to its home realm — where it will remain until the filming of Bachelor In Paradise lets it rise from the ashes, ready to claim a new soul once more.

ALSO, TO THE TEACHER WHO GAVE ME A B PLUS IN CREATIVE WRITING IN JUNIOR HIGH: HOW DO YOU LIKE ME NOW??????