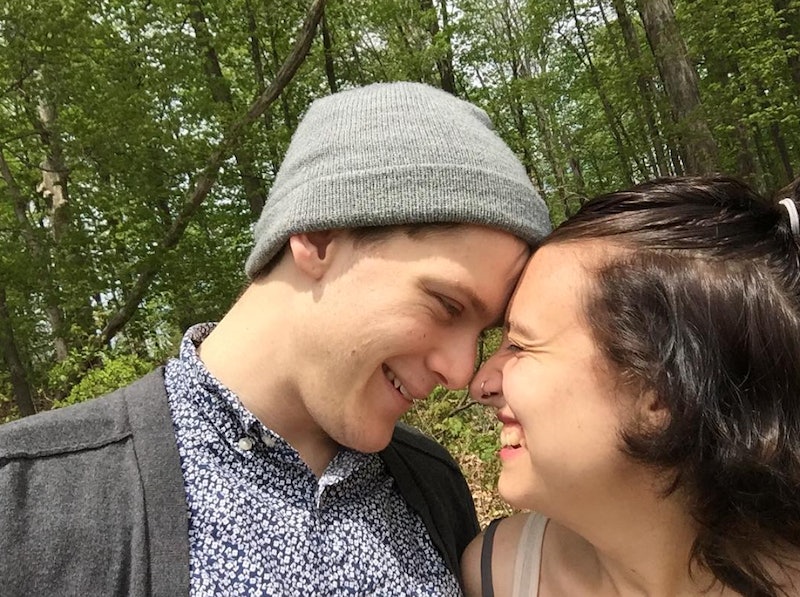 There's a lot to be said about the ways in which our society places unreasonable expectations on body hair maintenance. Masculine humans are expected to be hairier and possess the ability to grow a beard; feminine ones are regularly told to be shaved and waxed from head to toe. The way we keep (or don't keep) our body hair can thus breed a lot of stress for many people. For that reason, one's relationship with body hair often has the potential to define what one's relationship with body positivity is, at least in part.

At the dawn of my outness, before I first came to terms with my genderqueer identity both personally and publicly, my issues concerning body positivity had to do with fear of judgement over my hairy armpits and legs. As someone who was conditioned to be female and conform to traditionally feminine beauty expectations, I feared breaking away from my eternally-hated shaving routine to embrace a more authentic self image.

Once I did, I certainly received a fair amount of stares and comments surrounding my bushy armpits and fuzzy legs. It still happens to this day, although I pay far less attention thanks to the fact that I've been able to come to terms with embracing my preferred image. These days, however, I have an entirely different issue concerning body hair and body positivism that wracks my mind. My concerns are still gender-based, but not limited to the female experience. My partner, assigned male at birth, feels the pressure, too.

The other day, Skylar and I were discussing our relationship with our body hair — something that hadn't been brought up in a while. Since we're both genderqueer, said relationships are pretty nuanced, differing day to day and continuously affected by our gender identity. I normally strive to embrace more of my masculinity, while Skylar aims to own their femininity in their presentation and expression of emotion. This, however, means that the way our body hair grows and appears can sometimes put us at odds with how we feel inside.

Personally, I feel that my untamed body hair is pretty pathetic. Save for my thick and glorious pubes, I reject how thin and light the hair on my body tends to be. I envy friends with thick, dark leg hair: A look that screams so much masculinity in my eyes. My own leg hair is dirty blonde, and so thin that people often tell me they hardly notice there's anything on my legs at all. I assume such commentary is meant as a compliment, particularly when concerning friends who are very against letting their own body hair grow out. But it doesn't feel like a compliment. My thin armpit hair, my ever-so-light leg hair, and the long strips on my calves that seem to be perpetually hairless, make me feel feminine. And as someone who prioritizes masculinity and oftentimes fantasizes about having a penis, this isn't too well-received.

My partner has had comparable struggles. When they were younger, they were extremely self-conscious of their hairy legs, chest, and face, since they were taught to perceive those characteristics as inherently masculine. Luckily, their perspective has shifted some in the past couple of years. "I used to feel very negative about it," they tell me. "I used to hate the hair on my legs and my face. Because as an AMAB genderqueer person, I felt that my hair overshadowed my femininity. And I felt less feminine because of it."

Slowly, however, they grew accustomed to separating gender from traits such as body hair, and came to the conclusion that hair is just hair. "Over time, I was able to un-gender my feelings towards hair since [it] is something everyone has. It’s not feminine or masculine. Just some people have more or thicker hair then others."

Though this is true, it's not always easy to believe. One area of their body that Skylar still struggles with is their face, since facial hair is something especially difficult to separate from a specific gender. "I don’t feel as if I can’t be feminine when I have stubble," they tell me. "But when It starts growing to like beard length, it really prevents me from freely embracing my femininity."

As an actor, this is something Skylar has and will continue to struggle with based on certain productions' appearance requirements. In one play they starred in this past year, they were obligated to a grow a full beard. Despite all the positive (but completely masculine-based) feedback they received from family and colleagues, Skylar absolutely hated the experience of living with a beard. The night of the production's last show, they immediately retreated to their bathroom to shave the whole thing off before applying makeup for the first time in months. And I'll never forget how elated and liberated they were.

Even the act of shaving is stressful to them, something I hadn't discovered until recently when I was watching them shave in our bathroom. I said something along the lines of, "Watching this is super comforting and reminds me of when I would watch my dad and my grandpa shave. It's like a classically masculine thing in a good way," to which they responded with, "This actually feels feminine to me since I'm shaving."

I felt guilty about unintentionally being insensitive to their gender-based motives, not realizing how emotionally-charged shaving really is for them. "I wish I didn’t have to shave my face," they tell me in a text. "It’s the one place on my body that I still feel like my femininity is being blocked when I have hair in that area."

For similarly gender-based reasoning, the very act of shaving is stressful to me. It's not something I do often (I don't even own my own razor), but come swimsuit season, I normally clean up my bikini line to repel unwanted attention. As I shave my bikini line, however, I always feel horrible — like I'm shedding some semblance of masculinity, and taking part in an inherently female activity that I have no interest in being a part of. It's the pressures of society, as with Skylar and their beard, that keep me from acting on my own accord.

I'm sure we've both thought of permanent solutions. Perhaps Skylar can get their face laser-treated; perhaps I can use something that will thicken and darken my fuzzy bits. The truth is, though, we're both incredibly determined to come to terms with what we've already got. As Skylar mentions, we will both continue to work towards un-gendering body hair each day. Because regardless of whether we're hairy or hairless by design, neither of these characteristics should ultimately define or shape our wonderfully fluid gender identities.