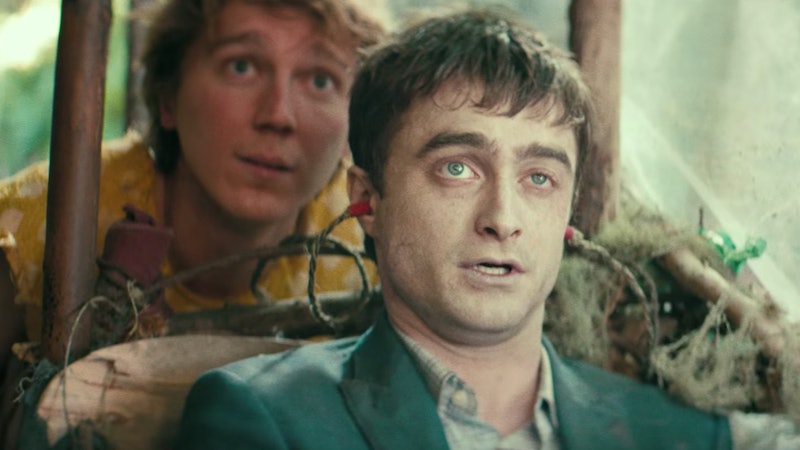 Daniel Radcliffe's newest role is about as far away from playing Harry Potter as the actor could possibly get. In his new movie Swiss Army Man, Radcliffe plays dead — literally — officially shedding his image as "the boy who lived." Radcliffe's character, ironically called Manny, is a corpse that is brought to life, at least in the mind of Hank (Paul Dano), the castaway who finds him and keeps him as his companion. Far from the kid-friendly wizarding franchise that launched Radcliffe's career, Swiss Army Man caused a huge amount of controversial buzz when it debuted at the Sundance Film Festival in January, and quickly became known as the Daniel Radcliffe farting corpse movie. But the movie is more than that. In fact, Swiss Army Man shows a whole new side of Radcliffe for fans to see.

Since ending his run as Harry Potter, Radcliffe has starred in a wide range of projects. He's done Broadway musicals (How to Succeed In Business Without Even Trying), horror films (The Woman in Black), romantic comedies (What If), and even fantasy (Victor Frankenstein). And yet, none of those roles has ever required him to get a prosthetic mold of his butt. Oddly enough, that is one of the many things Radcliffe can now cross off his bucket list thanks to Swiss Army Man, as he explained during an appearance on Late Night with Seth Meyers . "There's not a huge amount of dignity," Radcliffe said of the process to make a prosthetic butt.

Other than the prosthetics experience, Swiss Army Man provided more firsts for Radcliffe, who had never before played a corpse. For the star, the idea of playing a dead body presented him with a brand new acting challenge: how does one pretend to be dead? "I loved the physical challenge of it. I loved seeing how painful I could make things look," Radcliffe told The Hollywood Reporter . As a multi-purpose tool, Manny was to be put in many different, unnatural positions throughout the film, and filmmakers Daniel Scheinert and Dan Kwan — known as the Daniels — originally assumed they would do a lot of work with a mannequin and special effects. What they found, however, was that Radcliffe didn't need much help to become a convincing corpse. "We cast Daniel 'cause we were huge fans of his acting, but we had no idea he was so good at being a dead body, too," Scheinert told a crowd at Sundance. "He's incredible at not blinking, not breathing, he can make one of his eyes go lazy on command, his skin is just naturally pretty pale," Scheinert added.

Swiss Army Man has been divisive among critics, but one thing is clear: it's a movie unlike any other. And, even though Radcliffe will always be Harry Potter, it's good to know he can still play a wide range of characters, even dead, farting corpses.