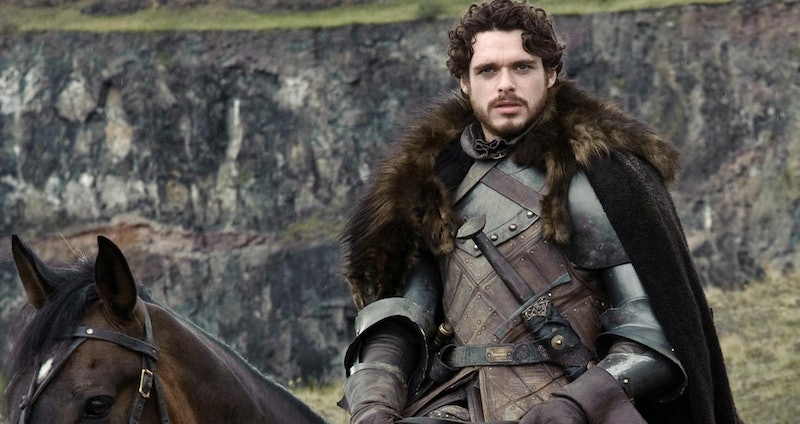 This might just be some idle dreaming, wishing, and waiting, but I really want Robb Stark back right now on Game of Thrones. I mean, it's not that far-fetched. Jon Snow came back from the dead, Beric Dondarrion came back from the dead a few times, and Jaqen H'ghar has some sort of staying power. All the cool kids are doing it. The universe of Game of Thrones is one with magic in it, so it's totally, maybe a possibility that Robb Stark's resurrection could go down. Hopefully.

War has been hell for all the families, but the Stark family has been torn apart. They've straight up been through the Seven Hells. These poor children, who were once protected by Direwolves, could really use a victory. And doesn't it just feel like a victory for the Starks is a victory for us? I know how good I felt after Jon Snow and Sansa were reunited, so I can't even begin to imagine how I'd feel if Sansa and Jon's reunion is followed by a Sansa, Jon, and Robb reunion. (And, hey, let's just throw in Bran and Arya here, too, because I'm daydreaming here, and a complete family meet-up would be so wonderful.)

But, if you're still not convinced, here are some solid reasons why having Robb Stark back would be the best thing ever.

1. A Reunion Would Be So Nice

We could have the feeling of joy we had when Jon and Sansa reunited. And remember the hopefulness we all felt when it seemed Jon was going to grab Rickon off the ground and there was going to be another wonderful reunion? I know it wasn't just me who felt that.

2. The Starks Are On The Vengeance Path, So Let's Keep It Up

Taking out Ramsay was the sweetest TV death I've ever seen, but it would be even sweeter if Robb Stark was able to get in on the fun. There's a theory going around that Robb Stark is a character from the books who hasn't shown up yet in the series, a certain "Stoneheart" whose whole shtick is vengeance. While the character was, in fact, Lady Catelyn Stark in the books, Bustle writer Alaina Urquhart-White theorized that Robb Stark would take the role as a "Lord Stoneheart." I, for one, would love that.

3. Everybody Keeps Talking About Him

This season, we've been hearing a lot of things like "why would I support you when your brother screwed me over." Why would they keep mentioning Robb all the time if he wasn't about to get reincarnated? It's not fair to keep reminding us of his death like this. It hurts otherwise.

4. It's Time For The Gods Of The North To Show Their Stuff

All the other gods are resurrecting people. Get with it, gods of the North.

Jon Snow's man bun is all well and good, but we really need some dark and curly manes back in the game. All that amazing hair is the reason the Starks are the most attractive of the families, and one of the many reasons we love them so much.

6. The Starks Need A Win

Doesn't it feel like things are wrapping up a bit? The bad guys are dying, the Greyjoys and Targaryens are coming together, and Cersei is about to do something crazy. It stands to reason that, now, the good guys should get a win. Like, preferably a return to their lands and the reincarnation of all their family members.

7. Sansa And Jon Are Floundering A Bit

Sure, these two have both proven themselves to be people who can take care of themselves (albeit with many mistakes on their parts), but they still don't seem to understand how to work together. They need an older brother figure to help them out — one who, just like them, has been forced to learn from his mistakes the hard way.

8. If You Build It, They Will Come

The Starks just got their home castle back. Now, it's time for all the Starks to come back and live in Winterfell again. It only makes sense.

9. Nobody Wants Littlefinger To Be Warden Of The North

Nobody would cheer "the king in the North" about Littlefinger. I'm pretty sure the only guy who would get that treatment again — especially if he reincarnated — would be Robb Stark. I bet the families of the North would forgive Robb for screwing up by not marrying a Frey and getting everybody killed...

There really hasn't been enough of this sort of thing to distract us from all the intense stabbings and plotting and whatnot. And, in his heyday, Robb was the King of not only the North, but also our hearts.

11. He Would Totally Get Along With Margaery Tyrell

As Bustle writer Maura O' Malley pointed out, a Margaery Tyrell/Robb Stark union would be a dream team. Westeros needs everybody to take down the White Walkers, and that includes all the families and the poor.

12. Melisandre Needs To Be Taken Back Down A Notch

I never like it when Melisandre gets too confident. And we can only assume she's feeling super confident now that she's brought Jon back and he won against Ramsay. If someone she supposedly killed with a leech and the blood of a Baratheon bastard comes back, it would put her in her place.

Robb is like that lovable idiot every sitcom needs to keep everyone from losing their minds. Sure, he uses his heart more than his brain. Sure, he could be a bit snarky to his mother sometimes. But I loved him for the lightheartedness he would occasionally bring to the table — more lightheartedness than Jon "Broody McBrooderson" Snow.

Come on, Northern Gods. Let's get some magic going, and get this done.