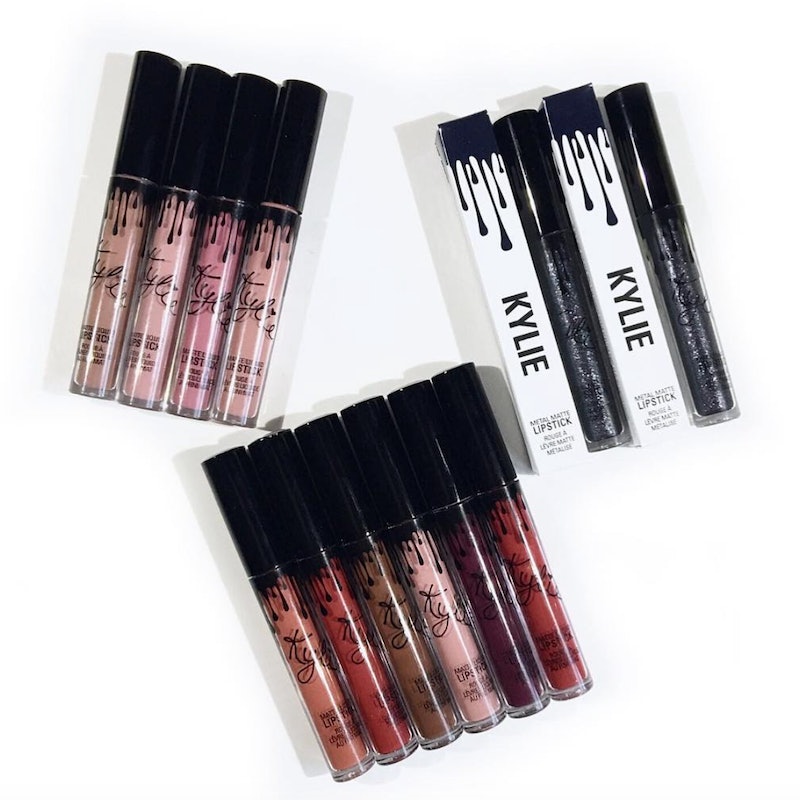 OMG you guys! Kylie Jenner immediately followed up the visual debut of her blue Kylie Lip Kits — the baby blue Skylie and the denim-inspired Freedom, which appear to be limited edition— with monster news. Jenner revealed she is releasing three new Lip Kit shades for summer. She confirmed news of new Lip Kit hues via her favorite form of social media — Snapchat. She teased three swatches on the inside of her wrist, obscured by the grey filter. Ack! Currently, the Lip Kits kover the entire shade spectrum, from nudes and neutrals to pinks to reds to blacks to blues. What shades will she tackle next? We'll have to wait and see. But when is Jenner dropping her three new Lip Kit shades?

She posted that these Lip Kit colors will be here in July. She didn't confirm an exact date but at least we know the month in which to expect them. Since she specifically described them as summer shades in her Snap, we can assume they will arrive earlier in the month, so that fans can get them in time to wear them through both July and August. We can also speculate about the shades, which look light and dark, based on the greyscaled swatches.

Observe my screen grab of her Jenner's Snapchat reveal that more Lip Kits will enter our lives next month.

July can't get here fast enough for Lip Kit lovers and koveteurs! They remain the most desired mattes on the market, since the KLKs sell out every time a restock happens. Expect plenty of info about these babies to be shared via social media in the coming days.

Oh look! It's a biz plan. Perhaps the peach color in the logo is a hint about one of the Summer 2016 colors? Could be!

You can attempt to glean info from the greyed out photo. It looks like light, mid, and dark toned Lip Kits are on the way. We don't know if these will be "exclusive" or "limited edition," which are terms that have been applied to Dead of Knight, KyMajesty, Skylie, and Freedom. But let's not get too far ahead of ourselves.

First, we need Jenner to be generous and share a shot of the actual colors sans a filter. Then we can get into the status of the summer colors and whether or not they will be seasonal or permanent additions.

As for Skylie and Freedom? The blue Lip Kits will be available on Friday, June 24 so that customers can have them for Fourth of July and all accompanying celebrations.