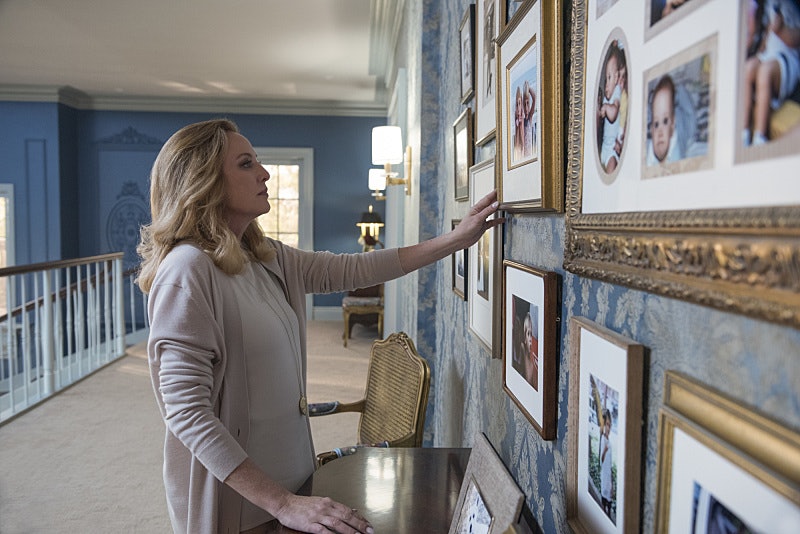 This Wednesday, CBS will bring something revolutionary to your television screen: a story about a serial killer in the network's new summer drama American Gothic . OK, so serial killer sagas aren't exactly unheard of in the world of TV; in fact, the genre has been a staple of the medium practically as long as it has existed. We've seen TV killers that are charming (Dexter) and TV killers that are terrifying (Hannibal), we've seen TV killers that are based on true stories (Aquarius), ones that are based on popular books or films (Bates Motel), and others that are entirely original (Twin Peaks). So which sort is the murderer at the heart of American Gothic? Is the "Silver Bells Killer" real?

Created by The Good Wife writer Corinne Brinkerhoff and produced by A Million Little Pieces author James Frey, American Gothic "centers on a prominent Boston family reeling in the wake of the chilling discovery that someone in their midst is linked to an infamous string of murders," according to the show's official website. "As shocking secrets from the past and present are revealed, their mounting suspicion and paranoia that one of them is a killer threatens to tear the family apart." The killer in question was given the nickname the "Silver Bells Killer" because of the small handbells he left next to the bodies of each of his victims.

There may be no example in reality of a serial killer with a thing for Christmas-themed calling cards — but that doesn't mean the "Silver Bells Killer" doesn't have some real-life inspiration. In a recent interview with Entertainment Weekly, Brinkerhoff stated that American Gothic 's fictional mystery "reminded me of a case in Kansas where I grew up, which has always stuck with me."

This serial killer who had eluded police for 15 years and gone dormant, they finally caught him and it turned out that he was a family man with a wife and two kids, he was deacon at his church and he was a boy scout leader. I was not interested at all in the gruesome details of his crimes, but I was fascinated in a morbid way about what happens after that? What happens to that family?

Although Brinkerhoff doesn't outright name the real-life serial killer who inspired her story, it's very likely that she was talking about Dennis Rader, aka the BTK Killer (for bind, torture, kill). In 2005, Rader plead guilty to killing 10 people in Kansas between 1974 and 1991 and was sentenced to at least 175 years in jail with no possibility of parole, as reported by NBC.

In its report of Rader's arrest, The Los Angeles Times described the 59-year-old killer as "married with two grown children … a church-going family man, a Cub Scout leader, [and] a dog-catcher for the trim suburb of Park City," which is "a working-class suburb of ranch homes and fast-food restaurants about 10 minutes north of downtown Wichita." The report paints a complex portrait of the man, saying that while "some of his neighbors said he was friendly — and he was well-respected enough to serve as president of his church council — others called him mean and arrogant."

Although the setting has been moved from suburban Kansas to an upscale Boston neighborhood, it's easy to see how American Gothic was inspired by the idea of a well-respected family man turning out to be a sadistic serial killer. In fact, it's such a compelling launching point for a story that it's not surprising to learn that American Gothic isn't the first time Rader's life inspired a work of fiction. Stephen King's short story "A Good Marriage," published in the 2010 collection Full Dark, No Stars, was also inspired by the real-life events. (The story was subsequently adapted into a 2014 film starring Joan Allen.)

Thomas Harris also found inspiration for his 1981 novel Red Dragon — specifically for the character Francis Dolarhyde, the serial killer dubbed "The Tooth Fairy" by the press — in the BTK murders, back when they were still unsolved and underway, after a visit to the FBI's Behavioral Science Unit.

But just because American Gothic may have been inspired by Dennis Rader doesn't mean that Brinkerhoff is just setting out to tell the story of the man's life. "In that case, they knew definitively who it was and what had happened," she explained to EW. "But what if you took that framework and there’s more of a mystery about what really happened, who knew what, what happened when, and who’s holding what piece of the secret? I was interested, on a character level, in the psychological ramifications of that kind of suspicion, and what the rest of your life looks like once that suspicion is out in the world."