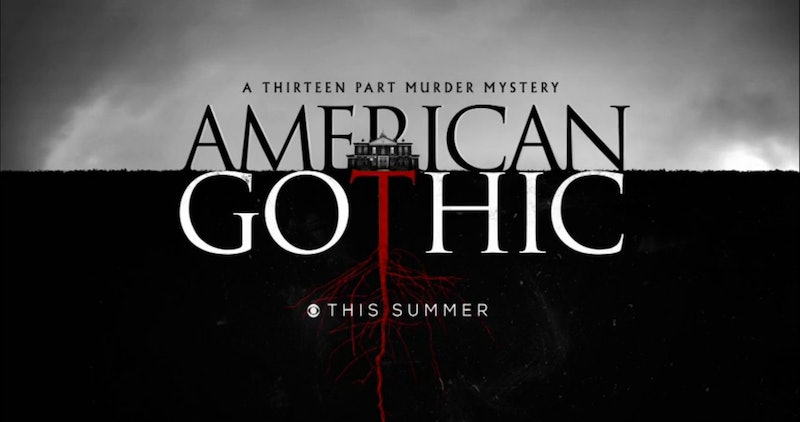 While Hollywood works its way through a seemingly indefatigable trend of superhero movies, the television landscape has found itself in the grips of an equally unshakable fad: crime. The next show to get in on the crime craze is CBS' American Gothic , hitting the airwaves this summer in what's described as a "13-part murder mystery." If you find yourself in withdrawal after the terrific FX series The People V. O.J. Simpson: American Crime Story earlier this year, then the first official American Gothic trailer is here to prove that it will definitely satisfy your crime addiction post-ACS.

Created by Corinne Brinkerhoff (The Good Wife) and James Frey (yes, he of the Million Little Pieces Oprah scandal), Gothic stars Oscar nominee Virginia Madsen (Sideways) as the matriarch of a Boston family torn apart when it's revealed that one of them may have been involved in a string of murders in the area. Juliet Rylance (The Knick), Justin Chatwin (Shameless), and Antony Starr (Banshee) play her children… but which of them is a serial killer? That's the question that American Gothic promises to answer; but can you figure it out for yourself before the finale?

Of course, crime isn't really anything new to television; police procedurals have been a staple of the medium practically since it was invented. But what is new is the format of today's hottest crime shows, which have been trading in the 22-episodes-per-season procedural nature of years past for shorter bursts of 13 self-contained episodes (or fewer; The People V. O.J. Simpson only ran for a brief 10). This means that viewers can enter the series expecting closure and a satisfying solution, rather than the kind of cliffhanger shenanigans pulled by The Killing over on AMC five years ago.

The anthological crime phenomenon was undoubtedly started by the podcast Serial, and has since found a home on cable (the aforementioned American Crime Story), broadcast (ABC's American Crime), and streaming (Netflix's Making A Murderer) — and is showing no signs of slowing down. After American Gothic airs this summer, the following months will bring NBC's Law & Order: True Crime , which will focus on one real-life case in each eight-episode season; ABC's The Jury , which the network describes as "Serial meets 12 Angry Men"; CBS' as-yet-untitled unscripted true-crime anthology series; Investigation Discovery's controversial docu-series Hard Evidence: O.J. Is Innocent ; a new season of ABC's Secrets & Lies; a new season of American Crime Story; and even a TV adaptation of Serial itself. (The fate of ABC's anthology series American Crime has yet to be decided.)

I hope you're ready to be watching a lot of mysteries, because — like superheroes in the cinema — they're going to be increasingly difficult to get away from in the months and years ahead.