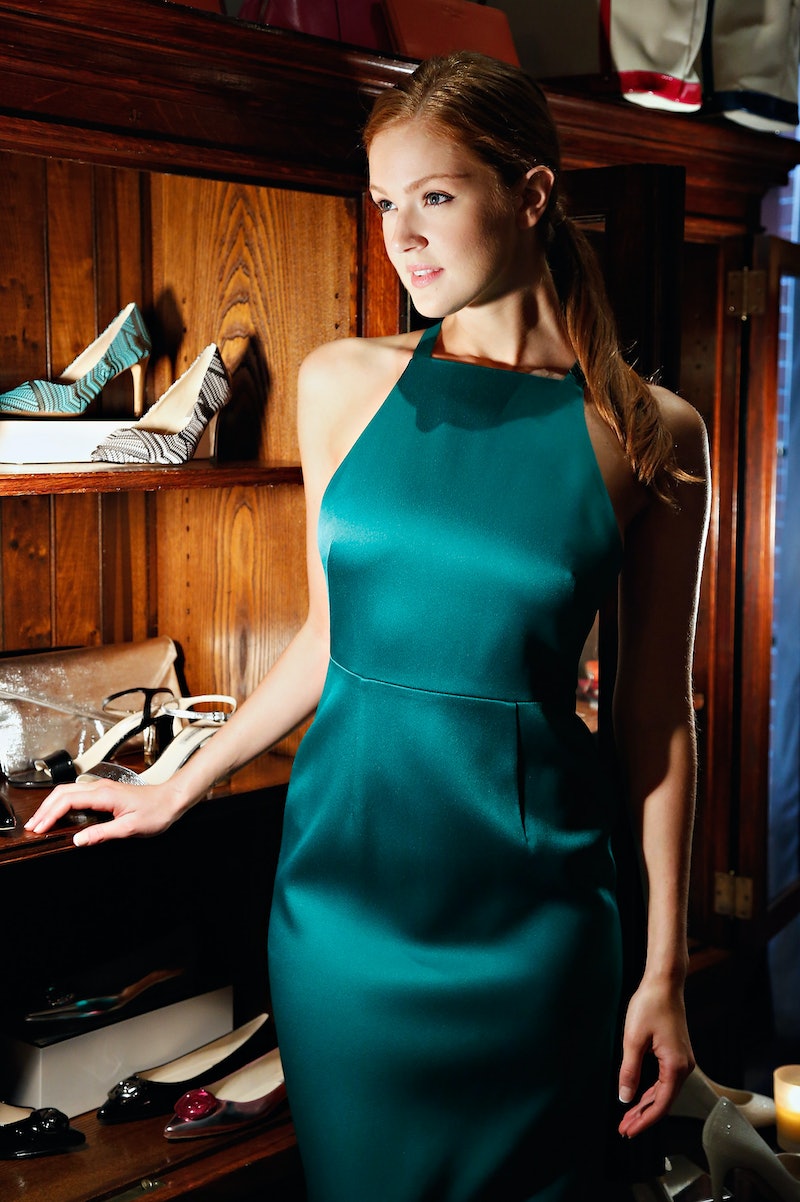 Get ready for Gotham City to get a little more crowded. Gotham Season 3 will welcome a new addition to its cast in the form of statuesque redhead Maggie Geha, who will be taking the role of grown-up Poison Ivy. According to the character description: “Following an encounter with a monster from Indian Hill, Ivy Pepper finds herself reborn, and one step closer to the DC villain she is destined to become: Poison Ivy. Now a 19-year-old woman who’s harnessed the full power of her charms, she sets her sights on Bruce Wayne.” But who is Maggie Geha, and what exactly do we know about her?

This marks a distinct change for the cast, since previously Poison Ivy was played by Clare Foley, who was supposed to be around the same age as Bruce Wayne (David Mazouz) and Selina Kyle (Camren Bicondova). Given that Mazouz is just 15 years old and looks it, let's hope the "full power of [Poison Ivy's] charms" aren't too, ahem, physical.

I've done a deep delve into her social media presence to find out all the best things about the Ted 2 actress — and believe me, there's a lot. So here's why the upcoming Gotham star is going to be the best thing on your small screen.

1. She Loves Cats As Much As You Do

2. She Does A Little Modelling On The Side

I can't relate, since every time someone brandishes a camera in my vicinity, my facial muscles seize into an automatic squint, but I'm glad Geha's got a stable way of making some dollars on the side since showbiz is such a famously fickle business.

Is there anything our girl can't do? Also, look at her cats helping her. She's basically Doctor Dolittle.

5. She's Actually Friends With Her Co-Stars

You know those stars who are all hugs and hand-holding when they're on the red carpet and never exchange a word in real life? Geha's clearly the opposite of this, actually hanging out with her fellow The Harrow actress in her downtime.

6. She's A Caring Mom To Archie

LBR: wouldn't you be too, if your cat was this cute?

Because, obviously. For the girl who can do anything, making a delicious vegan cake in the shape of a rabbit is child's play.

8. She's Not The Only Animal Lover In Her Family

Can I come too, please? Please?

10. She's Single And Enjoying It

OK, admittedly pure speculation here, but why else would her friend be avoiding c*ckblocking her if she was loved up? Also, her wingwoman is hilarious. Loving the selfie strategy and covert use of the mirror to record the moment.

If Geha is even a 10th as fun as her social media presence implies, I think Gotham City's going to be an even livelier place than usual.

More like this
'School Of Rock' Changed Joe Keery's Life Forever
By Alyssa Lapid
How Much Are The 'Schitt’s Creek' Stars Worth?
By Hugh McIntyre
‘SNL’ Finally Spoofed Nicole Kidman’s Weirdly Beloved AMC Ad & Nailed It
By Stephanie Topacio Long
Jonathan Bailey’s BTS ‘Bridgerton’ Photos Celebrate 6 Months Of “Kanthony”
By Stephanie Topacio Long
Get Even More From Bustle — Sign Up For The Newsletter