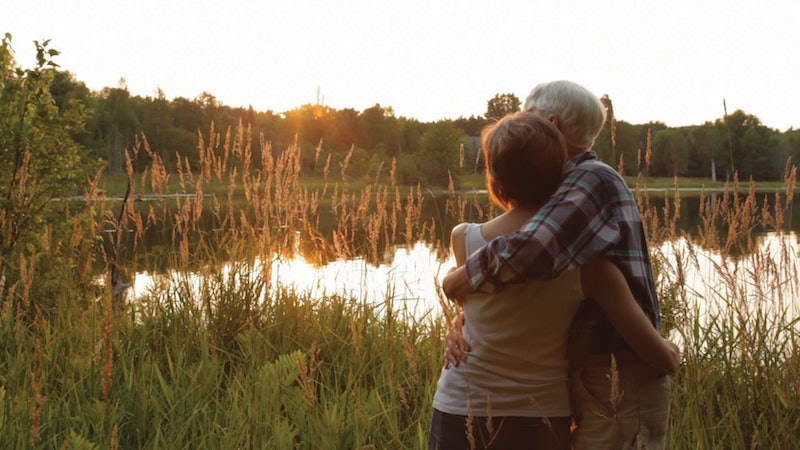 Although openly transgender people and characters are more visible than ever in contemporary media, this hasn't always been true. In the '80s and '90s, it's unlikely that shows like Transparent and Orange Is the New Black would have seen the widespread acclaim that they receive today — but the lack of media representation didn't mean transgender people didn't exist. And that's exactly what the documentary From This Day Forward by filmmaker Sharon Shattuck addresses: The deeply personal film shares Shattuck's own experience with gender fluidity during an era with much less trans visibility as one of her parents came out and transitioned.

When Shattuck was still fairly young — she was in middle school, while her sister was in elementary school — her artist father came out as transgender and changed her name to Trisha. It's not uncommon for such announcements to be followed by separation and the adoption of a new identity, and Shattuck's parents did initially announce a divorce. However, Trisha and Shattuck's heterosexual-identifying mother, Marcia, ultimately chose not to go through with the ivorce. Instead, they embarked on a balancing act together, both within the family and in their small Midwestern town, and remain happily together decades later.

With a wedding of her own in the future, Shattuck decided it was time to examine her parents' nontraditional marriage. "I feel like everyone has a story that they could tell, and this is mine — or rather, this is my family’s," Shattuck tells Bustle over email.

Although Shattuck originally planned on creating a film about other "rainbow families," as LGBTQ families are sometimes known, she continually found herself returning to her own experience. "It became clear that the story closest to my heart was the one I wanted to tell, and once Trisha gave me permission to turn the camera around, I started the long process of making this film," she writes to Bustle.

The resulting documentary is a touching look at romantic and familial love, using home videos, pictures, and family interviews to illustrate the give-and-take of Trisha's everyday life as well as the effect her gender fluidity has had on her family. Perhaps unsurprisingly, Shattuck and her sister took Trisha's transition personally as they grew up; in the film, her sister says she used to view Trisha's decision to come out when they were so young as selfish — inconsiderate of the way an openly transgender parent would affect their childhood.

"My sister and I were both very much concerned about how Trisha would affect us and our relationships with our friends and teachers. ... Before [making From This Day Forward], Trisha was open about Trisha’s gender identity, and the rest of us kind of shrugged and nodded and didn’t say much," Shattuck explains.

As she grew up and came to know other LGBTQ people, however, Shattuck made more of an effort to understand Trisha's point of view. "I found myself feeling more protective of Trisha — wanting to act as a buffer between Trisha and the harsh words and actions of wary strangers," she wrote. "I don’t know if that’s a good thing or a bad thing, ultimately, because maybe those judgmental people probably should interact with a transgender person once in a while! But I was protective, certainly, and I still am, to some extent."

Such protectiveness is certainly understandable considering the sheer amount of violence and hatred directed at the LGBTQ community, particularly transgender individuals, even today. The film references several instances of transphobia Trisha has encountered over the years, including a hospital stay in which several nurses refused to treat her because of her gender identity. Although Shattuck says such experiences often went over her head as a child, she noticed when people treated Trisha differently.

"I wasn’t that aware of the transphobia as a little kid, although I definitely noticed it in bursts. And I would notice the change in temperature and tone of, say, a checkout girl at the supermarket between the previous customer and Trisha," she tells Bustle. "It was really hard to watch, especially as I got older."

She adds that it was tempting to take more of a combative tone with her film, but she ultimately decided to focus on the positives. "This is a story about my parents’ really incredible, loving relationship, despite the challenges they’ve faced, and I tried to stay true to that spirit," she says. Later, she writes, "I think there’s still a long way to go before people in our country can accept those with differing gender identities, but hopefully we’ll continue to have more movies, more books, more TV shows that present transgender people in a loving, thoughtful way."

From This Day Forward premiered on April 10 at the Full Frame Film Festival, and it has several screenings scheduled internationally this year. The documentary will run at the IFC Center in New York June 24-30, Digital Gym in San Diego July 8-14, and Roxie in San Francisco July 15-21. To see if it's coming to your area or to book a screening, head over to From This Day Forward 's website.

More like this
The 19 Best Tweets & Memes About Bisexual Awareness Week
By Lexi Inks
Pro Footballer Zander Murray Is "Blown Away" By Support After Coming Out
By Sam Ramsden
10 Ways To Be More Empathetic To Your Partner
By Raven Ishak and Lexi Inks
Why Harry Styles & Olivia Wilde Make A Great Couple, According To Astrology
By Nina Kahn
Get Even More From Bustle — Sign Up For The Newsletter