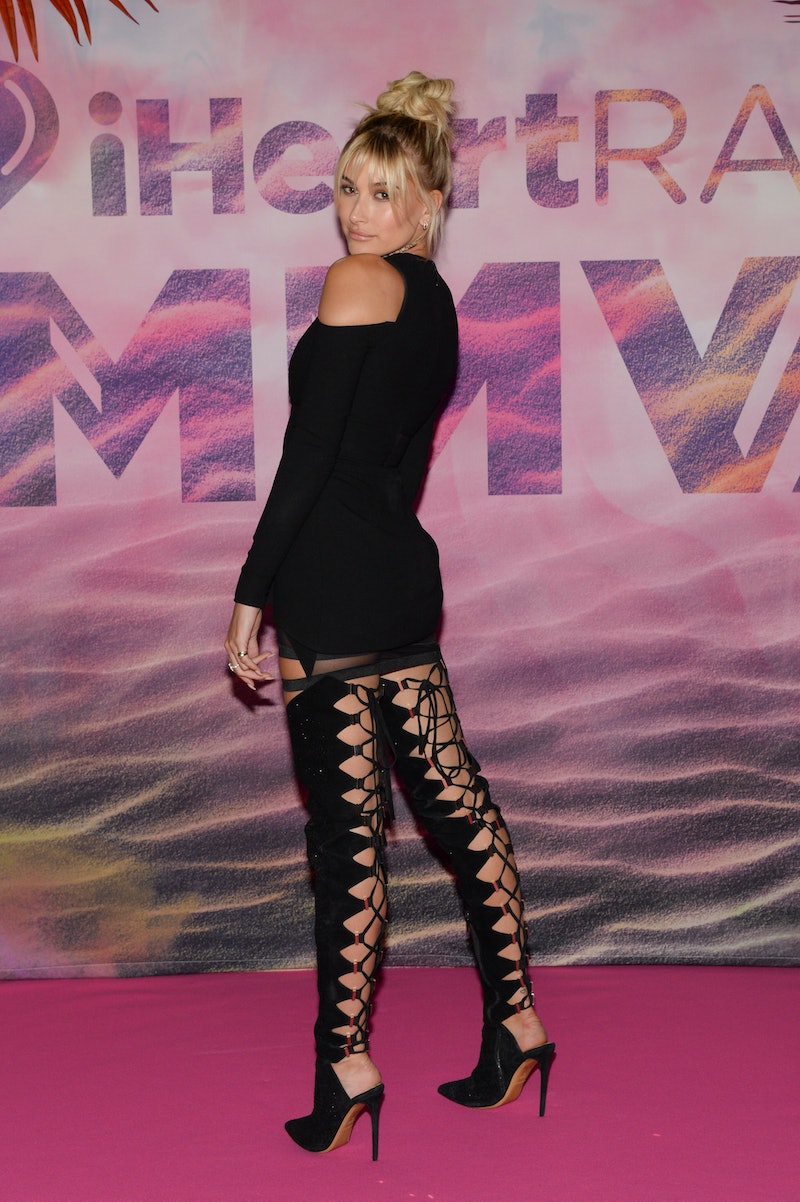 Oh, celebrities and their tattoos. They get so many so often, it has become harder and harder to keep up. Most recently, Hailey Baldwin got a new tattoo, further expanding her ever-growing collection of body art. I bet you didn't even know the model was tatted, did you? That's because she does a really good job of hiding them, plus they are all pretty small. If you are now wondering, how many tattoos does Hailey Baldwin have? I have the answer for you.

The 19-year-old hit up celebrity tattoo artist, Jon Boy, in NYC with BFF Kendall Jenner on Tuesday. Jon Boy posted a photo on Instagram of Baldwin's new ink, which consisted of the letters "P" and "R" on her left index finger, and the letters "A" and "Y" on her right index finger. The picture showed Baldwin's palms facing each other as though she was praying, bringing both index fingers together to spell the word "PRAY." Kind of clever, isn't it? Jon Boy may have posted the photo, but he wasn't the one behind the new tattoo. So who was? Jenner was actually the one who inked her BFF. Girl is multitalented.

Clearly, Baldwin is fond of body ink. Let's check out all the other places she has tattoos, shall we?

She got a tiny tat of the word "gente," which means "people" in Portuguese, which reportedly, refers to her Brazilian roots.

2. Side Of Her Wrist

It's a little hard to see, but this reads VI.X.XC., referring to the date June 10, 1990, which reportedly has something to do with her mom and dad.

3. Side Of One Finger

Hailey and her cousin Ireland got their last names, "Baldwin" tatted on the inside of their fingers.

The little "G" behind her ear is for "Georgia," to commemorate a little girl by that name who suffers from a very rare brain disorder.

5. Side Of Her Middle Finger

Baldwin and Jenner got matching broken hearts on the inside of their middle fingers.

6. Inside Of Another Finger

A tiny white dot with BFF Kendall Jenner, because friends who get inked together, stay together.

7. Inside Of Her Middle Finger

How freaking cool is this tiny little gun tat?!

This ankle tattoo reads "minas gerais," which supposedly is one of the 26 states of Brazil.