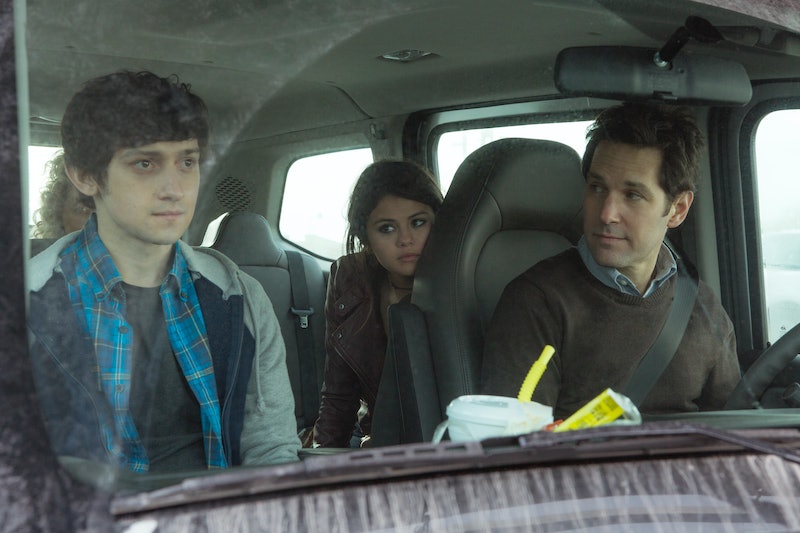 Blown through your movie ticket budget for the month? Here's an off-beat summer dramedy you can enjoy from the comfort of your own couch. The Fundamentals Of Caring premieres exclusively on Netflix on Friday, June 24. In it, ageless wonder Paul Rudd plays Ben, a former writer who's trying his hand being a caregiver to his first ever client Trevor (Craig Roberts). Trevor is as confused and frustrated as any teen, with the added complexity of his muscular dystrophy diagnosis. In an effort to connect with Trevor and shake up the boy's prescribed existence, Ben takes him on a field trip to see some of America's weirdest roadside attractions. Along the way, they pick up Dot (Selena Gomez), a guarded girl with her own crisis to overcome. Road trips can be illuminating experiences that bring disparate people closer together. (Or they can be an eight-hour fight over the USB port.) But is The Fundamentals Of Caring a true story?

The film, which screened at Sundance before Netflix secured the distribution rights, is based on a novel with a slightly longer title. The Revised Fundamentals Of Caring was written by Jonathan Evison and published in 2012. Other books by the novelist include This Is Your Life, Harriet Chance! about an elderly widow who embarks on the cruise of a lifetime and All About Lulu: A Novel about an adventurous man looking to break the spell of his unhealthy childhood. Evison seems to be interested in journeys, physical and otherwise.

The novelist didn't adapt his own work for the movie. The Fundamentals Of Caring was written and directed by Rob Burnett, who happens to be the President and CEO of David Letterman's production company, Worldwide Pants Incorporated. But Evison receives a movie credit for penning the novel the film is based on.

So, are Ben the caregiver, Trevor his charge, and Dot the hitchhiker based on real people in the author's life? The Revised Fundamentals Of Caring is a work of fiction. All of those characters and the self-edifying odyssey they embark on were created by Evison.

But according to an essay that Evison wrote for Amazon, The Revised Fundamentals Of Caring is inspired in part by a real-life tragedy that damaged his own family forever. When he was a child, Evison's 16-year-old sister was killed in an accident while away with some friends. "To this day, my family is still feeling the shockwaves," Evison writes. "I’m still walking around with this sister-shaped hole in my heart." The plot of this film and book may not resemble the author's own experience, but the themes of hope, persistence, and healing certainly do. And to Evison, The Revised Fundamentals Of Caring is a part of his own coping process. He writes:

This book represents nothing less than an emotional catharsis for its author. I wrote this book because I needed to...This novel is about the imperative of getting in that van, because you have no choice but to push yourself and drive on, and keep driving in the face of life’s terrible surprises. It’s about the people and the things you gather along that rough road back to humanity.

You can watch three broken individuals find themselves and each other when The Fundamentals Of Caring movie begins this Friday.