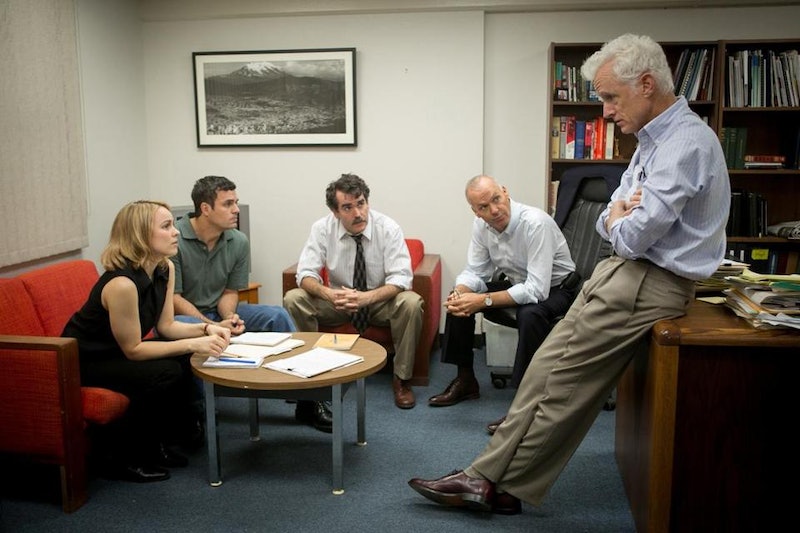 More often than not, Netflix serves as a distraction above all else. It's something people turn on to serve as background noise for when they're doing housework, or when they're about to fall asleep, or when it's time to "chill." And that's a shame because a lot of the time, Netflix has some really outstanding movies. And it just so happens that this June, Netflix is overflowing with some all-time greats. The most critically acclaimed movies on Netflix in June cover a wide range of genres and decades, and you're sure to find several that will more than justify the nine or ten bucks Netflix will draw from your checking account this month.

The films that comprise this list all have Rotten Tomato scores of at least 90 percent, showing universal critical acclaim. While there are a lot, I was shocked at the number of amazing films that didn't make the cut. Classic comedies like Clueless and Bridget Jones's Diary just missed out, as did legendary films like Butch Cassidy and the Sundance Kid and The Exorcist. Even Academy Award for Best Picture winners like Forrest Gump and The English Patient weren't loved quite enough. But the following 26 films are all adored by critics, and you can watch every single one of them on Netflix this June.

Winner of this year's Academy Award for Best Picture, this ensemble film based on the Boston Globe's investigation into the Catholic Church's sex abuse scandal hits the streaming service on June 22. Who says Netflix doesn't get any good new releases?

Jurassic World may have dominated the box office last year, but Steven Spielberg's original still stands up as one of the greatest spectacles ever put to film.

Speaking of Spielberg, the director hit gold with this 1982 film that was the rare blend of record box office performance and near-perfect critical reviews. Plus, Netflix has the original version, with not a CGI E.T. to be found!

Writer/Director Wes Anderson is no stranger to critical acclaim, but out of all his efforts this coming of age tale ranks highest among film critics.

Comedies aren't often thought of as critical darlings, but Christopher Guest mockumentaries are an exception to that rule.

6. There Will Be Blood

The legendarily selective Daniel Day-Lewis wins an Oscar for Best Actor pretty much every time he appears in a film, including in this intense drama.

Star Wars may get a lot of credit for making outer space a viable movie setting, but Kubrick's 1968 masterpiece is really where the boom began.

Like Wes Anderson, practically every film written and directed by Quentin Tarantino becomes an instant classic, but this is the one everyone points to as his greatest achievement.

A relentlessly disturbing and violent effort by Kubrick, this jarring 1971 film routinely shows up on lists of the greatest movies ever made.

Although it's probably best remembered now for Mark Wahlberg's giant prosthetic penis, the film actually received outstanding reviews upon its release back in 1997.

11. The Day the Earth Stood Still

Not to be confused with the critically-savaged 2008 remake, the 1951 original remains one of the most beloved and philosophically important science fiction films ever.

Alfred Hitchcock's favorite collaborators Cary Grant and Grace Kelly are all on board for this classic thriller.

This 1984 drama won the Oscar for Best Picture, and to date is the last film to have multiple nominees in the Best Actor category.

14. To Kill a Mockingbird

One of the most famous books of the 20th Century was not surprisingly turned into one of the greatest films of all time in 1962.

This film, along with 2012's The Hunger Games, turned Jennifer Lawrence into the world's biggest movie star after she won the Best Actress Oscar for her performance.

Audrey Hepburn and Cary Grant were quite possibly the biggest stars in the world in 1963, and both were at the top of their game in this caper.

Without Heathers there would probably be no Clueless, no Mean Girls; basically no teen comedies that don't take themselves too seriously.

You might not recognize the title of this 1950 film, but it quite possibly lent more classic lines to pop culture than any film except for Casablanca and The Wizard of Oz.

Audrey Hepburn and Gregory Peck have both already appeared on this list. Now you can see them together in what is sometimes credited as the prototypical rom-com.

This German 1927 film was considered groundbreaking on a number of levels, and was one of the first feature-length science fiction films ever made.

Westerns were pretty much a dead genre in 1992 when this Clint Eastwood film showed up to win Best Picture at the Oscars.

Stephen King may be known as the master of horror, but this non-scary drama, based upon one of his novellas, may be the best story the author has ever told.

It wasn't easy to become the first Americans in space, as this film shows.

You know what I say when someone suggests there's a better fairy tale movie out there? Inconceivable!

With these critically acclaimed films, Netflix has enough pedigree to last you through the end of June, when they'll start restocking more classics for July. Just shut up and take my money, Netflix.

More like this
15 Romantic Movies On Netflix That Are Perfect For Snuggling Up On The Couch
By Rachel Simon and Grace Wehniainen
15 Intriguing Movies On Netflix That Are Based On True Events
By Mary Kate McGrath, Shannon Barbour and Grace Wehniainen
What’s New On Netflix: 'Stranger Things' & 'Mean Girls'
By Arya Roshanian
What’s New On Netflix: The Return Of 'The Umbrella Academy'
By Arya Roshanian
Get Even More From Bustle — Sign Up For The Newsletter