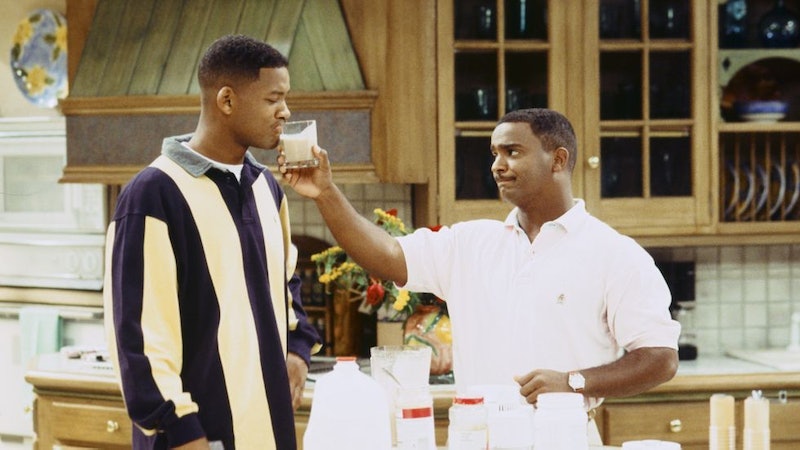 If there's one '90s show that continues to slay me emotionally whilst also delivering constant giggles, it's The Fresh Prince of Bel-Air. I really do think that, no matter how old that show becomes, there will be some episodes that will never cease to grip me and savage tears out of me. One of the main qualities of Fresh Prince that helped it to achieve this was the way that its characters were developed throughout the seasons. Though all the characters underwent huge transformations from the pilot to the finale, it was the way that Carlton changed in Fresh Prince that really, truly devastated me.

His arc somehow transformed him from a character whom you loved to hate in the early episodes to being a character whom you genuinely adored and rooted for by the end. Out of all the characters on the show, it often felt like Carlton had the most to learn. As such, he went through perhaps the most difficult transformation from being a child to being a man. His evolution was beyond positive, and made for a touching finale, when we finally said goodbye to his character and realized just how much he had grown.

1. He Wasn't Just Smart; He Was Street Smart

After multiple storylines wherein cousin Will tried to teach Carlton some essential life skills that would enable him to take better care of himself when he was out in the world, he finally seemed to learn how to protect himself from trouble, speak to people, and avoid unnecessary transgressions with the law.

2. Will Had Become His Best Friend

In the first season of Fresh Prince, Will and Carlton have a supremely antagonistic relationship based on sniping insults and basic snobbery. By the finale? Grab something to dab your eyes with, Sally, because not only did they become best friends, but they also ended up living together before leaving for college.

3. He Was No Longer Awkward Around Women

With a track record of "love interests" which included a woman who claimed that he'd fathered her child (even though he was still a virgin) and a regrettable one-night stand with a married woman, Carlton could never quite get it right with women. Still, he evolved, and by the time the final few seasons came, he was scoring dates with the postal worker delivering his mail, and even successfully making some moves one of Will's underappreciated girlfriends when he wasn't looking.

4. His Maturity Had Turned Him Into A Man To Be Proud Of

Carlton may not have gone to his dream college of Princeton, but he accepted this with far more maturely than Season 1 Carlton could have ever achieved. He attends a local, state university instead, showing that he had grown beyond the stubbornly snobby attitude he upheld during his early years.

5. His Music Tastes Had Developed

This is a bigger deal than you might think, because by the finale, Carlton impressed Will with the fact that he owned a Biggie Smalls CD. He also still owned a copy of his cherished "What's New Pussycat" CD too, but that's beside the point. The inclusion of the Biggie Smalls is a clear allusion to how Carlton had taken on some of Will's qualities, and also become a little more streetwise.

6. He Could Say With Confidence That He Had Will's Back

"Whenever, wherever," as they both told each other in the finale. And what's touching is that, as the seasons of Fresh Prince progressed, we actually witnessed many occasions of Carlton having Will's back, and vice versa. Whether it was Will taking an actual bullet in order to save Carlton's life or Carlton offering to save them both by skiing down a mountain in the middle of a blizzard, they both learned how to love and look after each other. For Carlton, this also taught him how to be a man.

Oh boy, young Carlton was not a bundle of fun to be around at all. But by the finale? That man was happy to try out new experiences, hang with anyone so long as they were good people, and have fun without doubting or complaining about every aspect of the experience.

8. His Weakness For Gambling Got Under Control

Carlton had a serious gambling problem, for real. Remember the episodes "You Bet Your Life" and "Viva Lost Wages?" Yeah, they were both focused on Carlton getting himself (and Will) into a right pickle, as they ended up owing a lot of money due to his gambling expenditures. Though there weren't tons of references made to his problem, when they were made, it was clear that he was doing everything in his power to avoid gaming venues and to keep such experiences from happening again.

9. He Gained The Confidence To Be Himself And Be Proud

Whether he was trying to impress women by showing he had more street cred or trying to fit in with subcultures that he didn't quite understand, Carlton had a problem throughout Fresh Prince with attempting to be somebody else. By the finale, though, he was nobody but Carlton — something that he was confident about and proud of.

10. Dancing Wasn't Something He Had To Hide

Need evidence of his pride and confidence? Well, look no further than how Carlton used to sneakily tiptoe down into the living room in order to dance to Tom Jones when he was younger, compared to how he owned his dance moves with Will in the finale.

11. He Had Become Less Cocky About His Financial Privilege

Carlton could be cruel to people regarding their financial position compared to his, and during early seasons of the show, he was constantly looking down at others with less financial privilege than him. However, he generally became a better person over the course of the show. When he failed to get into Princeton, he learned that this privilege couldn't buy him his dreams, or even transform his future. He had to build his own life for himself, just like everyone else.

12. He Became Less Naive About The World

From failed experiments with drugs to a night spent in police cells, Carlton was portrayed throughout Fresh Prince as being a naive puppy dog who kept getting continually kicked into reality. However, he grew up wise and knowledgeable, thanks largely to the help of Will.

I'm still holding out hope for a Fresh Prince reunion. Because if Carlton managed to change that much in those years, then just imagine how much he would have changed by now!