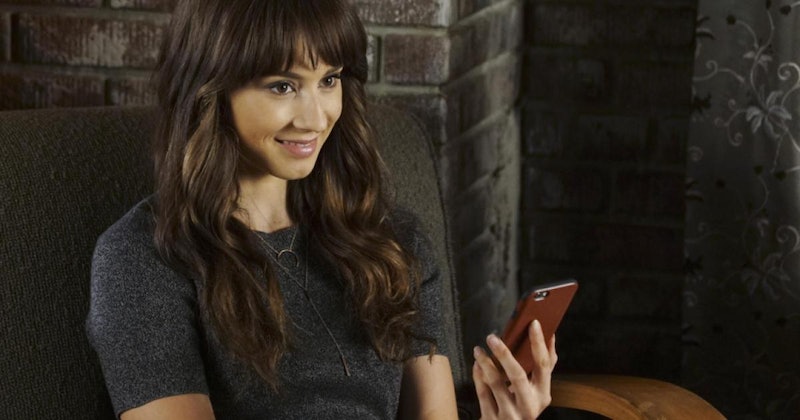 I'll be honest: I didn't think that the Season 7 premiere of Pretty Little Liars could possibly top the craziness of the Season 6 finale. After all, the Season 6 finale gave us the moment that many fans (myself included) were waiting for since the beginning of the series — the arrival of a twin in Rosewood. After about a million twin references, the show finally revealed that — surprise! — Jessica DiLaurentis has an identical twin named Mary Drake, and that Mary is Charlotte's biological mother. Season 7 definitely has a lot to live up to given the absolutely cray Mary reveal — but after watching the premiere, I'm beginning to wonder if there's a chance that Season 7 could have a twin reveal of its very own. Because clues from the Season 7 premiere of Pretty Little Liars hint that Spencer could have a twin, and it's one of the few reveals that would definitely crank the new season's crazy meter up to an 11.

Spencer having a twin might seem like a plot twist the show wouldn't pull so soon after the Mary reveal, but that could be exactly what the writers want us all to think. After all, isn't the biggest twist the one you never see coming? As insane as it might seem that one of the Liars has a twin, one scene from the premiere should have us all wondering about Spencer's situation. I'm referring to the scene from the premiere in which Hanna, who has been kidnapped by A, "dreams" of seeing Spencer in her cell. "Dream Spencer" gives Hanna advice that eventually helps her escape her prison.

But, what if it's not actually Dream Spencer giving this advice, but a twin?

The Spencer scene totally felt off to me, and not just because Spencer showed up during Hanna's time of need. Rather, it felt just a little too real — there was no change in color, light, or anything else that would indicate that Hanna was having a dream. Also, there's the fact that when Hanna closed her eyes to "go to sleep," Spencer didn't disappear, and instead just hummed a lullaby.

It wouldn't be the first time Pretty Little Liars has pulled the "it's not really a dream!" thing on us. The show most recently did this when Mary posed as Jessica during a visit to Alison in the hospital during Season 6 — in fact, that scene visually resembled the scene between Hanna and Spencer. This could be a bizarre, hyper-realistic dream brought on by Hanna's trauma, or it could hint that Spencer's twin showed up to save her twin's BFF.

There are a few other indicators that hint that this isn't the Spencer we know. The first is that Spencer refers to Uber A as "A.D." in the dream. The Liars only receive the text with the name A.D. attached after Hanna is kidnapped by the villain. How would Hanna's subconscious know to call Uber A by this name if she's never heard the new A referred to A.D. before? The second is Spencer's question to Hanna in this scene. When Hanna tells Spencer that she's "going to die" in the cell, Spencer asks Hanna if she "told them the truth," referencing the identity of Charlotte's killer. Obviously, Hanna didn't kill Charlotte, so why would her subconscious image of Spencer ask that question?

There's one final clue that Dream Spencer might be someone else entirely, and that's Spencer's hair. In the scene with Hanna, Spencer is missing her new hairstyle signature — her bangs. Why would Hanna dream up a Spencer without her new 'do? It could be because the person in the cell with Hanna isn't really Spencer at all.

Spencer having a twin would be totally mind-blowing, and might connect her back to original twin Mary in a totally bizarre way. Here's hoping that we'll find out if we're seeing double Spencer soon, because this twist might be the craziest yet.